SEOUL, South Korea — In several provinces across South Korea, there are no I.C.U. beds available to treat the rapidly rising number of Covid-19 patients. As of Monday, the government confirmed that there were only 42 beds available nationwide. In the Seoul metropolitan area, home to half of the country’s population and the majority of its recent infections, there were just six. ​

The latest explosion of coronavirus cases in South Korea has put the country on edge in a way that it has not been since the beginning of the pandemic. If cases can’t be brought under control and the strain on hospitals continues to deteriorate, the government may for the first time impose Level 3 restrictions, the highest level of social-distancing rules ​short of a lockdown in South Korea.

A quiet fear has taken hold in a country that for much of the year was held up as a model for the rest of the world. The streets of Seoul are growing more empty by the day. Supermarkets have reported brisk sales of instant noodles and meal kits. Restaurant owners are anxious they will be forced to close their doors to dine-in customers, taking orders for takeout only.

And now, the virus is even harder to contain.

“Unlike in the past, this time the virus seems to pop up everywhere and no place is safe,” said Myeong Hae-kyung, a chief nurse at the Yeungnam University Medical Center in Daegu who served on the front line when the city was the epicenter of the country’s first coronavirus outbreak earlier this year.

“In recent days, my life has been alternating just between the hospital and home. I am afraid to go anywhere else,” she said.

In this wave, hospitals are a critical focus in South Korea. The country has aimed to provide patients with hospital beds within a day of being diagnosed with the disease.

But as of Sunday, 368 patients in the Seoul Metropolitan area were still waiting at home for beds to be assigned to them. Last week, a patient in Seoul died at home while waiting for a hospital bed. Another died at home in Seoul on Sunday. 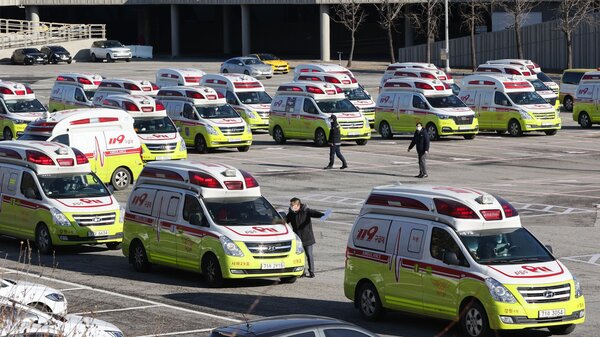 The number of ​I.C.U. ​patients tripled this month to 274 on Monday. ​Over the weekend, South Korea reported more than 1,000 new Covid-19 patients for five consecutive days, a record.

“We must secure hospital beds for critically ill patients as if ​we are fighting a war,” Prime Minister Chung Sye-kyun said on Sunday. “Each day is critical.”

The surge of infections has created a bottleneck as health officials struggle to assign a limited number of beds to patients. The government has ordered state-run and private general hospitals to convert at least one percent of their licensed I.C.U. beds for treating seriously ill Covid patients.

Health authorities expect the bottleneck to ease significantly in the coming week as more beds become available. The success of the effort will help determine if the government raises social-distancing restrictions to Level 3, under which more than 2 million additional businesses would shut down or have their operations dramatically curtailed.

“As you can see, we don’t have people coming in,” said Lee Jeong-ae, a restaurant owner in northern Seoul, as she pointed to empty tables in her restaurant. “People who suffer the most from the social distancing are small-business owners like us.”

Ms. Lee sells fish soups, roasted pork and other Korean dishes. Recently she started preparing for new restrictions by looking into bulk orders for plastic containers because restaurants like hers would only be allowed to sell takeout under Level 3 guidelines.

The Seoul metropolitan area remains under a Level 2.5, with schools, gyms, karaoke rooms, bars and other high-risk facilities closed. Restaurants, movie theaters, hair salons and many other businesses remain open, although they must close before 9 p.m.​ Coffee shops are takeout​ only.

As of Monday, South Korea has reported 698 fatalities out of 50,591 cases. Its aggressive campaign to “test, trace and treat” patients has kept its mortality rates ​comparatively low. But epidemiologists have called ​on the government to adopt Level 3​ restrictions before it’s too late.

Unlike previous waves of the virus with large clusters that officials were able to target and trace, the latest wave has spread through numerous small clusters in nursing homes, ​churches, ​prisons, saunas and small private gatherings, making it more difficult to contain.

Dr. Eom Joong-sik, who treats Covid-19 patients in Gachon University Gil Hospital in Incheon, a populous port city west of Seoul, said that the current problems reflected the government’s failure to plan ahead despite its reputation of being a leader in the pandemic.

“Experts had already warned that if a wave hit the Seoul metropolitan area, home to half of the country’s population, we could face a shortage in hospital beds there and the government needed to make a plan for that scenario,” said Dr. Eom. “Right now, we not only face a difficulty in securing hospital beds in the metropolitan area, but we also have a difficulty in transporting patients to hospitals as we see hundreds of new patients a day.”

President Moon Jae-in, who has taken pride in his government’s strategy of keeping as much of the economy running as possible while also battling the pandemic, has been reluctant to authorize Level 3. Instead, the government has ramped up its testing and isolation campaigns and introduced new social-distancing rules incrementally.

In the past week, it has tested 67,000 people a day for the virus, 10 times more than it did in October. In Seoul and nearby cities, the government has added 134 temporary testing stations to help encourage people to get free tests, even if they have no symptoms, with the hope of “preemptively” isolating ​asymptomatic cases.

As part of the government’s efforts to discourage people from spreading the disease through Christmas and the New Year, birthday parties and other private gatherings of five or more people will banned in the Seoul metropolitan area starting Wednesday.

An annual Christmas Eve gathering around a Christmas tree in the Seoul City Hall plaza has been canceled. Large churches have put up their usual Christmas decorations, yet appear deserted as prayer services with more than 20 people have been prohibited. The United Christian Churches of Korea has urged worshipers to celebrate the holiday at home by sharing carols with friends on social media.

“We will carefully prepare to adopt Level 3 in case it becomes necessary,” said Son Young-rae, a spokesman for the Health Ministry. “But we hope that the government and the people can work together to control the wave without going ​there.”