HONG KONG — The Hong Kong government on Tuesday introduced the final details of a push to drastically overhaul the city’s election system, including a proposal that would make it illegal to encourage voters to cast blank ballots or boycott elections.

The electoral changes are the latest effort by the central Chinese government to stamp out political opposition in Hong Kong, after months of fierce antigovernment demonstrations in 2019. Last month, the National People’s Congress Standing Committee, an arm of China’s Communist Party-run legislature, unanimously approved a plan that would give national security bodies the authority to select candidates for political office.

That proposal, which followed the enactment last year of a harsh national security law, dictated that less than a quarter of Hong Kong’s legislature would be directly elected, compared to half before. It also created a candidate vetting committee with the power to unilaterally bar anyone deemed insufficiently loyal to the government. And it reshuffled the membership of another election committee that selects Hong Kong’s top leader, stacking it with more Beijing loyalists.

But some details of the new system, including exactly who would sit on the reconstituted election committee, remained unclear until Tuesday, when the Hong Kong government published a bill of more than 500 pages. The bill made clear that the election committee — already tilted in favor of the central government — would be filled with even more pro-establishment business and interest group leaders, as well as members of pro-Beijing political bodies.

Also included was a proposal that would criminalize encouraging voters to cast blank or modified ballots, or to forgo voting altogether. Boycotting elections is an idea that has been discussed among some in the pro-democracy camp.

The bill is expected to be passed easily by the Legislative Council, Hong Kong’s local lawmaking body which is composed entirely of pro-establishment figures after the mass resignation of the opposition last year.

“We all want elections to be very fair, so any manipulation to jeopardize or sabotage an election should not be permitted,” Carrie Lam, the city’s chief executive, said at a news conference.

The bill also laid out dates for upcoming electoral contests. The 1,500 members of the election committee are scheduled to be elected on Sept. 19.

Legislative elections are set for Dec. 19. They had originally been slated for last September, but the government postponed the vote, citing coronavirus concerns, though opposition figures accused it of trying to forestall an election defeat. 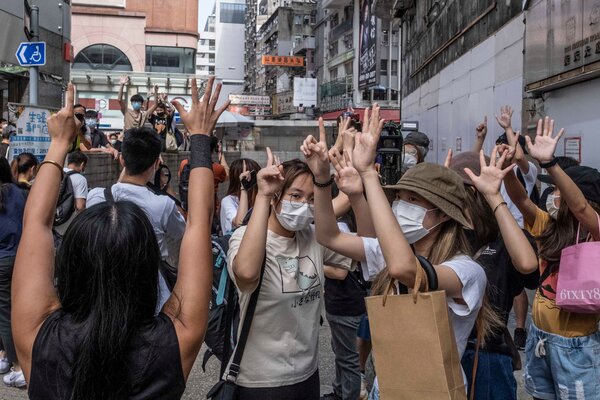 The chief executive election is scheduled to be held in March.

While the majority of the proposal focused on the composition of the election committee — which in addition to choosing the chief executive will also be empowered to fill 40 legislative seats — it also included several changes to the few remaining directly elected seats. Some geographic districts for those seats will be redrawn, combining areas that had leaned pro-democracy with those more staunchly pro-establishment.

Still, some experts said that the changes were unlikely to have much effect on the already-battered political opposition. After all, the changes to the directly elected seats could disadvantage pro-democracy candidates only if any stood for office in the first place — a scenario that seemed increasingly unlikely given the new vetting procedures, said Ma Ngok, an associate professor of government at the Chinese University of Hong Kong.

“The key issue is who in the pro-democracy camp will still run and who will be allowed to run,” Professor Ma said. “If you have already built in a very stringent screening system, then I don’t think it is actually necessary for the government to change” the system.

In the weeks since Beijing approved the electoral plans, the authorities have repeatedly said that Hong Kong’s residents had broadly embraced the changes.

But in moving to criminalize protest voting, Professor Ma said, the government seemed to be acknowledging that the changes were in fact unpopular, at least among some segment of the population.

“It seems that the government thinks that actually a lot of people will try to boycott or cast a protest vote,” he said.