SINGAPORE – Singapore should establish itself as a carbon trading and services hub, as part of a broader push to seize growth opportunities in the area of sustainability.

This was among a set of recommendations made by the Emerging Stronger Task Force to transform the country’s economy amid the pandemic, in a report released on Monday (May 17).

National Development Minister Desmond Lee, who co-chairs the task force, said Covid-19 has “crystallised” the fact that sustainability is an important and existential issue, and the growing demand for a green economy presents an opportunity for Singapore to establish itself as a first mover in this area.

There is a pressing need to establish the Republic as a sustainability hub, while fulfilling its own carbon commitments and contributing to the global agenda to tackle climate change at the same time, said the task force in its report.

The task force noted that demand for carbon services and trading is expected to increase as voluntary carbon markets scale up significantly to meet Paris Agreement goals.

Singapore is well-positioned to be a carbon services and trading hub, given its reputation as a neutral location, trusted broker and a professional services and financial hub, the task force added.

This is also in line with the Government’s push towards sustainability under the Singapore Green Plan 2030.

Carbon trading essentially treats carbon as a commodity that can be bought and sold between less and more pollutive firms.

On Monday, conservation science, technology and policy expert Koh Lian Pin, a member of the Alliance for Action (AfA) on Sustainability, said it is not only important to help businesses achieve climate goals, but also ensure transparency as firms think about investing and facilitating carbon trades as a new kind of commodity.

To that end, the AfA on Sustainability seeks to establish a carbon credits marketplace to help buyers and sellers by offering easier access and transparency.

For instance, key data could be extracted from lengthy project documents through artificial intelligence. The information is then compiled into more accessible and comparable formats, which participants can use to assess projects’ value and price them better.

The AfA has also developed GreenPass, a one-stop platform for companies to measure, mitigate and offset their carbon footprint.

To support these initiatives, there needs to be a pipeline of talent with relevant skills such as project development, financing, low-carbon advisory and trading, noted the task force.

More programmes on sustainable finance, operations, entrepreneurship and growth in the South-east Asian region, similar to the existing ones offered by the National University of Singapore and Singapore Management University, could be introduced.

At the same time, Singapore has to strengthen its food resilience, both for its own consumption and for export purposes, through agri-tech.

Even with diversification of its food import sources, raising local food production and stockpiling, Singapore remains vulnerable to the rising global demand for food and increasing uncertainty over food production due to climate change.

For instance, a fundamental problem for local production of vegetables is that indoor vertical farming for Asian leafy greens, which form the bulk of local demand of vegetables, is currently not economically viable in Singapore, noted the task force.

To combat high upfront capital and operating costs, among other challenges, existing local indoor vertical farms tend to focus on high-value crops such as kale and western spinach instead. 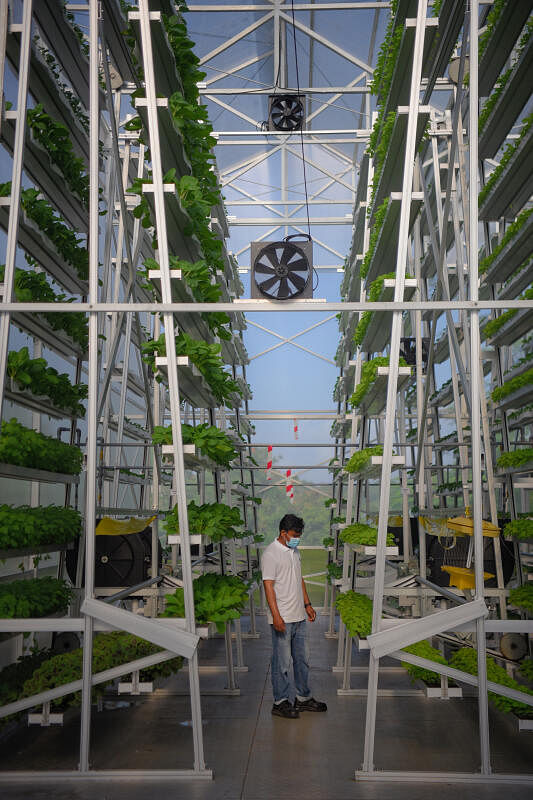 This leaves a supply gap in the local production of Asian leafy greens which cannot be filled sustainably through conventional farming techniques in the long run.

However, the AfA on Agritech is studying a new platform model that seeks to reduce production overheads, pool risks and build stronger links between local vegetable farms and other stakeholders.

If successful, it will enable a substantial proportion of leafy greens consumed in Singapore to be produced locally by 2030, and could also extend the model to other types of produce such as eggs and poultry.

“If we can do so, we would have translated our efforts to address this existential challenge into an opportunity,” said the task force.

Dr Azlinda Anwar, a task force member and director of grants and intellectual property administration and coordinating director of Temasek Life Sciences Laboratory, said that as agritech is “one of the newer kids on the block”, its work has just started.

She noted that the focus on agritech complements Singapore’s 30 by 30 aspiration – to produce 30 per cent of the nation nutritional needs locally by 2030.

In the long run, the task force hopes to change the “outdated public perception” that agritech jobs are manual and laborious.

“A vibrant agritech ecosystem will inspire and nurture a new generation of local urban farmers and enable the creation of new and better jobs in this greenfield sector,” said the task force.

Singapore also has to adopt digitalisation in sectors such as supply chain and the built environment to maximise the gains afforded by digital collaboration, said the task force.

While the built environment sector has made good progress in adopting some digital processes such as Integrated Digital Delivery and Design for Manufacturing Assembly to prefabricate building components for on-site assembly, which improves on-site productivity, more needs to be done as most built environment firms are “minimally digitalised”.

One such platform is a cloud-based solution developed by local tech company Hubble which allows architects, engineers, contractors and fabricators to collaborate digitally on their construction projects, thus reducing their reliance on paper-based processes.

The task force also aims to get 1,000 companies on board a Coalition for Built Environment Digitalisation by 2025 to encourage digital collaboration and enhance digital literacy among industry stakeholders.

To date, more than 300 companies such as CapitaLand, City Developments Limited, and GuocoLand Limited have committed to it.

Through these initiatives, the AfA targets to attain at least 70 per cent of integrated digital delivery adoption, in terms of the gross floor area of new building projects by 2025.

Task force member Lim Ming Yan, who is chairman of the Singapore Business Federation, noted that the digitalisation transformation for the sector started a few years ago, but Covid-19 has added some urgency for companies to digitalise.

“This is crucial because we need projects in order for the data standards to be adopted and trialled… it will be something that will continue to evolve, refine and be improved upon as digitalisation progress,” he said.