(Reuters) – European stocks fell on Tuesday as the double whammy from a historic plunge in U.S. crude to below zero and lackluster quarterly earnings reports spooked investors about the lasting damage to the global economy from the coronavirus pandemic. 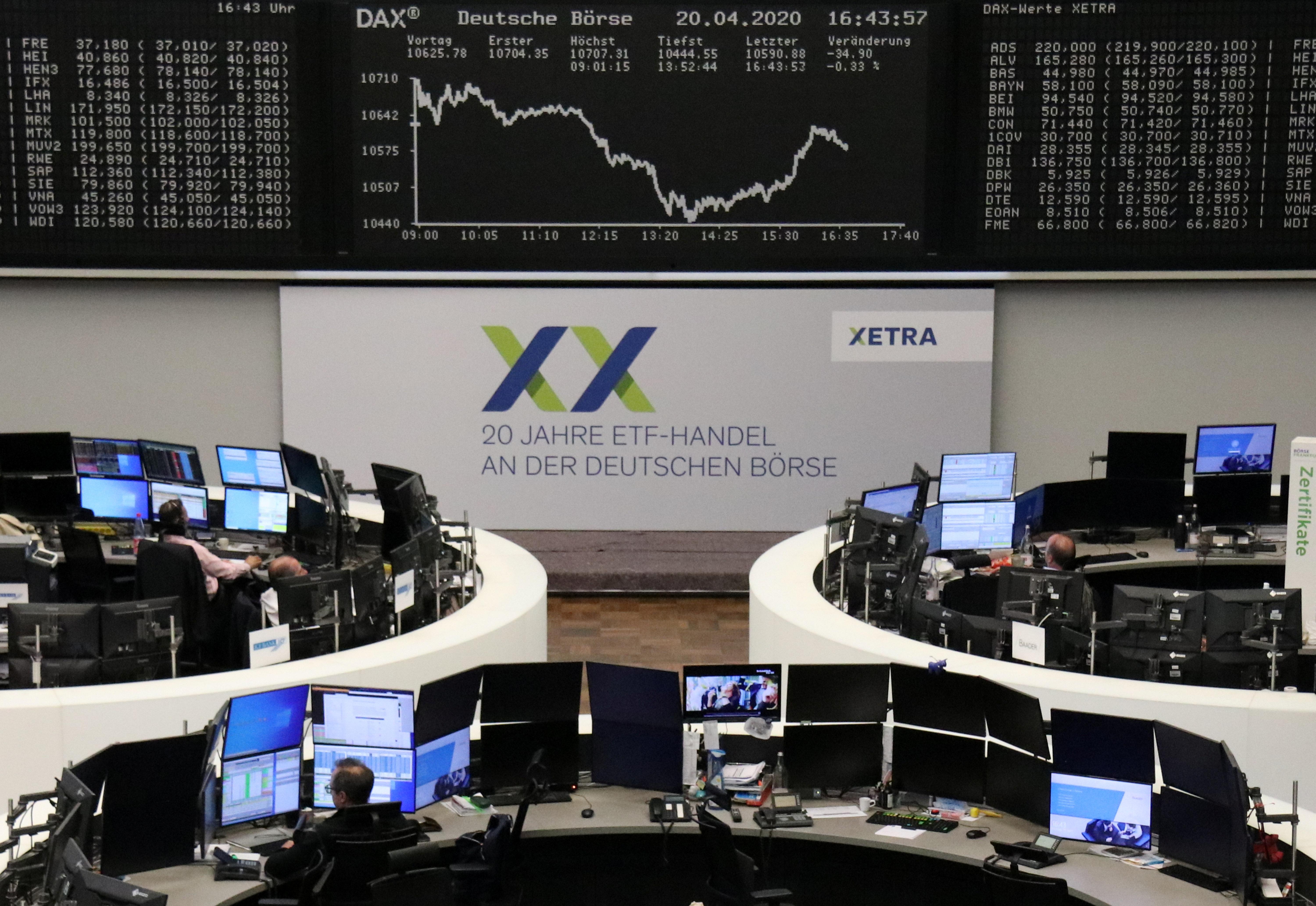 The pan-European STOXX 600 index was down 1.6%, with a more than 3% fall for BP Plc (BP.L), Royal Dutch Shell Plc (RDSa.L) and Total SA (TOTF.PA) taking the energy index .SXEP to its lowest this month.

The STOXX 600 had recovered about 25% from a March trough on a return in risk appetite after a raft of global stimulus, but investors have turned cautious again with economic data underlining the havoc wreaked by sweeping lockdown measures.

The ZEW survey on German economic sentiment due later in the day is likely to show another dismal reading after March sentiment crashed to levels last seen during the 2008 financial crisis.

“No one has a clue on how severe this slump will really be,” said Carsten Brzeski, global head of macro at ING Economics.

“For Europe, the ZEW index today will be the first of the batch of confidence indicators for April, but you see there is simply no real grip on what the (overall) numbers will be. So markets are going to continue to be extremely erratic.”

Europe’s most valuable tech company SAP (SAPG.DE) was among the top drags on the benchmark STOXX 600 after the company abruptly ended a six-month experiment in dual leadership due to the pandemic.

All the major European country indexes slipped, a day after U.S. crude CLc1 plummeted to below zero for the first time in history with a wipeout in storage capacity causing traders to flee contracts that would deliver oil barrels to them in May.

The West Texas Intermediate contract, which is set to expire on Tuesday, recovered to briefly trade above $1 but left investors fearful about a deep global recession as the near halt in business activity crushes both supply chains and oil demand. [O/R]

“The ‘supply shock’ from the OPEC+ collapse in March was really a mirage, the demand shock from COVID-19 is overwhelming everything,” said David Winans, principal of U.S. investment grade credit research at PGIM Fixed Income.

“Ultimately, the path for oil prices is going to follow the path of this virus and until demand shows some sign of life, oil prices will likely remain on life support.”

The first-quarter earnings season also kicked into high gear with a batch of multinational firms scrapping dividends and withdrawing financial forecasts to deal with the fallout of the pandemic.

Primark owner Associated British Foods (ABF.L) slipped 2.4% after saying it would not pay an interim dividend and could not provide a full-year earnings forecast for the fashion retailer.

Finland’s Wartsila (WRT1V.HE) tumbled 6.3% to the bottom of the STOXX 600 after posting a 45% drop in quarterly profit.