SRINAGAR, Kashmir — Fears of communal violence were once again raised in the disputed region of Jammu and Kashmir on Thursday when a grenade blew up at a crowded bus stand, killing one person and wounding many others.

The violence followed a week of hostilities in Kashmir between India and Pakistan, both of which claim the mountainous region.

On Thursday, witnesses said that a young man lobbed a grenade toward a crowd of people, including many students, who were waiting for a bus in central Jammu, one of the larger cities in the Indian-controlled part of Kashmir.

“There was a loud bang — everything went black in front of my eyes,” said Sat Kumar, a trader, who was taken to the hospital along with two dozen others who were injured in the attack, some critically.

The young man who threw the grenade got away, and Indian police officials said they did not know his identity. 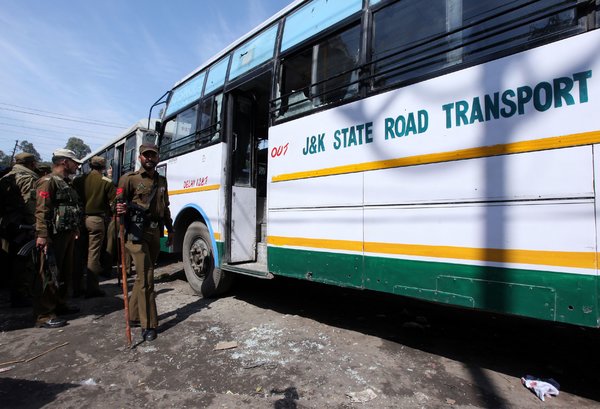 Police officials said it was possible that the attack was connected to militants fighting against Indian rule in Kashmir. Last month, a young Kashmiri separatist blew up a bus full of Indian soldiers, setting off a sharply escalating military crisis between India and Pakistan, which India blames for supporting separatist militants.

India and Pakistan have feuded for decades, and both wield nuclear arms. Other countries, including the United States and China, have urged the two sides to step away from conflict. The crisis was somewhat defused late last week after Pakistan returned an Indian pilot whose plane it shot down over Kashmir.

Some in the region wondered whether the bus stand attack might be connected to India’s coming elections and a nefarious effort to provoke animosities between Hindus and Muslims in the country. The Jammu area is predominantly Hindu, while the larger Jammu and Kashmir region is majority Muslim. Jammu has a history of religious tensions erupting into violence.

M.K. Sinha, a police official in Jammu, urged people to remain calm. “The culprits will not be spared,” he said.

India and Pakistan continue to eye each other warily, and artillery shells continue to fly across the disputed border in Kashmir. Last week, shelling killed several people on both sides of the border.

In Lucknow, a large city in northern India, the police arrested four people on Thursday on suspicion of beating up Kashmiri street vendors after a video went viral that showed the attack.

Wearing saffron shirts, the color favored by many Hindu nationalists, the suspects called the street vendors “terrorists” and said, “You sell here and throw stones there,” referring to protests in Kashmir.

The suspects slapped the Kashmiri men in the face and hit them with a long wooden stick.

After the Indian convoy was attacked in mid-February, hundreds of Kashmiri college students at universities in India were chased off their campuses, and some were beaten up. And in New Delhi, the capital, some Kashmiris were thrown out by their landlords simply for being Kashmiri.