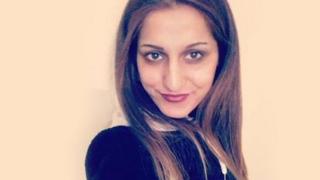 A court in Pakistan has acquitted the father, brother and uncle of a woman who died in a suspected honour killing last year.

Sana Cheema, 26, lived in Italy but died while visiting her family in Gujrat in April 2018.

She was originally buried without an autopsy – but when exhumed a cause of death was identified as strangulation.

It was widely reported that she had been brought back to Pakistan for an arranged marriage, but refused.

Her friends also alleged Ms Cheema had wanted to marry a Pakistani-Italian man in Italy – a match her family objected to.

Ms Cheema was born in Pakistan, but lived in the northern Italian city of Brescia for most of her life.

After she died during a visit back to her home country, her family blamed natural causes and buried her locally.

Her death attracted a mass of attention on Italian social media and newspapers there reported it as a suspected honour killing,

After the outpour, Pakistani authorities exhumed Ms Cheema’s body. They found her voice box was swollen and a neck bone had been dislocated – suggesting strangulation.

Three members of her family, including her older brother Adnan and father Ghulam Mustafa Cheema, were then arrested on suspicion of involvement.

All three were acquitted in a district court in Gurjrat on Friday, due to lack of “certain evidence”.

Police had alleged that a confession was given, then retracted, during the investigation, Pakistani media reports.

Italian Interior Minister Matteo Salvini tweeted about the case, saying: “What a shame! If this is ‘Islamic justice’ there it’s scary. A prayer for Sana”

Viviana Beccalossi, a regional politician from Brescia, told Italian media that Ms Cheema had been “killed twice” with the news.

Human Rights Watch says that violence against women and girls remains a serious problem in Pakistan.

Activists believe about 1,000 “honour killings” are carried out across the country every year.