Movie theaters in China are being ordered to screen patriotic films with titles like “The Sacrifice” and “The Red Sun.” Elementary students in some cities are being told to create paintings and calligraphy extolling the “Chinese dream.” Buses and subways are broadcasting nationalistic messages about revolutionary heroes.

China’s Communist Party is gearing up for a patriotic extravaganza to celebrate the 100th anniversary of its founding on July 1. Officials are going into overdrive to make sure commemorations go off without a hitch — and hammer home the message that the party alone can restore China to what Beijing considers the country’s rightful place as a global power.

While much of the focus will be on the past, the party’s centenary will have significant repercussions for China’s future. The celebrations will give China’s top leader, Xi Jinping, a forum to present himself as a transformative figure on par with Mao Zedong and Deng Xiaoping. Mr. Xi, 67, is maneuvering to stay in power indefinitely, an effort that appears to have taken on greater urgency as a new American president builds alliances to curb Beijing’s influence.

“We need to educate and guide the whole party to vigorously carry forward the red tradition,” Mr. Xi said during a recent conference call with political leaders about the centenary, according to People’s Daily, an official newspaper.

Chinese officials, using the slogan “Follow the Party Forever,” are keen to trumpet China’s strength in a pandemic-ravaged world and justify the party’s increasingly tight grip on daily life in China.

The news media is devoting special coverage to China’s battles against extreme poverty and corruption. Universities are putting on plays about young lovers killed in the 1920s for their Communist activism, and state-run theaters are resurrecting Mao-era operas. 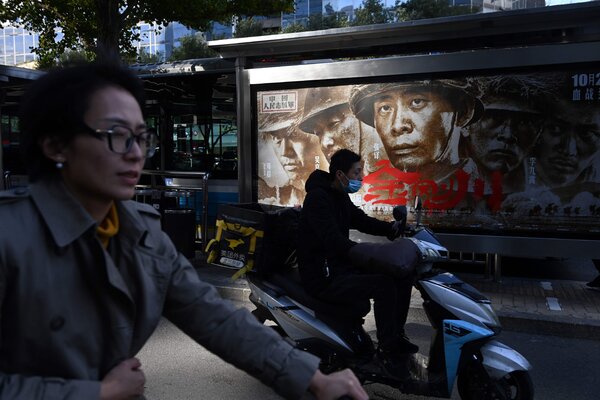 Officials in the southern city of Nanjing are offering a perk for residents eager to show their love for the party ahead of its big birthday: a free wedding ceremony in June for 100 couples (hotel, makeup and dresses included). The party’s more than 91 million members receive priority. Recently married couples can apply.

Yan Dianjian, an official in Nanjing, said in a telephone interview that the ceremony was meant to “send a tribute” to the party on its birthday. He said party slogans had inspired several themes for the event, including a play on one of Mr. Xi’s hallmark phrases, “Always remember your original mission. Love follows.”

As the government pushes pomp and propaganda ahead of the anniversary, the authorities are simultaneously stepping up efforts to limit dissent. The Ministry of Civil Affairs is leading a nationwide crackdown against “illegal” nonprofit organizations, including religious and social groups, as part of efforts to ensure a “good environment” for the centenary.

Officials have also warned of consequences for those who “distort” party history or “defame” Communist heroes ahead of the centenary. The Cyberspace Administration of China, which regulates the internet, recently unveiled a website and hotline for citizens to report “historical nihilists” and encouraging the public to help root out those who “deny the excellence of advanced socialist culture.”

Officials in the eastern province of Jiangsu this month detained a 19-year-old man, accusing him of posting comments offensive to China about Japan’s occupation of Nanjing before World War II.

The campaign against such dissent reflects concerns among China’s top leaders that the party must do more to strengthen public loyalty and fortify its control of society.

Mr. Xi has long warned that Communist rule could disintegrate if the party does not assert control across society, including the private sector, schools and the news media. Party organs at the national and local levels are hosting study sessions on party history for cadres. Chinese military officials say they are using the centenary to “forge absolute loyalty” to the party and Mr. Xi.

“They are worried about a collapse at any time, that a small protest could trigger an avalanche of a revolution,” said Wu Qiang, a political analyst in Beijing. “They have tried their best to eliminate all noise, dissent and objections.”

Mr. Xi’s government seems nervous about even voices from within the party establishment ahead of the centenary. The authorities recently deleted an article by Wen Jiabao, a former Chinese premier, from several websites without explanation. Mr. Wen, in a tribute to his mother published in a Macau newspaper, wrote about the need for fairness, justice and equality in China.

The occasion also provides Mr. Xi an opportunity to project strength on the global stage. China’s party has now outlasted its Soviet counterpart to become the longest-ruling Communist Party in history. Party officials are eager to promote China’s top-down system as a model for other countries and a rival to Western-style democracy.

China’s rivalry with the United States will be a powerful undercurrent in the party’s grand celebration. President Biden, describing the need to “prove democracy works,” has sought to bring an alliance of countries together to counter China’s hardening authoritarianism. Many Chinese officials and scholars believe the United States is trying to thwart China’s rise.

“No person and no force can stop the march of the Chinese people toward better lives,” says an official slogan for the centenary.

The party aims to seize on the anniversary to make the case for the party’s continued leadership in the 21st century, said David Bandurski, co-director of the China Media Project, a research program affiliated with the University of Hong Kong.

“There is clearly an effort to make a strong emotional appeal for unity around the party in order to propel China’s development and its rise as a global power,” Mr. Bandurski said.

The centenary will also be critical to the political fortunes of Mr. Xi, one of China’s most influential leaders in recent history. Mr. Xi is moving closer to claiming a third five-year term at a party congress next year. In 2018, the party cleared the way for Mr. Xi to stay in power indefinitely, abolishing term limits that had served as a check on leaders after Mao and Deng.

“Neither party politicians nor the urban public are enthusiastic about his abandoning the two-term limit, so Xi has to win their support and root out any potential opposition,” said Susan Shirk, chair of the 21st Century China Center at the University of California San Diego. She called the centenary a “crucial part” of Mr. Xi’s campaign for another term.

Mr. Xi is already looming large in discussions about the milestone. Government officials have spoken about the importance of promoting Xi Jinping Thought, his political doctrine, ahead of the centenary. Mr. Xi will preside over the festivities, hand out medals to exemplary party members and deliver a speech.

As it tries to win more followers, the party is infusing popular culture with talk of the centenary.

Television networks are releasing documentaries and dramas related to the anniversary, such as “Minning Town,” a popular series that depicts the party’s poverty alleviation work in Ningxia, a region in northwest China.

The government has instructed thousands of movie theaters across the country to screen propaganda films at least twice a week until the end of the year. Local officials are expected to mobilize party members and others to attend the screenings to “enhance their social impact,” according to a notice issued by China’s National Film Administration.

Local governments, facing pressure from Beijing, are working feverishly to add party-themed activities to the calendar. Businesses are signing up employees for extracurricular lessons on party history and visits to famous revolutionary sites.

“I’m tired to death,” wrote a commenter on Weibo, a popular social media site. “I won’t have any time of my own by the end of April. This centenary of the party’s founding is so troublesome.”