BEIJING — In 2006, three Chinese Christians traveled to Washington to ask President George W. Bush for his support in their fight for religious freedom. One of them had converted to the faith only a few months earlier: Wang Yi, a 33-year-old lawyer from the southwestern city of Chengdu.

But Mr. Wang had already become such a prominent Christian that organizers made sure he went to the White House. A nationally known essayist and civil rights lawyer, he would soon found a 500-member church that was independent of government control, along with a seminary, an elementary school and even a group to aid the families of political prisoners — all illegal but which he accomplished by sheer force of will.

Today, Mr. Wang, now 45, is back in the spotlight, this time at the center of an intense crackdown on Christianity. His Early Rain Covenant Church and others like it are popular among China’s growing middle class and have resisted government control, testing the ruling Communist Party’s resolve to bring China’s churches to heel.

“He saw an inevitable fight with the government because of it trying to control the churches,” said Enoch Wang, a pastor based in the United States who has met Wang Yi many times. “He knows that sooner or later they’ll come for you and so there’s no point in trying to hide.”

That was one reason Wang Yi has in recent years become a vocal critic of President Xi Jinping’s moves toward authoritarianism.

Last December, he and 100 church members were detained. Although most have been released, Mr. Wang, his wife and 11 others are still being held incommunicado without access to a lawyer.

The charges against Mr. Wang and his wife — inciting to subvert state power — typically result in lengthy prison sentences. The same charge was used to sentence Liu Xiaobo, a dissident, to 11 years in prison in 2009. He was later awarded the Nobel Peace Prize and died in custody in 2017.

According to church members who were detained and subsequently released, the police are also investigating Mr. Wang and two junior pastors for economic crimes such as whether they broke Chinese law by publishing books and DVDs without government approval.

Many congregants who have been released have lost their jobs and housing over their church membership. Others have been sent back to their hometowns or had their bank accounts frozen. Mr. Wang’s 11-year-old son now lives with his 74-year-old grandmother.

The crackdown is part of a broader effort to subdue China’s fast-growing religious groups. This includes detaining a million minority Muslims in internment camps in China’s far west, a drive that has drawn international condemnation.

But while Islam is practiced by about 20 million non-Chinese minorities in largely far-off provinces, Protestant Christianity is followed by about 60 million ethnic Chinese in China’s economic heartland. About half worship in churches that raise their own money and run their own affairs.

In the past, many of these were called underground churches, but over the past decade, some have become public megachurches. Run by well-educated white-collar professionals in China’s biggest cities, the churches own property and have nationwide alliances — something anathema to the party, which tightly restricts nongovernmental organizations.

Also targeted in the crackdown were the 1,500-member Zion Church in Beijing, which was closed in September, and the Rongguili Church in Guangzhou, which attracted thousands of worshipers each week.

Unlike the old underground churches, these independent churches wanted to be public.

“They want to be the city on the hill,” said Fredrik Fallman, a professor at the University of Gothenburg in Sweden who studies contemporary Chinese Christianity. “But this is the basic fear of the Communist Party — people organized independent of the party in a structured way.” 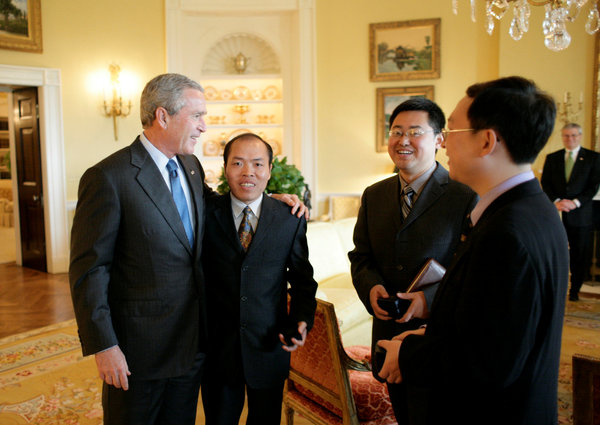 Since Mr. Xi took power in 2012, the party has ramped up efforts to promote ideas such as the glory of traditional China and respect for authority.

Christians like Mr. Wang have challenged this top-down ideology. Many are interested in socially engaged models of Christianity, especially the Protestant denomination of Calvinism.

“Traditionally, Christians in China were mainly concerned with saving people’s souls,” said Yu Jie, an exiled essayist who helped convert Mr. Wang in 2005. “But Wang Yi and others like us, we don’t think the world is hopelessly corrupt. We want to improve it, and so there’s an emphasis on issues like public service and justice.”

Born in 1973, Mr. Wang grew up in the rural Chinese county of Santai. He met his wife in elementary school — and wrote in an essay that he was immediately infatuated with her.

He was 16 when the government crushed pro-democracy protesters near Tiananmen Square in Beijing. That event shaped his life, pushing him to a career in law and an interest in justice.

All of this meant his church was unusually active in sensitive areas.

It set up a group that helped the families of political prisoners by regularly visiting them and paying their children’s college tuition. The church also helped fund a homeless shelter and protested the ubiquitous use of abortion in Chinese family planning.

Mr. Wang, a pastor, also held prayer services for the victims of the June 4, 1989, massacre of the Tiananmen protesters. In one widely circulated photo, he is wearing his pastor’s collar and holding a sign that says, “June 4. Pray for the Country.”

He also became a sharp critic of Mr. Xi, especially after presidential term limits were lifted last year, allowing him to serve a third term and to potentially rule for life.

In response, Mr. Wang circulated a message calling Mr. Xi a “usurper” who was “not amending the Constitution but destroying it.”

Some in his congregation objected to his overtly political message. Two years ago, another pastor left Early Rain to start his own church, criticizing some of Mr. Wang’s statements as stunts. But others in the church thought they were necessary.

Mr. Wang’s bluntness made him one of the most polarizing figures in Chinese Christianity. When the government began reducing the public face of Christianity in one province by tearing crosses off the steeples of even government-run churches, Mr. Wang expressed no sympathy for the churches affected. Instead, he said their pastors were wrong for serving in churches controlled by the government.

Mr. Yu, the writer, said he wondered if his old friend was wise in confronting the government so openly.

“As a pastor, you do have a responsibility to protect your members,” Mr. Yu said. “Given the conditions in China, it’s something one can consider.”

But Mr. Wang had long anticipated his detention over the question of state control.

In a 2017 sermon, he asked his congregation what he should do if the government demanded even limited control over their church: Should he agree and avoid persecution, or resist?

He joked that some people might ask him if he couldn’t make a few compromises.

“We’ve got an 80-year-old grandma at home and we just had a child!” he said, anticipating the argument.

But then Mr. Wang argued against this sort of accommodation.