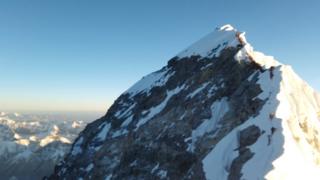 Over the past two decades, the average annual death rate of climbers on Mount Everest has remained at about six.

But this spring, at least 10 people have already been reported dead or missing on the world’s highest peak.

This is also the season that saw a record 381 climbing permits issued by the Nepalese government.

In reality, this means about 600 people were preparing to embark on the climb, with permit holders accompanied by support staff up the mountain.

While overcrowding has been blamed for the increase in the number of deaths, there are also other factors at play.

Many of the climbers began gathering at Everest base camp at the start of May. At the same time, the authorities were concerned about the knock-on effects of Cyclone Fani which had already struck India and Bangladesh.

The weather deteriorated in the Nepalese Himalayas days after the cyclone, forcing the government to suspend all mountaineering activities for at least two days.

Nearly 20 tents at the camp were blown away by strong winds and after the warning, several climbers, who were already en route to some of the higher camps, returned to base camp.

Prolonged bad weather meant that the practice of fixing bolted rope to assist climbers trying to reach the summit was delayed.

Meanwhile the crowd at base camp continued to build.

Everest – which lies on the border between Nepal and China – can be reached from the Chinese side as well. However, the Chinese government issues fewer permits, and many mountaineering experts find the climb less interesting.

After the ropes were fixed by mid-May, the first feasible clear-weather window was 19 and 20 May.

But only a few teams chose to climb then while the majority waited for the second window – from 22 to 24 May.

Mountaineering experts say this was when the crowd management went wrong.

Climbers had to wait for hours below the summit – both on the way up and on the way down.

Many of them were exhausted and their oxygen cylinders were running low.

Nepal’s mountaineering regulation requires expedition teams to have liaison officers on the mountains.

This time 59 of them were appointed to accompany the teams but only five of them stayed until the final part of the climb.

Some did not even turn up, while most of those who did went home after a few days at the base camp.

These are often regular government officials who have no mountaineering experience, so they find it difficult to cope with the high altitude.

They get paid by expedition teams and most of them are happy to stay at home.

If all the liaison officials had stayed on the mountain, managing the crowd would have been much easier, a top government source at Everest base camp told the BBC.

“We could have spread the teams so that the first feasible window (19-20 May) would have seen more climbers and the pressure would have been less during the second window,” they said.

“Since almost none of these liaison officials stayed, it became very difficult for the limited officials to handle this huge number of climbers.”

Liaison officials not turning up has been an issue ailing Nepal’s mountaineering industry for years now.

Meera Acharya, head of the mountaineering section at Nepal’s tourism ministry, said 80% of the appointed officials did go to the base camp this time.

“But I admit that not all of our liaison officials stayed there for long. We are aware of this issue and we are working to address it.”

“We do hear of deaths of climbers on Mount Kilimanjaro as well, why is Everest being singled out here?”

Mountaineering experts say there is also an increase in the number of inexperienced climbers joining the growing crowd on Everest.

This time round, many of them had just one Sherpa guide with their team, officials at the base camp said.

“When you have a dangerous situation like this, one Sherpa will not be able to help you much because he will have to take care of himself.”

Some of the mountaineers who successfully returned after summiting said they had seen climbers struggling because they were running out of oxygen – they had to wait much longer.

“This new generation of climbers, eager to bag the top and brag back home, didn’t know enough to understand the difference between climbing Everest and Makalu (Mount Makalu, the 5th highest peak southeast of Everest),” says Alan Arnette, an experienced mountaineer and writer on mountaineering issues.

“They joined a random team of individuals with shared logistics for an independent climb. They didn’t understand the word ‘independent’ and had no experience to evaluate the risks.”

The quest to get anyone willing to pay has been mainly down to intense competition between operators, particularly old and new ones.

With the entry of new expedition operators offering cheaper prices, mountaineers say even some of the established ones have been forced to cut their fees.

“As a result, you see agencies hiring inexperienced people as guides who cannot offer the right guidance to their clients when they have a situation like this,” said Tshering Pande Bhote, vice president of Nepal National Mountain Guides Association.

“Unfortunately the competition is for volume and not for quality.”

Expedition operators admit there are problems but they argue they also need to increase the number of visitors for the growth of the industry.

“Next year, for example, is Visit Nepal Year (a mega-tourism campaign that aims to bring in two million tourists),” says Dambar Parajuli, president of the Expedition Operators Association of Nepal.

“So we will need to have more visitors, including mountaineers, but clearly how we manage traffic jams like this remains our major challenge.”