Even in China, where propaganda has become increasingly pugnacious, the display was jarring: A photograph of a Chinese rocket poised to blast into space juxtaposed with a cremation pyre in India, which is overwhelmed by the coronavirus. “Chinese ignition versus Indian ignition,” the title read.

The image was quickly taken down by the Communist Party-run news service that posted it. But it has lingered as a provocative example of a broader theme running through China’s state-run media. Official channels and online outlets often celebrate the country’s success in curbing coronavirus infections, while highlighting the failings of others. Other comparisons in recent months include depicting crowds of shoppers or jubilant partygoers in China versus desolate streets and anti-lockdown protests abroad.

The example contrasting China with India was posted on Saturday on Weibo, a popular social media service, by a news service of the ruling party’s powerful law-and-order commission. The post drew a backlash from internet users who called it callous, and it was taken down on the same day.

But it has kindled debate in China about attitudes toward India, and the tensions between Beijing’s nationalist rhetoric at home and its efforts to promote a humbler, more humane image abroad.

The controversy created an unusual rift between two of China’s most voluble nationalist media pundits. Hu Xijin, the chief editor of the Global Times, an influential party newspaper, condemned the post for damaging China’s standing in India, while Shen Yi, an academic in Shanghai, derided critics with a coarse term that means something like “pearl clutchers.”

“Can so-called expressions of sympathy for India achieve the anticipated outcome?” Mr. Shen said in one of his online responses to Mr. Hu. China, he suggested, should be more relaxed about flexing its political muscle. “Where can an 800-pound gorilla sleep?” he wrote. “Wherever it wants to.” 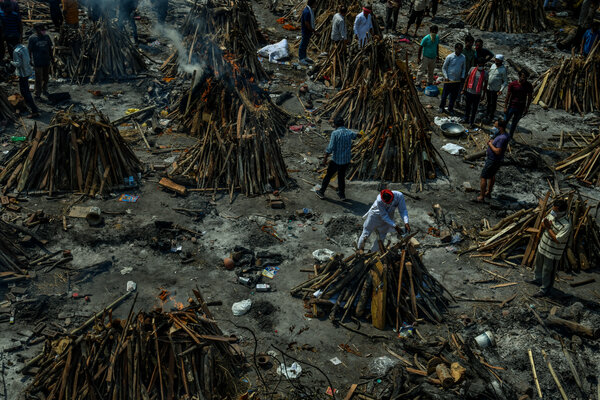 Chinese leaders have expressed sympathy and offered medical help to India, and the controversy may soon pass. But it has exposed how swaggering Chinese propaganda can collide with Beijing’s efforts to make friends abroad.

“You’ve had this growing tension between internal and external messaging,” said Mareike Ohlberg, a senior fellow in the Asia Program at the German Marshall Fund in Berlin who studies Chinese propaganda. “They have an increasing number of interests internationally, but ultimately what it boils down to is that your primary target audience still lives at home.”

The Chinese news outlet that put out the image is among a plethora of party-backed media operations that have stepped up efforts to promote government policies, burnish the image of the top leader Xi Jinping, and hit back against foreign critics of the Communist Party.

In principle, the online operations answer to the Communist Party’s Department of Propaganda and its legions of censors. In practice, the outlets may buck at constraints as they compete to demonstrate their dedication and influence, Ms. Ohlberg said. The demand for images and reports that draw a big public following “incentivizes people to put out messages that grab attention rather than smooth things over diplomatically,” she said.

Officials at the Chinese Foreign Ministry have also increasingly put out tweets, social media posts and speeches that vigorously defend Beijing, especially against Western criticisms of the government’s draconian policies in the far western region of Xinjiang and the crackdown in Hong Kong. This combative style, widely described as “wolf warrior” diplomacy, has won praise at home, but drawn anger abroad.

In France, the Foreign Ministry summoned the Chinese ambassador to Paris in April last year after his embassy’s website wrote that French nurses had abandoned residents in nursing homes, a claim the government denied.

In Australia, Prime Minister Scott Morrison held a news conference late last year to demand an apology from China after Zhao Lijian, a Chinese foreign ministry spokesman, posted a doctored image on Twitter that depicted an Australian soldier holding a knife to the throat of an Afghan child.