KABUL, Afghanistan — Gunmen laid siege to Afghanistan’s largest university on Monday, killing at least 19 people and wounding more than a dozen others, officials said, as rising violence in the Afghan capital resulted in carnage at an educational center for the second time in just over a week.

The attack at Kabul University on a warm fall day dragged on for hours as Afghan forces and U.S. troops moved to root out the gunmen, who had quickly spread across campus, detonating explosives and firing their weapons.

Video and photographs posted to social media showed students scrambling for cover and clambering over walls to get to safety. Sporadic gunshots echoed in the background.

Fardin Ahmadi, a social science student, said he was stuck in his classroom for two hours, until Afghan forces evacuated him and several others. “The situation was very bad,” Mr. Ahmadi said. “Every single student wanted to save their own life; we had forgotten about anything else.”

The exact number of dead and wounded was murky, as the attackers were still barricading themselves in classrooms four hours after the first shots rang out. Obaidullah Meraj, a doctor at the Ali Abad hospital, said that ambulances had transferred several wounded people, including students and professors from the university. More than 20 students and faculty members were held hostage at one point during the siege.

“During the attack on Kabul University, unfortunately, 19 were killed and 22 others were wounded,” said Tariq Arian, a spokesman for the Ministry of Interior.

The attack — the latest sign that spiraling violence in the Afghan countryside has made its way to the capital — followed a suicide bombing on Oct. 24 at an educational center in western Kabul. More than 40 people, most of them high school students from the Shiite Hazara ethnic minority, died in the attack, for which the Islamic State claimed responsibility.

Kabul University lifted its coronavirus restrictions in recent months, and thousands of students were most likely on campus at the time of the attack, spread among classrooms, dorms and a book exhibition highlighting authors from Iran and Afghanistan. 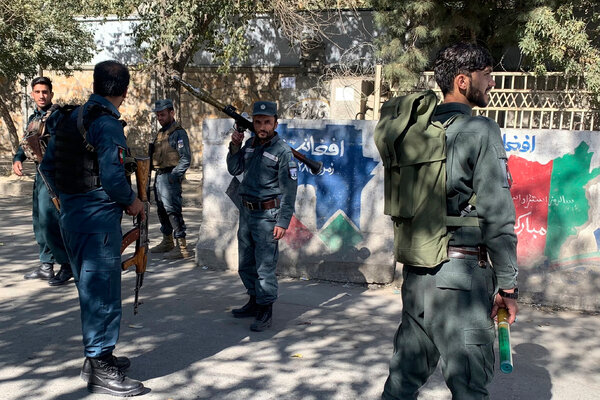 In 2018, a suicide bombing that killed dozens, claimed by the Islamic State, took place near Kabul University. In 2016, the Taliban attacked the American University of Afghanistan in Kabul, killing 13.

The Islamic State has staged numerous high-profile attacks in Kabul in recent years, often striking government postings and Shiite Muslims at schools, places of worship and other easily infiltrated — or “soft” — targets.

Over the past three years, concerted U.S. and Afghan military campaigns beat back the Islamic State’s offshoot in Afghanistan, hemming in what remained of the extremists in the country’s mountainous east. But the group still maintains capable terrorist cells in cities like Kabul, protected by secure messaging apps and careful communication with outside leadership.

Islamic State tactics have often mimicked those introduced by the Taliban, especially the Haqqani network, a group known for its ruthlessness, criminal networks and close ties to Al Qaeda.

But after the February agreement between the Taliban and the United States over the drawdown of American troops, the Taliban has reduced attacks on cities, replacing them with targeted killings that go unclaimed and offensives in the country’s rural areas.

The attack on the university followed the deadliest month in Afghanistan for civilians since September 2019, according to data compiled by The New York Times. At least 212 people were killed in October, and, according to recently released United Nations data, about 2,100 Afghan civilians died and 3,800 were wounded in the first nine months of the year.

After the February agreement, the Taliban and the Afghan government came to the negotiating table in September. But any hope of a quick resolution to the conflict has since faded, with negotiators from both sides still deadlocked in preliminary discussions on the rules and regulations that will govern future negotiations.