For decades, Hong Kong’s movie industry has enthralled global audiences with balletic shoot-em-ups, epic martial-arts fantasies, chopsocky comedies and shadow-drenched romances. Now, under orders from Beijing, local officials will scrutinize such works with an eye toward safeguarding the People’s Republic of China.

The city’s government on Friday said it would begin blocking the distribution of films that are deemed to undermine national security, marking the official arrival of mainland Chinese-style censorship in one of Asia’s most celebrated filmmaking hubs.

The new guidelines, which apply to both domestically produced and foreign films, are the latest sign of how thoroughly Hong Kong, a semiautonomous Chinese territory, is being reshaped by a security law enacted last year to quash antigovernment protests.

With the blessing of the Communist government in Beijing, the Hong Kong authorities have changed school curriculums, pulled books off library shelves and moved to overhaul elections. The police have arrested pro-democracy activists and politicians as well as a high-profile newspaper publisher.

And in the arts, the law has created an atmosphere of fear.

The updated rules announced Friday require Hong Kong censors considering a film for distribution to look out not only for violent, sexual and vulgar content, but also for how the film portrays acts “which may amount to an offense endangering national security.”

Anything that is “objectively and reasonably capable of being perceived as endorsing, supporting, promoting, glorifying, encouraging or inciting” such acts is potential grounds for deeming a film unfit for exhibition, the rules now say.

The new rules do not limit the scope of a censor’s verdict to a film’s content alone.

“When considering the effect of the film as a whole and its likely effect on the persons likely to view the film,” the guidelines say, “the censor should have regard to the duties to prevent and suppress act or activity endangering national security.”

A Hong Kong government statement on Friday said: “The film censorship regulatory framework is built on the premise of a balance between protection of individual rights and freedoms on the one hand, and the protection of legitimate societal interests on the other.”

The vagueness of the new provisions is in keeping with what the security law’s critics say are its ambiguously defined offenses, which give the authorities wide latitude to target activists and critics. 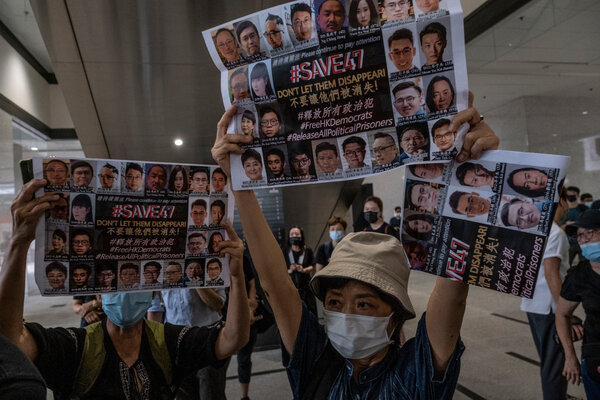 “How do you raise funds?” asked Evans Chan, a filmmaker who has faced problems screening his work in Hong Kong. “Can you openly crowdsource and say that this is a film about certain points of view, certain activities?”

Even feature filmmakers, he said, will be left to wonder whether their movies will fall afoul of the new law. “It’s not just a matter of activist filmmaking or political filmmaking, but the overall scene of filmmaking in Hong Kong.”

At its peak during the decades after World War II, the city’s film industry enjoyed huge influence across the moviegoing world, churning out popular genre flicks and nurturing auteurs like Wong Kar-wai and Ann Hui. The influence of Hong Kong cinema can be seen in the work of Hollywood directors including Quentin Tarantino and Martin Scorsese, and in blockbusters such as “The Matrix.”

More recently, Hong Kong’s political turmoil has been of intense interest to artists and documentarians, even if their work has sometimes struggled to be shown before audiences.

A screening of a documentary about the 2019 protests was canceled at the last minute this year after a pro-Beijing newspaper accused the film of encouraging subversion. The University of Hong Kong urged its student union to cancel a showing of a film about a jailed activist.

The screening went on as planned. But a few months later, the university said it would stop collecting membership fees on the organization’s behalf and would stop managing its finances as punishment for its “radical acts.”