HONG KONG — The Hong Kong government on Friday called for the city’s public broadcaster to be more tightly supervised by government-appointed advisers, in what pro-democracy activists say is the authorities’ latest move to limit freedom of the press.

The government issued a 157-page report accusing Radio Television Hong Kong, an outlet that has often reported critically on officials, of lacking transparency and objectivity.

The report came hours after the government announced that the head of the public broadcaster would leave his post six months early. His replacement is a civil servant from outside the broadcasting service with no journalism experience.

For supporters of Hong Kong’s beleaguered pro-democracy movement, RTHK’s troubles signaled the fate of independent journalism under an intensifying crackdown on dissent. Often compared to the BBC, the broadcaster is government-funded but is promised editorial independence in its charter.

During and after the huge antigovernment protests of 2019, the broadcaster investigated police inaction during a mob attack on pro-democracy protesters, and its reporters grilled top government officials.

Those programs made RTHK a favorite target for pro-government figures, especially over the past year as Beijing has enforced a wide-ranging security law to stifle protests and intimidate critics. 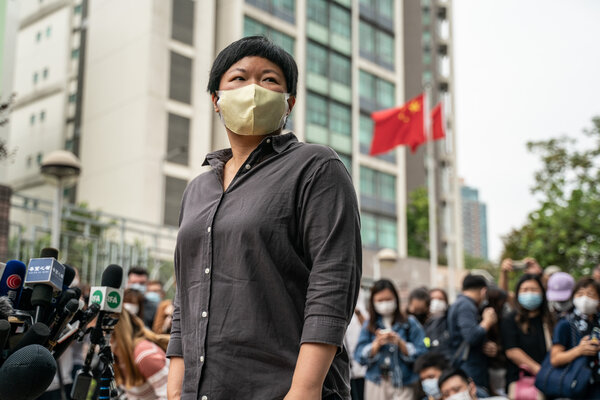 Hong Kong’s communications authority last year ordered the broadcaster to discipline employees on a political satire program after ruling that a skit had insulted the police force. (The program itself was later suspended.) In August, RTHK removed a podcast that featured an interview with a well-known activist after the authorities warned that it could violate the security law.

Three months later, the police arrested Choy Yuk-ling, an award-winning RTHK producer who had made the documentary about the mob attack.

One prominent establishment lawmaker has suggested that RTHK be folded into the government’s public relations department. Pro-Beijing figures have filed thousands of complaints against the station and staged protests outside its offices.

Carrie Lam, Hong Kong’s chief executive, said this month that the number of substantiated complaints against RTHK in recent years was “unacceptable.”

“My position is that RTHK greatly needs to be improved,” she said. “There are many things in Hong Kong that need to be set right.”

The government’s report was the product of a seven-month review, which officials announced last spring in response to “wide public concern” about the broadcaster’s performance. The review was led by a senior civil servant, Jessie Ting Yip Yin-mei, whom Mrs. Lam said was known as her “favorite.”

The report called RTHK’s editorial processes “seriously inadequate” and said that there was no clear mechanism to ensure “proper handling of sensitive/controversial issues.” It also accused RTHK of offering “no assurance” that public complaints were investigated impartially.

It criticized the broadcaster for not actively seeking advice from its government-appointed Board of Advisers. The board is led by figures with close ties to Beijing.

The report said that RTHK should keep written records of how coverage decisions are made, cultivate a stronger relationship with the advisory board and ensure that the editor in chief plays a more active role in shaping coverage.

Some wonder how that more active role will play out under the newly announced head, Patrick Li. While the departing editor in chief, Leung Ka-wing, had worked as a reporter and editor at multiple news organizations, Mr. Li, currently the deputy secretary for home affairs, does not have a journalistic background.

The government did not explain Mr. Leung’s early departure but said that his contract had been “resolved early by mutual consent.”

In a brief note to employees, Mr. Leung wrote that he was grateful for five and a half years leading the station and was at peace despite some turbulent times, according to a Facebook post by RTHK.

Edward Yau, the Secretary of the Commerce and Economic Development Bureau, said at a news conference on Friday that RTHK had been led by non-journalists before. He said the department, which oversees the broadcaster, had sought an internal successor but did not find a suitable candidate.

Mr. Yau added that the editor in chief would not be solely responsible for steering programming, though he criticized the existing leadership for adopting a “more passive role.”

The report’s findings were framed as recommendations rather than orders, and officials said there was no set timeline for enacting them. RTHK said in a statement that it would “carefully study and follow up” on the report.

Mr. Yau emphasized that RTHK would maintain editorial independence. But, he added, “there will never be editorial autonomy without responsibility, freedom without restraint.”