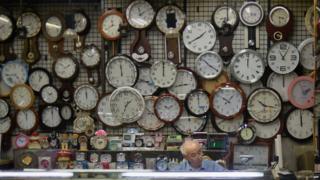 There is now Pyongyang Time to add to Greenwich Mean Time, Eastern Standard Time and Lord Howe Standard Time. Time zones are as much about politics, diplomacy and rebellion as they are about … the time.

The division of the world’s time into neat longitudinal sections has been a messy affair.

This is the story of humanity’s endeavours to manipulate time.

It is how 12:00 Greenwich Mean Time is also 22:30 in Lord Howe Standard Time (Lord Howe Island lies in the Tasman Sea between Australia and New Zealand), which is 17:14 on the moon in the (unofficial) Lunar Standard Time.

In the beginning it was the trains that confused everyone

Railways, which have powered countries’ economic growth, have played a huge role in spurring the world towards standardising time.

With advances in railways and shipping in the 19th Century, long distance travel became faster and time differences became more noticeable. And as railway systems grew, so did the need for a common time.

In the US, each town set its own clock, leading to massive confusion among passengers and train operators. Train operators whittled it down to 100 time zones, before eventually adhering to four zones across the US.

In China they tried to simplify it all into one zone

China is another vast country which shares a single time zone – but it spans far more longitudes, which has resulted in some quirky schedules.

The whole country keeps to Beijing time, including those living in the opposite end of the country in the western province of Xinjiang. This means many start their day and end work late – a normal lunch hour is at 2pm – and in the summer you could see sunset at midnight.

The decision to have a single time zone is political – aimed at fostering national unity when the Communists took control of the government in 1949 – though many in Xinjiang, which is home to a significant Muslim Uighur population, adhere to Xinjiang time as a form of quiet rebellion.

Politics was why Samoa decided in 2011 to cross the international dateline to be on the same side as Australia and New Zealand, with which it has close ties. As a result Samoa never experienced 30 December 2011.

Geography does sometimes play a huge part, as in the case of Nepal.

While nearly all countries have hourly time zones – some are half-hourly – Nepal is one of only two places in the world that has a quarter hourly time zone, the other being the Chatham Islands (although Eucla in Western Australia unofficially uses GMT+8:45).

Nepal is 5 hours and 45 minutes ahead of GMT, because it sets the meridian of Nepal Standard Time at Gaurishankar, a mountain east of Kathmandu.

The odd time difference between Nepal and India has resulted in a national joke that Nepalis are always 15 minutes late (or, Indians are 15 minutes early).

It gets trickier in the North and South Poles, where all the longitude lines converge and thus the poles don’t officially have time zones.

In the North, several countries have set up scientific research stations which follow their respective countries’ times.

The South Pole only has one research station, owned by the US – but they use New Zealand time because researchers fly into the station from Christchurch.

We had world enough and time, but then… the moon

Not content with our time on Earth, mankind has also attempted to impose the structure of time on the Moon.

Following the US Moon landing on 1969, astronomer Kenneth L Franklin of the US Hayden Planetarium invented a watch for Moon walkers in 1970 for the brand Helbros.

He came up with a measure of time called a lunation – 29.530589 earth days, or the period it takes to go around Earth. “The watch has not yet become a big seller,” noted one obituary.

But what time do the astronauts on the International Space Station observe, as they traverse all the world’s zones in their orbit?

Though they arrive acclimatised to Kazakhstan time, because they depart from that country, everyone, rather fittingly, eventually synchronises to Coordinated Universal Time.