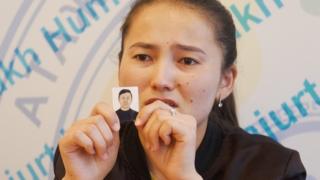 The Chinese government calls them free “vocational training centres”; Aibota Serik, a Chinese Kazakh whose father was sent to one, calls them prisons.

Her father Kudaybergen Serik was a local imam in Tarbagatay (Tacheng) prefecture of China’s western Xinjiang region. In February 2018 the police detained him and Aibota hasn’t heard from her father since then.

“I don’t know why my father was imprisoned. He didn’t violate any laws of China, he was not tried in a court,” she says, clutching a small photo of him, before breaking down in tears.

I met Aibota together with a group of other Chinese Kazakhs in Almaty, Kazakhstan’s largest city. They gathered in a small office to petition the Kazakh government to help secure the release of their relatives who had disappeared in “political re-education camps”.

The UN Committee on the Elimination of Racial Discrimination has heard there are credible reports that around one million people have been detained in internment camps in Xinjiang. Almost all of them are from Muslim minorities such as the Uighurs, Kazakhs and others.

There are more than a million Kazakhs living in China. After the collapse of the Soviet Union, thousands moved to oil-rich Kazakhstan, encouraged by its policy to attract ethnic Kazakhs. Today, these people feel cut off from their relatives who stayed in China.

Nurbulat Tursunjan uulu, who moved to the Almaty region in 2016, says his elderly parents are unable to leave China and come to Kazakhstan because the authorities took away their passports.

Another petitioner, Bekmurat Nusupkan uulu, says that relatives in China are afraid to talk on the phone or on the popular Chinese messaging app WeChat. And they are right to be afraid, he says.

“My father-in-law visited me in February 2018. From my place, he called his son in China, he asked how he was and so on. Shortly after that his son Baurzhan was detained. He was told that he had received phone calls from Kazakhstan two or three times and was sent to a political camp.”

Human Rights Watch says detainees are held “without any due process rights – neither charged nor put on trial – and have no access to lawyers and family”.

Orynbek Koksybek is an ethnic Kazakh who spent several months in camps.

“I spent seven days of hell there,” he says. “My hands were handcuffed, my legs were tied. They threw me in a pit. I raised both my hands and looked above. At that moment, they poured water. I screamed.

“I don’t remember what happened next. I don’t know how long I was in the pit but it was winter and very cold. They said I was a traitor, that I had dual citizenship, that I had a debt and owned land.”

None of that was true, he says.

A week later Mr Koksybek was taken to a different place where he learnt Chinese songs and language. He was told he would leave if he learnt 3,000 words.

“In Chinese they call it re-education camps to teach people but if they wanted to educate, why do they handcuff people?

“They detain Kazakhs because they’re Muslims. Why imprison them? China’s aim is to turn Kazakhs into Chinese. They want to erase the whole ethnicity,” he says.

It is not possible to independently verify Orynbek Koksybek’s story, but his account is similar to many documented by Human Rights Watch and other activists.

The Chinese embassy in Kazakhstan has not replied to the BBC’s request for comment, but the Chinese authorities have been quoted in state media as saying the camps are “vocational training centres”, which aim to “get rid of an environment that breeds terrorism and religious extremism”.

The Kazakh government says that any restrictions on Chinese citizens in China are their internal matter, and it does not interfere. However, Kazakhstan says it will try to assist any Kazakh citizens who are detained in China.