On the afternoon of July 11, 1948, regiments of the newly formed state of Israel advanced toward the village of Lydda. They would conduct an operation there that, by many accounts, became formative to their new state and to the conflict that has continued ever since, and that echoes in the violence raging this week in that very same town, now known as Lod.

The year before, United Nations investigators had visited what was then British-controlled Palestine and declared that Jews and native Palestinians could not peacefully coexist. Sectarian conflict had been worsening since the 1920s. The U.N. passed a plan to partition the territory between an independent Palestine and a newly formed Israel. Civil war broke out. Six months later, in May 1948, neighboring Arab states rejected the U.N. plan as colonial theft and invaded to prevent its execution.

Two months later, Israeli forces arrived at Lydda with the town posing a dilemma for their newly formed state. Its residents were Palestinian. But, geographically, it was to be Israeli, located midway between Tel Aviv and Jerusalem. Could towns like this be integrated into a democratic, multicultural Israel? Or were they a barrier to a definitively Jewish state? Even a threat within?

Historians still debate the degree to which what happened next was planned, spontaneous, or a mix of both. But they agree that the events in Lydda have echoed ever since.

Israeli forces, breaching the town, exchanged fire with local militiamen. The assault left nine Israeli soldiers dead and killed more than 100 residents, some of them children and old people, according to one estimate.

The next day, two Jordanian armored vehicles, separated from their unit, wandered into Lydda. Residents and Israeli troops, mistaking it for the start of a wider assault, resumed fighting. The soldiers threw hand grenades into homes and fired an anti-tank shell at a mosque crowded with civilians. Official Israeli accounts say that they killed over 200 civilians, though some historians put the number higher.

David Ben-Gurion, Israel’s prime minister, ordered his forces to expel the remaining residents. Though about a thousand stayed behind, tens of thousands were marched to the Jordanian lines 11 miles away. Lydda was, in subsequent years, repopulated mostly by Jewish immigrants. 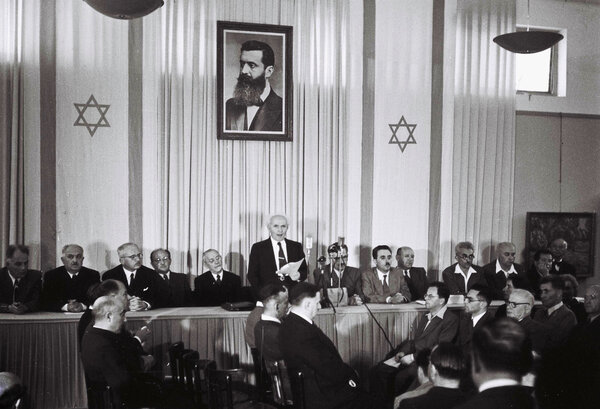 Today, it is known by its Biblical name, Lod. It is also one of several Israeli cities referred to as “mixed” for its one-third-or-so Arab minority. This week, Lod and other mixed cities erupted in a kind of conflict that has been rare since 1948: communal violence between Jews and Arabs.

It began, by most accounts, with Arab protests in solidarity with Palestinians in Gaza and in East Jerusalem. Though the details of what happened next are disputed, it escalated to outright fighting between protesters, Israeli police and Jewish ultranationalists.

By Wednesday night, Arab and Jewish mobs were roaming the streets of mixed cities, setting fires and attacking locals. Neighbor turned on neighbor. Israeli leaders have described “lynchings” on both sides. Lod’s mayor put the town under police lockdown, calling violence there “civil war” and “a complete loss of control.”

For all that has happened between 1948 and 2021, Lod still represents much of what has remained consistent about the conflict in Israel and the occupied territories, and an issue at its core.

Since early Zionist leaders decided on the location for their new nation, it was to be three things: democratic, demographically Jewish, and located in the stretch of land that locals and Zionists alike called Palestine. Lydda was perceived, at the time, as both an obstacle to securing those aims and symbolic of the ways in which they were in tension.

“If a Jewish state was to exist in Palestine, an Arab Lydda could not exist at its center,” Ari Shavit, an Israeli writer, wrote in a 2013 history.

Some Israeli historians, like Ilan Pappé of the University of Exeter, argue that the mass expulsion was a premeditated policy of ethnic cleansing aimed at removing Palestinians from what was to be the new Jewish state. Others hold that Lydda’s purge was done in the heat of battle. Benny Morris, in his history of the 1948 war, concluded that “although an atmosphere of what would later be called ethnic cleansing prevailed during critical months,” it never became formal policy, which explains why some Arab towns’ inhabitants were expelled and others were not.

Still, the Israeli commander who conducted the purge of Lydda told Mr. Shavit that he believed that Israel would not survive “if it did not first rid itself of the Palestinian population that endangered it from within.”

Some, including Mr. Shavit, have argued that this was necessary to create a viable Israel. Others have countered that less extreme methods might have secured a Jewish state there, such as tolerating a larger Arab minority or not pushing Israeli borders so far beyond those demarcated by the United Nations. As Mr. Morris found, even as early Israelis purged some Arab towns, they integrated others like Haifa and Jaffa.

There have been, from the earliest Zionist arrivals in Ottoman Palestine, differing visions of the enterprise. Some called for multiethnic coexistence, others for an explicitly Jewish state. Some urged privileging equality, others special rights for Jews. Some treated the Holocaust as a lesson that ethnic cleansing was never acceptable, others as a mandate to secure a Jewish state whatever the cost. Each implied its own answer to a dilemma like Lydda.

The Israeli-Palestinian conflict is many things. But, in some ways, it is a cycle, from 1948 through today, of Israeli efforts to impose the vision chosen for Lydda, and many times since, followed by Palestinian resistance that is sometimes nonviolent and sometimes violent.

That has been the pattern in Jerusalem, which Israel considers its capital but was divided in 1948. Israel occupied the predominantly Palestinian eastern part of the city in 1967, asserted sovereignty over it in 1980, and since then has allowed or encouraged Jewish settlers to move in. This month’s crisis was triggered by an order to evict six Palestinian families from their East Jerusalem homes to make room for settlers.

It has also been the pattern in the West Bank, which Israel has occupied since 1967, putting its Palestinian residents effectively under Israeli control without representation in that government and without rights equal to those of Israeli settlers. And also in Gaza, which Israel, along with Egypt, keeps under a crippling blockade. Israel and Gaza’s ruling party, Hamas, endlessly toggle between conflict and uneasy truce.

And history is coming full circle: this pattern increasingly applies within Israel itself, whose population remains about one fifth Arab. In 2018, Israel formally declared the right of national self-determination to be “unique to the Jewish people.” The next year, its prime minister, Benjamin Netanyahu, wrote on social media, “Israel is not a state of all its citizens” but only of its Jews. Arab citizens have unequal rights, according to rights groups.

Much as with the expulsions of 1948, there is a blurry line between matters of top-down policy and bottom-up actions by Israel’s citizens. Settlers flow into parts of the West Bank that are considered crucial for the establishment of a Palestinian state, making that less viable. In recent years, according to Israeli media reports, Israeli nationalists have begun moving to mixed cities like Lod in large numbers, making them more Jewish.

Violent Palestinian groups like Hamas also help drive the cycle. In any conflict, the extremists on one side empower those on the other, creating conditions where force seems like the only option against an implacable foe. Still, even in Gaza, Israel exercises significant control, dictating which goods and people can enter or leave and, with drones circling overhead, which buildings can stand and which will crumble.

The violence in Lod this week is a continuation of that cycle. It is a reaction, by both Arabs and Jews, to the violence playing out yet again in East Jerusalem and Gaza, heightening a sense of existential sectarian conflict. Residents say it is also a reaction, more specifically, to the escalating demographic contest for control of mixed cities, and growing hostility to the Arab minority.

Perhaps most significantly, Lod, both in 1948 and today, represents what may be one of the biggest hurdles to lasting peace: the status of millions of Palestinians considered by the United Nations to be refugees from their homes in what is now Israel — from towns like Lod. Many demand the right to return, which Israel opposes because it could reduce, or even imperil, Jews’ numerical supremacy.

The mob violence this week is a demonstration of how a decision made about Lod in 1948 — to treat a Palestinian community as a threat to the existence of Israel — still resonates in powerful ways today.

It was never inevitable, early Zionist leaders argued and rights groups today still maintain, that a significant Palestinian population and the state of Israel would be irreconcilable. But 70-plus years of treating them as such — even if there were also moments when Israelis and Palestinians did try hard to square them — has deepened that tension.

This week, in cities like Lod, Israel exploded into communal violence of a sort that the 1948 war was supposed to end, but instead eventually helped to bring back.