SINGAPORE – As the coronavirus and its variants continue to keep businesses and borders shut and halt economic growth, thousands of people in Asean have digitalised to stay afloat.

The speed at which they did so was blistering – but it was not fast enough. And many believe they will need to digitalise further to build on incomes and savings in the coming years.

Widespread recognition of the crucial role of digitalisation for economic recovery emerged as one of the key findings of one of the largest surveys of Asean youth, conducted by the World Economic Forum (WEF) and Singapore-based Sea, which owns e-commerce platform Shopee and digital financial services firm SeaMoney.

Nearly 86,000 people in six countries were surveyed in July and August for the Asean Digital Generation Survey: Pathway To Asean’s Inclusive Digital Transformation And Recovery report.

Eighty-five per cent of the respondents and 87 per cent of the MSME (micro, small and medium enterprise) entrepreneurs surveyed saw digitalisation as the way forward for economic recovery – which many believe will take quite a while.

Furthermore, the survey also showed that those who were “more digitalised” tended to be more economically resilient while grappling with the pandemic.

Most MSME owners agreed that digitalisation would help them save time and automate production processes, and that it provides ease of access to information, more options to select goods and services as well as the ability to generate an alternative income.

“Reaching the post-pandemic world will be no easy feat,” wrote the authors of the report, Dr Santitarn Sathirathai, Sea’s group chief economist, and Mr Joo-Ok Lee, head of the WEF’s regional agenda for the Asia-Pacific and a member of its executive committee.

“Nearly 70 per cent of respondents expect the pandemic to last beyond 2021, with 39 per cent expecting it to last for three years or longer and 13 per cent believing the pandemic would never end.

“However, once it does, nearly two-thirds think that life will be significantly different compared with pre-pandemic times,” they added.

The results of the survey were released in partnership with The Straits Times at a webinar on Wednesday (Oct 13).

The survey results come as many countries of South-east Asia are still grappling with Covid-19 following the rapid spread of the Delta variant of the virus.

“Some 60 per cent of people reported a decline in income and savings, with over 40 per cent saying it was a significant deterioration,” said the authors.

“Beyond its economic impact, many respondents, particularly women, reported declines in social, mental and physical health outcomes during the pandemic.”

In terms of adapting to restrictions and the new economic climate, 64 per cent of those polled said they digitised more than half their business tasks. For MSME owners, this was 74 per cent. 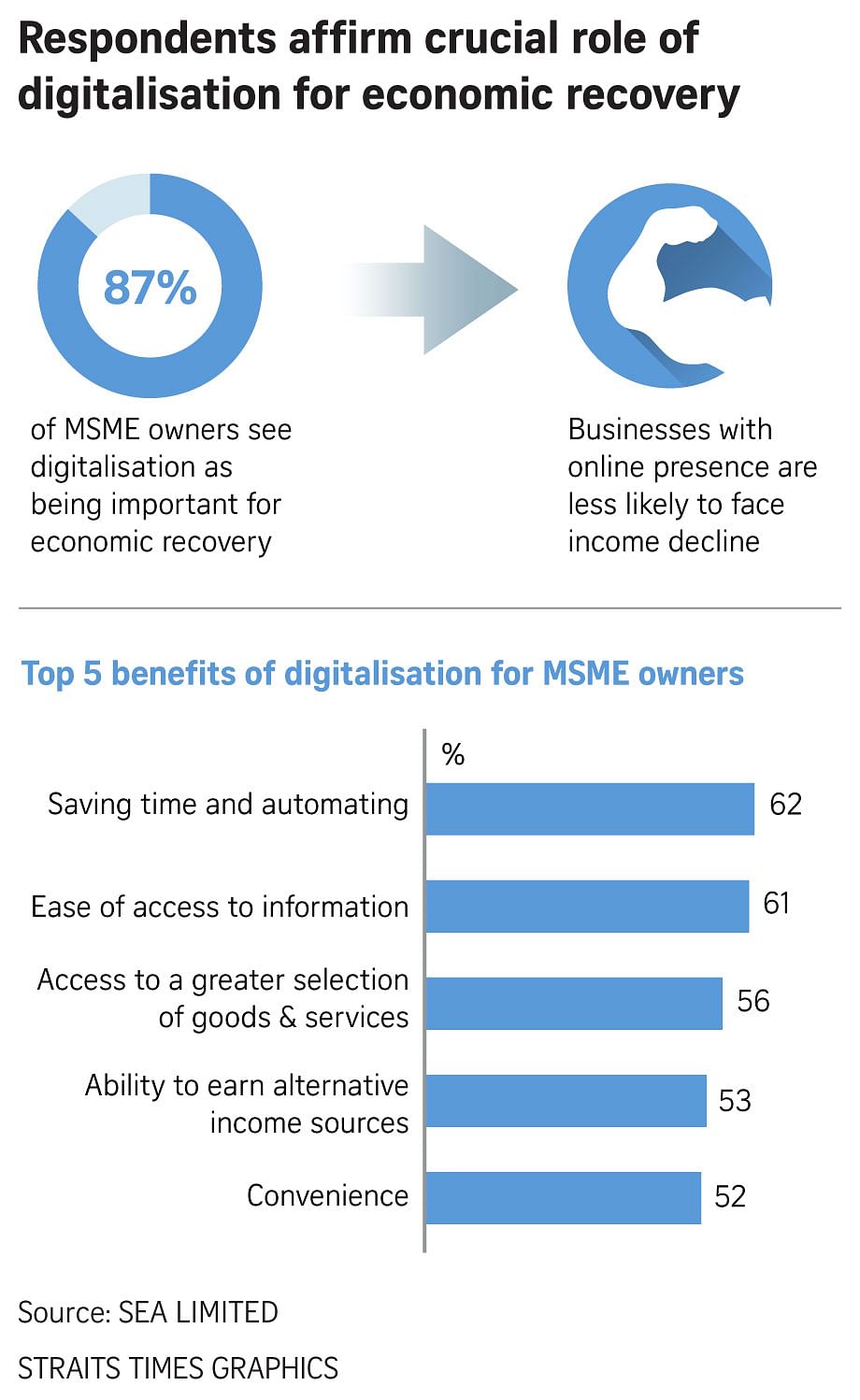 Amid the pandemic, 27 per cent of those polled created a new business, 12 per cent created employment for another individual and 25 per cent started a new job.

Nearly 50 per cent of those in the wholesale and retail trade sector started a new business, while the logistics sector had the highest share of people finding new jobs at 36 per cent.

Looking ahead, 43 per cent to 66 per cent of respondents want to increase digitalisation even further. The figures are even higher for MSME owners – ranging from 51 per cent to 75 per cent.

A key deterrent remains access to digital infrastructure and digital devices. There were also concerns about digital trust and security.

Dr Sathirathai and Mr Lee said there is a continuing strong need for the reskilling and upskilling of the Asean workforce.

“Technology use, creativity and innovation, self-discipline, and resilience and adaptability were considered to be the most important skills to succeed in the post-pandemic world,” they noted.

However, less than half of those polled consider themselves proficient in the skills they deemed important.

“The complexity and cross-cutting nature of challenges require joint efforts and collaboration across sectors and countries to address the gaps,” the authors said, adding that policies are needed to enable a more sustainable, inclusive recovery for Asean as a whole.

This is the fourth year that the Asean Digital Generation Survey has been conducted to understand aspirations and perspectives of youth in the Asean region.

Respondents were from Indonesia, Malaysia, the Philippines, Singapore, Thailand and Vietnam.