Police arrest two and launch special probe after an inspector was killed during mob violence over alleged cow slaughter. 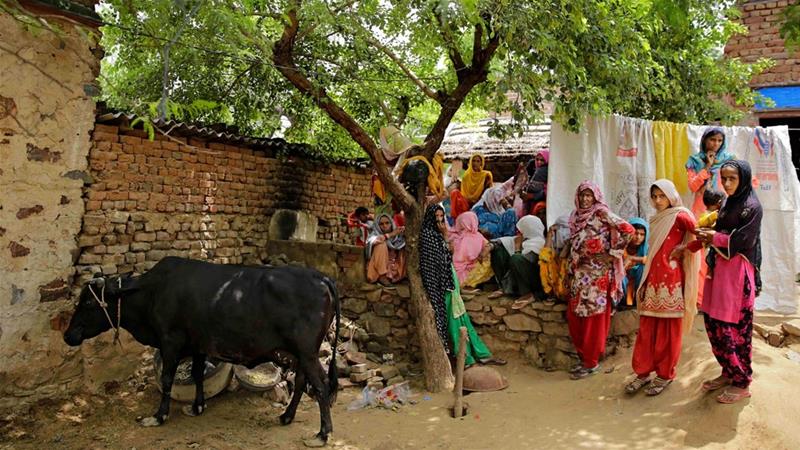 At least two people have been arrested in connection with the killing of a police officer during a mob violence in India’s Uttar Pradesh state, officials have said.

A Special Investigation Team (SIT) has been constituted to probe the cause of the violence in Bulandshahr district, senior police officer Prashant Kumar told local ANI news agency.

Police have filed cases against at least 27 people, including a Hindu far-right leader, in connection with the violence that saw a police station torched by the angry crowd.

Hundreds of paramilitary forces have been deployed in the area, said ADG Law and Order Anand Kumar.

Inspector Subodh Kumar Singh and a 20-year-old man had died after a crowd of about 400 people, who were protesting against an alleged cow slaughter, turned violent in Bulandshahr, about 80km southeast of the national capital, New Delhi.

“We sent police teams to control the crowd after we heard protesters pelted stones and some even opened fire,” Jha told DPA news agency by phone.

“It is not clear this was firing from the crowd or the police,” he said, adding the protests subsided by early evening.

According to local media reports, the deceased officer had investigated the infamous 2015 lynching of Mohammed Akhlaq in Dadri town of the state before he was transferred.

At least 39 people have been killed in cow-related violence in India since 2014, when Prime Minister Narendra Modi’s Bharatiya Janata Party (BJP) came to power, according to data portal IndiaSpend.

Modi has condemned the attacks and promised tough action against the perpetrators, but opposition leaders accuse the BJP governments – federal and in various states – of indirectly supporting the cow vigilantes.

“It’s a shocking state of affairs… Who gives these people the authority to take law in their hands?” Kapil Sibal from the opposition Congress party told ANI.

In July, India’s Supreme Court requested that the government enact new legislation to control the increasing mob violence and lynchings over alleged cattle theft, eating beef, child kidnapping and other crimes, often aided by fake news, in the country this year.