Thousands of security forces deployed as top court set to decide the fate of the site disputed by Hindus and Muslims. 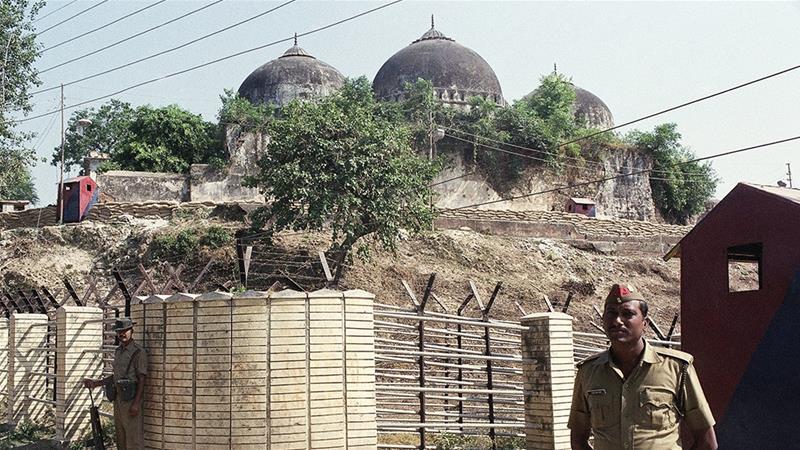 India has deployed more than 5,000 troops and police in the northern town of Ayodhya in advance of an expected Supreme Court ruling on Saturday over control of a religious site disputed by Hindus and Muslims.

Muslims said they prayed at the medieval era Babri Mosque for centuries until idol of Ram deity was surreptitiously placed inside the mosque in 1949.

Hindus believe that the mosque was built under Mughal ruler Babur after destroying a Hindu temple. In 1992, Hindu mobs demolished the Babri mosque, and constructed a makeshift temple of Lord Ram, a physical incarnation of the god Vishnu, who is believed to have been born at the site.

The destruction of the 16th-century mosque sparked nationwide Hindu-Muslim violence that left about 2,000 people dead, most of them Muslims.

In the decades since it was razed, religious groups have fought in the courts over who should control it.

Authorities fear mass unrest, as thousands of Hindu monks and devotees have been arriving in Ayodhya located in Uttar Pradesh state in anticipation of the judgment of a five-judge bench of the Supreme Court, headed by Chief Justice Ranjan Gogoi.

The Supreme Court has to decide on the appeals against a key 2010 verdict by the High Court which ruled that both groups should split the site, with Hindus granted the lion’s share.

The court had ruled that the disputed area of 2.77 acres (1.12 hectares) be divided into three equal parts, with two-thirds going to the Hindu community and one-third to Muslims.

Prime Minister Narendra Modi, whose Hindu nationalist Bharatiya Janata Party (BJP) has campaigned on promises to build a Hindu temple in place of a medieval-era mosque, called for calm.

“Whatever decision the Supreme Court arrives at on Ayodhya, it will not be a victory or defeat of anyone,” Modi tweeted on Friday.

“I appeal to the countrymen that all of us prioritise that this decision should further strengthen India’s great traditions of peace, unity and goodwill.”

“Each and every security officer is committed to prevent minor skirmishes or large-scale riots after the court delivers its verdict,” said a senior home ministry official in New Delhi.

“State governments have identified several schools to set up temporary jails if the need arises,” said the official, who declined to be identified.

Hindu groups say the site should be restored to Hindus in keeping with their sentiments while Muslims and secularists say the destruction of the mosque was a dangerous step towards empowering a violent nationalist mob.

Provincial police chief Om Prakash Singh told Reuters that precautionary measures were in place and social media platforms were being monitored to track inflammatory posts before the verdict.

“We will not tolerate Hindus or Muslims publicly displaying their reaction to the court verdict,” Singh said.

‘No repeat of the 1992 communal violence’

Muslim religious leaders have called for peace and appealed Muslims to respect court judgment in Friday sermons in many parts of the country.

Navaid Hamid, president of the All India Muslim Majlis-e-Mushawarat, the top forum for Islamic organisations, said thousands of Muslim religious leaders had pledged to maintain peace and harmony after the court verdict.

“The land can belong to Hindus or Muslims, but there will be no repeat of the 1992 communal violence,” said Hamid.

Ayodhya – considered one of the holiest Hindu sites – is visited by religious pilgrims from all over India throughout the year.

Around one million pilgrims are expected to be there early next week for a bathing ritual in the Saryu River that flows in the region.

“We just have to stay alert and sensitive to the security of the visiting pilgrims,” Ayodhya district magistrate Anuj Kumar Jha told the AFP.

“We are also keeping a very close watch on the social media to ensure there are no rumours or incitement.”

Authorities clamped down on movement and assembly of people in the region last month when the court was concluding its hearing into the dispute.