JAKARTA, Indonesia — Investigators are examining a potential problem with Boeing’s new 737 Max 8 jet to see whether it could cause the plane to abruptly dive after receiving faulty instrument data, according to an Indonesian official leading an investigation into the crash last week of Lion Air Flight 610.

The official, Haryo Satmiko, the deputy head of the National Transportation Safety Committee, said in an interview on Wednesday that he had held several discussions with Boeing officials about the possibility that inaccurate readings fed into the Max 8’s computerized system would result in the plane’s entering a sudden, automatic descent.

“This case is something for Boeing to reflect upon,” Mr. Haryo said.

In a statement released on Wednesday afternoon, Boeing did not discuss sudden diving as a potential problem with the 737 model, which only entered commercial operations last year and for which more than 4,500 orders have been placed globally.

But the statement said that Boeing had been told by the Indonesian transportation safety committee that Flight 610, which crashed into the Java Sea on Oct. 29, had “experienced erroneous input” from one of its “angle of attack” sensors. Those instruments, on the nose of the plane, gauge the degree of an aircraft’s ascent or descent and help determine whether the plane might be stalling.

The Boeing statement said that the company had issued a bulletin a day earlier to alert airlines to “existing flight crew procedures” for handling false readings from the Max 8’s angle of attack sensors.

Boeing officials in Jakarta, the Indonesian capital, would not give further details when asked for comment on Wednesday.

Angle of attack information is also used on the latest 737 models to help calculate the airspeed of the plane, said Ony Soerjo Wibowo, an air safety investigator for the Indonesian government.

Soerjanto Tjahjono, the head of the national transportation safety committee, said on Wednesday that it was not fair to fault Boeing for a possible systemic problem with the Max 8.

“We cannot yet say that there is a design flaw with the plane,” he said, adding that the plane only developed a problem with the angle of attack sensor after technicians on the Indonesian island of Bali changed it for the jet’s penultimate flight. 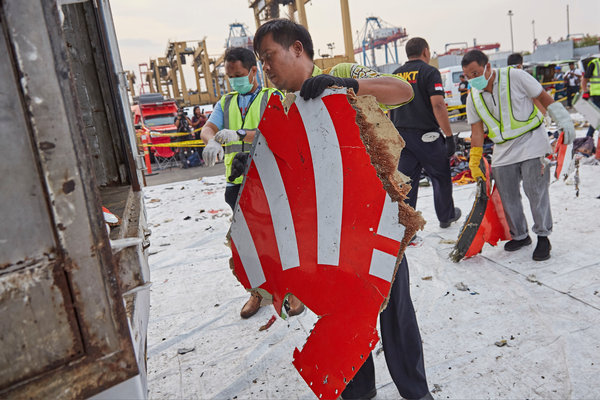 The potential issue with inaccurate angle of attack data adds to problems previously reported with the Lion Air plane, which crashed with 189 people onboard. No survivors have been found.

On Wednesday, Indonesian transport officials confirmed that the flight data recovered from the downed jet last week showed that the plane had experienced problems with its airspeed indicator on its final four flights.

Mr. Ony, the air safety investigator, said that on the plane’s third-to-last flight, from the eastern Indonesian city of Manado to Bali, the plane, which was delivered to Lion Air in August, had recorded no airspeed data at all.

Following Boeing’s troubleshooting manual, technicians in Bali changed the plane’s angle of attack sensors, Mr. Ony said, and the plane was declared fit to fly on to Jakarta.

The plane’s stopover in Bali was relatively brief. Once in the air, the plane again experienced problems with its airspeed indicator, according to Indonesian investigators.

Data from online flight-trafficking services show that the flight experienced a roller-coaster takeoff that would indicate that the airspeed problems occurred early in the flight.

However, the plane did not return to the Bali airport, as some pilots said would be normal procedure for such problems.

Mr. Ony said that part of his investigation centered on why the plane had not been grounded by Lion Air, given that it had experienced multiple airspeed problems.

“This is strange,” he said in an interview on Wednesday. “We found several events that we should investigate but they didn’t report them.”

Lion Air is Indonesia’s largest carrier and one of the world’s fastest-growing low-cost airlines.

Mr. Haryo, the deputy chief of the national transportation safety committee, said that the investigation was focusing on three different components: possible problems with the plane, possible human error by those who operated and maintained the plane, and the overall management of the airline.

Lion Air has had a spotty safety record since it began commercial operations in 2000, racking up at least 15 major safety lapses, including a fatal air crash in 2004.

Incorrect readings from either — or both — the airspeed probes and the angle of attack sensors could cause autopilot systems to disengage and leave pilots confused about what exactly is happening.

Mr. Haryo said he had expected that Boeing would be advising other carriers with Max 8s in their fleets about potential problems both with general airspeed indications and the potential for sudden diving caused by erroneous data. But neither was addressed in Boeing’s statement on Wednesday afternoon.

It is not clear what specifically could have caused the nose-dive problem that Indonesian officials said Boeing had discussed with them. But generally speaking, the faster a plane travels, the more lift it experiences.

To compensate for the lift, a pilot will edge the nose of a plane downward. If incorrect airspeed or angle-of-attack information is being transmitted to computerized systems, then the plane might automatically nose dive, even if automatic piloting systems are disengaged, said Indonesian aviation experts closely following the case.

Flight 610 crashed into the Java Sea, northeast of Jakarta, after less than 15 minutes, following an erratic take off that mirrored the problem experienced on its flight from Bali. The flight crew quickly requested permission to return to the Jakarta airport but never turned around.

The plane slammed into the sea at such high speed that the jet fractured upon impact, in some cases disintegrating into a fine powder, Indonesian investigators said.

“There was no problem with the engine,” Mr. Haryo said, referring to the speed with which the plane entered the water and an initial examination of an engine part that has been retrieved from underwater.

On Tuesday, Indonesian investigators spent hours interviewing technicians who had tried to repair the airspeed indicator problems by installing multiple spare parts and who had cleared the plane for its final flight from Jakarta to the small city of Pangkal Pinang, Mr. Haryo said.

Those interviews, along with conversations with other aviation technicians, have led Indonesian investigators to conclude that the manual Boeing has published on how to deal with a faulty airspeed indicator contains insufficient information, Mr. Haryo said.

“For example, the manual book is lacking in these respects: If this indicator is having a problem, what should be done, how should it be fixed, what should a pilot do?” Mr. Haryo said. “All these are still lacking, so our recommendation is to complete the manual.”

Air crashes are rarely caused by a single factor, aviation experts say. Instead, a combination of external issues, such as bad weather or multiple technical faults, can catalyze pilot confusion and a fatal chain of events.

If there is a problem with the Max 8 that causes the plane to record inaccurate data or to nose dive after processing that faulty information, it would not be the first time that similar problems have manifested themselves after a new model is put into operation.

Airbus, for instance, experienced a problem with the computerized filtering of air data that is believed to have caused a relatively new model of the A330 to dive suddenly. In 2008, Qantas Flight 72, en route from Singapore to Perth, began processing incorrect speed and angle of attack readings. The plane’s autopilot disengaged, but the aircraft abruptly and violently pitched downward, causing serious injuries among the passengers and crew.

Australian transport investigators eventually focused on a software limitation of the A330’s fly-by-wire computer system, which they said caused the accident. Procedures were quickly put in place to avoid similar outcomes.

“It’s really hard to find some faults in testing so it has happened that problems are only discovered after the plane is put into service,” said Gerry Soejatman, an Indonesian aviation expert. “Sometimes weird things happen, and you just can’t anticipate it.”