TOKYO (Reuters) – Japan’s core consumer prices rose in December from a year earlier, data showed on Friday, nudging up from the previous month, but inflation was still well short of the central bank’s elusive 2% target. 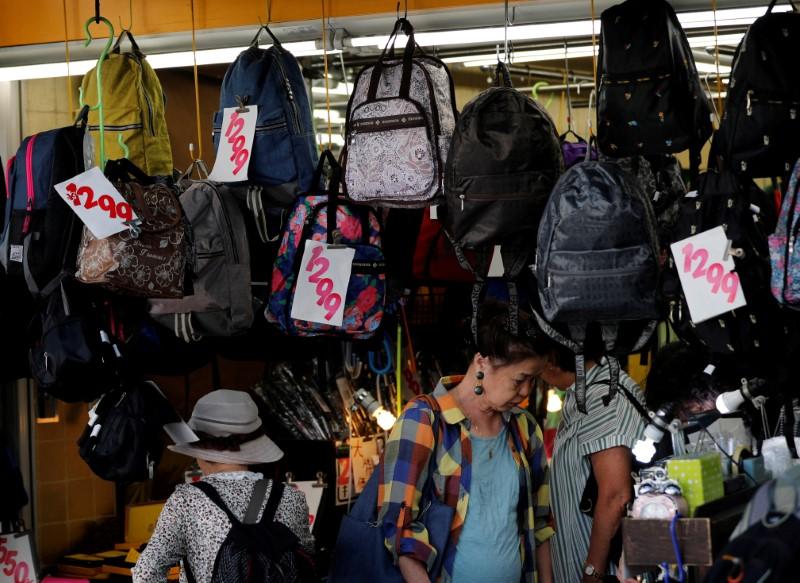 The tame data, which was also boosted by a sales tax increase last October, underscored the challenge faced by the country’s central bank, which was expected to maintain its current stimulus policy, analysts said.

The data release came after the BOJ on Tuesday revised down its consumer price forecasts, despite the central bank having nudged up its economic growth projections.

The BOJ kept its policy unchanged this week and Governor Haruhiko Kuroda reiterated the central bank’s resolve to maintain its ultra-easy policy in light of soft inflation and lingering uncertainty abroad.

“Factors such as a labor shortage and a sales tax hike have helped corporations to raise prices … but we expect consumer inflation will hover sideways on sluggish wage recovery,” said Hiroaki Mutou, chief economist at Tokai Tokyo Research Institute.

“The BOJ has downgraded its consumer prices inflation projections but they are still rosy numbers. We expect the central bank will keep its current pace of stimulus policy.”

The so-called core-core inflation index, which excludes fresh food and energy prices and is similar to the core index used in the United States, grew 0.9% in December from a year earlier, the fastest pace of growth since March 2016.

A pickup in the core-core CPI, closely watched by the BOJ as a key measurement on the broad inflation trend, reflected price rises including for sweets, some prepared foods and restaurant meals, an official said.

Without the impact of a sales tax hike to 10% from 8% in October, core CPI index rose only 0.4% in December from a year earlier and the core-core inflation index grew 0.6%, the data showed.

“Consumer spending is expected to pick up after the sales tax hike dented it but the spending will unlikely be strong enough to boost consumer prices,” said Takeshi Minami, chief economist at Norinchukin Research Institute.

The nation’s economy expanded at an annualized 1.8% in the third quarter thanks to resilient domestic demand and business spending.

But exports fell for a 13th straight month in December, hurt by U.S.-bound shipments of cars, construction and mining machinery, suggesting weak external demand is likely to remain a drag on the trade-reliant economy for a while longer.

The central bank could consider later this year watering down its commitment to keep or cut its rock-bottom interest rates, if pessimism over the global outlook continues to recede, sources say.