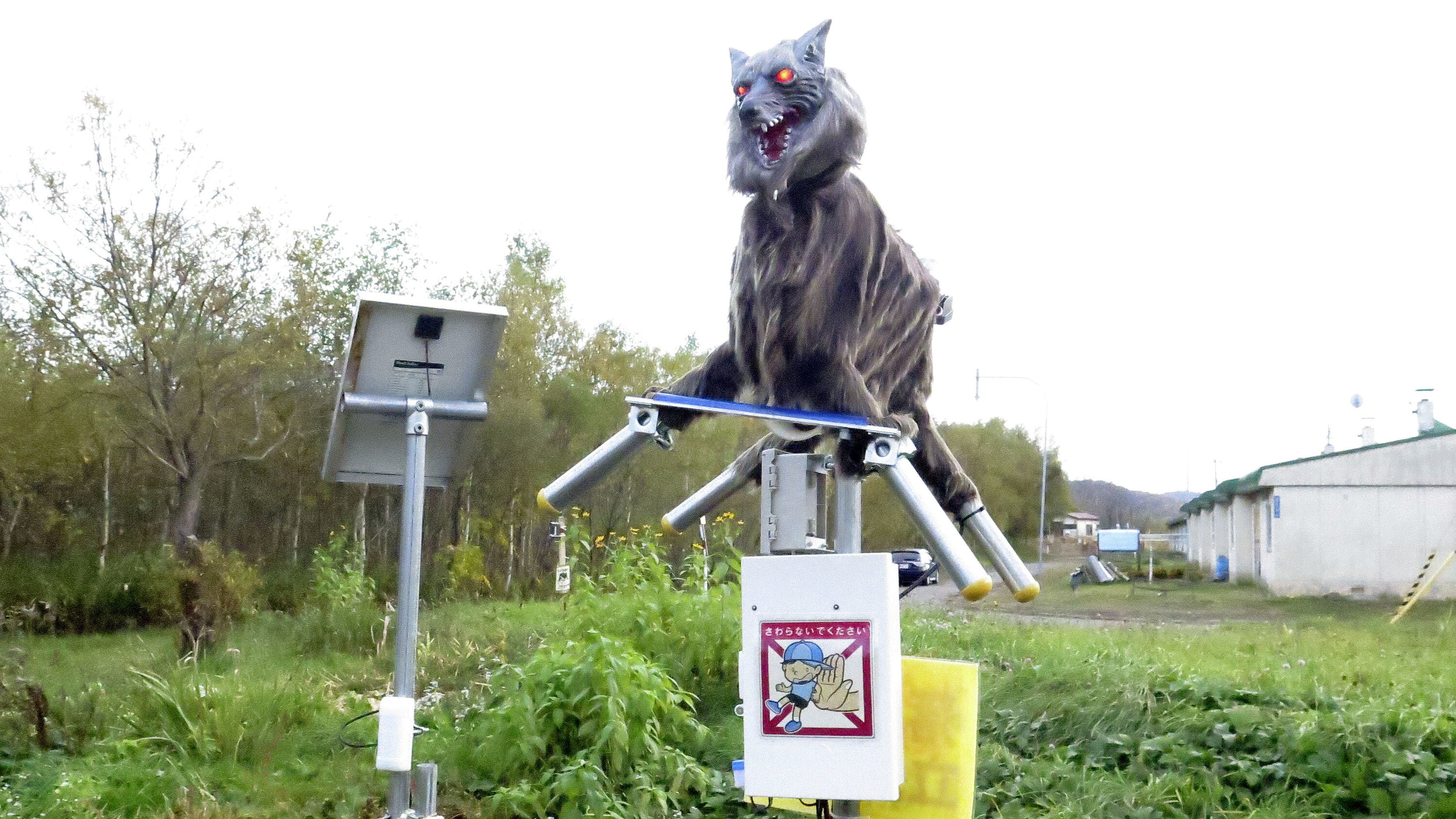 The wild bears were becoming more than a nuisance, lumbering into a small Japanese city on the northern island of Hokkaido in search of food and increasing the risk of deadly encounters with humans.

As bear sightings, and the danger, increased, officials in the city of Takikawa, population 40,000, turned to a mechanical solution.

In September and October, officials installed a “Monster Wolf” near a residential neighborhood and another in a field in a suburban area to keep the wild bears at bay.

The mechanical wolf, originally developed by the machinery maker Ohta Seiki, stands 2.6 feet tall and is four feet long, its maker said. But when planted high in a field, it appears more than a match for a wild bear.

With fake fur, bared fangs and flashing red eyes, the wolf turns its head from side to side and makes howling, screeching sounds when its motion detectors are triggered. The screech can travel about a kilometer, and it comes in more than 60 varieties, including a dog’s bark, a hunter’s voice and gunshots.

That way, bears wouldn’t get used to the sound, according to Shuji Sasaki, director of Wolf Kamuy, the company in charge of the mechanical wolf’s sales and maintenance.

Takikawa’s gambit seems to have been a roaring success, Hiroki Kondo, a city official, said. No more sightings of rummaging bears have been reported since the robo-wolves showed up.

Bear sightings in the wild have reached a five-year high across Japan in recent months, according to official figures. Since April, 13,670 reports were filed. A number of attacks this year have left residents injured or killed, and bears have been shot dead. The recent attacks, including two fatal ones, led to an emergency government meeting last month to tackle the threat, according to local media reports.

Brown bears had been rarely seen in Takikawa — about one every few years — but residents have reported about 10 sightings in the city this year, Mr. Kondo said. On Sept. 14, some residents told city officials they could “see a bear from the window” of their home. Three days before, the city government had received reports of a bear cub in the same area, according to local reports. That led to the deployment of the mechanical wolves.

A shortage of acorns and shrinking rural populations — which serve as a buffer between the wilderness and the more populated urban areas — are among the factors pushing the wild bears into other areas in search of food ahead of their hibernation.

Yuji Ota, the chief executive of Ohta Seiki, told Japan’s public broadcaster NHK last month that the robo-wolf could help humans and bears “coexist,” chasing the animals back into the mountains.

“We want to let the bears know, ‘Human settlements aren’t where you live,’” he also told The Mainichi newspaper.

The Monster Wolf was originally rolled out in 2016 to protect farmlands and crops. Since then, deer, bears and monkeys have been filmed leaping away as the mechanical contraption howls. About 70 wolves are in use across the country, from Hokkaido to the southernmost prefecture of Okinawa, where they protect pineapple farms from wild animals.

As for real wolves, they are believed to have been extinct in Japan for more than a century.

Pope Francis’ doctor dies from COVID-19 ‘complications’ Francis was forced to cancel three events at short notice over the weekend, after his ongoing issues with…