SEOUL, South Korea — North Korea’s leader, Kim Jong-un, engineered one of his country’s largest leadership shake-ups in memory this week, bringing new blood into his economic and diplomatic teams while vowing to resist American-led sanctions by building a self-sufficient economy.

At meetings of the North’s rubber-stamp legislature and its ruling Workers’ Party, Mr. Kim — now considered “the supreme representative of all the Korean people,” according to state media — reasserted his leadership and finessed his foreign policy team after the breakdown of his summit meeting with President Trump in Hanoi, Vietnam, in late February.

The Hanoi talks ended abruptly, forcing Mr. Kim to return home without relief from damaging international sanctions over his nuclear weapons program. He had asked Mr. Trump to drop the most crippling sanctions in return for a partial dismantlement of his nuclear program, but Mr. Trump considered that offer insufficient.

Reports from the North about this week’s meetings in Pyongyang, the capital, made no mention of Mr. Kim threatening to resume nuclear and missile tests, or criticizing Mr. Trump directly — a sign that he wants to keep diplomacy alive.

But he also offered no compromises to Washington and said the North would endure the pain of sanctions. In recent weeks, the North’s state media has sworn that its people would “live on water and air only” or even starve to death rather than buckle under American pressure.

American officials say the United Nations sanctions provide them with their strongest leverage against the North, targeting all of its main exports, such as coal, fisheries and textiles, as well as imports of badly needed fuel. Mr. Trump said on Thursday, when he met with President Moon Jae-in of South Korea in Washington, that it was important to continue talks with North Korea, but he also reaffirmed that he would not lift sanctions until the North denuclearized.

Mr. Kim’s leadership shuffle this week seemed to signal that he was digging in for protracted negotiations, as he replaced aging senior officials with younger, more aggressive ones and vowed repeatedly to overcome the sanctions. 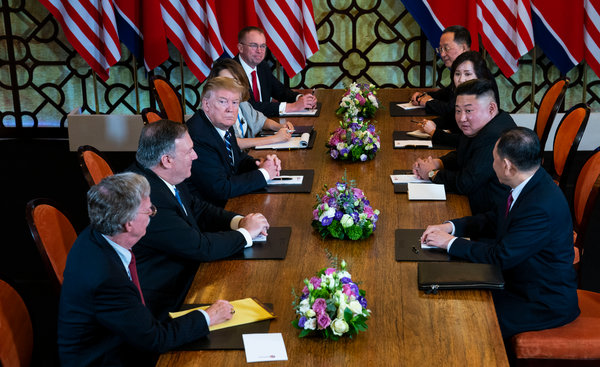 At a meeting of the Central Committee of the Workers’ Party on Wednesday, Mr. Kim urged his people to build a “self-supporting national economy” so as to “deal a telling blow to the hostile forces who go with bloodshot eyes miscalculating that sanctions can bring the D.P.R.K. to its knees,” the North’s official Korean Central News Agency said on Thursday, using the abbreviation for the country’s official name, the Democratic People’s Republic of Korea.

Mr. Kim referred to a “self-supporting,” “self-reliant” or “self-sufficient” economy 25 times, calling it “the eternal lifeline essential to the destiny of our revolution.”

In North Korea, all power is concentrated in Mr. Kim, who has frequently shuffled leadership posts to test the elites’ loyalty and promote his policy goals. Mr. Kim holds several titles, but he has ruled mainly as chairman of the State Affairs Commission, the closest thing the North has to a White House.

This week, he further consolidated the commission’s role in the power structure, apparently preparing for harsh economic times and uncertain diplomatic negotiations with the United States.

Mr. Choe’s family has been loyal to Mr. Kim’s since the days of Mr. Kim’s late grandfather, the North Korean founder Kim Il-sung. This week, Mr. Choe, 69, also replaced 91-year-old Kim Yong-nam as president of the Presidium of the Supreme People’s Assembly, a role that has been equivalent to ceremonial head of state.

But North Korean media reports on Friday referred to the State Affairs Commission chairman — Mr. Kim — as “the supreme representative of all the Korean people,” which led some South Korean analysts to speculate that Mr. Kim had made himself the North’s formal head of state.

Mr. Kim also replaced his country’s premier, who oversees the economy. The outgoing premier, Pak Pong-ju, 80, has been an instrumental figure in the North’s experiment with market-oriented reforms. He has helped to give state enterprises more autonomy and introduce hundreds of unofficial markets to supplement the North’s moribund state ration system.

To replace him as premier, Mr. Kim chose Kim Jae-ryong, who has built his credentials as party boss of Jagang Province, which is home to many of the North’s munitions factories. The new premier is believed to be in his 60s.

Another notable figure in this week’s leadership shuffle was Choe Son-hui, a vice foreign minister, who became the newest member of the State Affairs Commission.

Ms. Choe, believed to be in her mid-50s, has been a fixture in the North’s negotiations with Washington over the past couple of decades, which have been plagued by mutual recriminations and broken promises.

Last May, she called Vice President Mike Pence, a hawk on North Korea, a “political dummy.” That prompted Mr. Trump to briefly cancel his first meeting with Mr. Kim, which eventually took place in Singapore in June. Ms. Choe was later eclipsed by Kim Yong-chol, a former spy chief and State Affairs Commission member who served as Mr. Kim’s point man on Washington.

But Kim Yong-chol’s fate has been the subject of much speculation since the Hanoi summit meeting failed, and Ms. Choe’s status has since risen. She has become the North’s main spokeswoman, accusing Washington of “gangster-like” demands and warning that Mr. Kim might no longer be interested in talking to Mr. Trump unless the United States backed down on sanctions.

Ms. Choe’s elevation to the State Affairs Commission could indicate that Mr. Kim plans to engage in tougher and protracted negotiations with Washington to win sanctions relief, said Cheong Seong-chang, a senior analyst at the Sejong Institute in South Korea. Under Mr. Kim, the State Affairs Commission has replaced the Foreign Ministry as the center of negotiations with Washington.

“The latest leadership reshuffle is seen as strengthening the North’s diplomatic lineup and the role of the State Affairs Commission,” Mr. Cheong said.