When Kim Jong-un, the North Korean leader, visits Vietnam for the first time this week, his main mission will be meeting with President Trump to discuss a range of thorny diplomatic issues, including the denuclearization of the Korean Peninsula.

But however the summit meeting turns out, Mr. Kim’s trip to Vietnam will be symbolic in other ways. That is partly because Vietnam and North Korea have a long friendship that includes cooperation during the Vietnam War, as well as complex relationships with China, their mutual neighbor.

South Korea and the United States also see Vietnam’s postwar reconciliation with old enemies — and its booming economic growth of the last few decades — as a potential model for Mr. Kim’s government to follow. His movements and comments in Vietnam may offer a glimpse of whether he agrees.

Here’s a rundown of where Mr. Kim may go in Vietnam, and the political and historical symbolism that would lie just below the surface.

Mr. Kim is traveling from North Korea to the Vietnamese border via China in a famously slow, bulletproof train. The train is likely to arrive in Dong Dang, one of the places Chinese troops crossed into Vietnam in 1979, setting off a brief but bloody border war.

That war came during a strained period in Vietnamese-North Korean relations.

Pyongyang recognized Vietnam’s nascent Communist regime in 1950, four years before the country gained independence from France. It would later join China in providing material and personnel to North Vietnam for its war against the United States.

But Vietnam’s 1978 invasion of Cambodia prompted North Korea, an ally of the Khmer Rouge, to provide sanctuary to Prince Norodom Sihanouk of Cambodia. The prince later spent years splitting his time between villas in Beijing and Pyongyang.

Relations between Vietnam and China, meanwhile, were not restored until 1991. 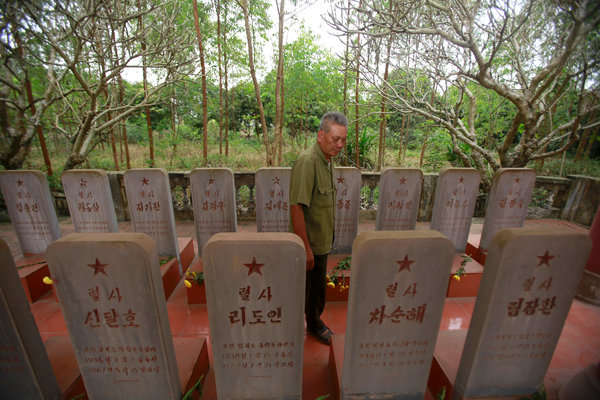 From the border, Mr. Kim is expected to travel, perhaps in his armored Mercedes-Benz limousine, through several northern Vietnamese provinces. One would be Bac Giang, where hundreds of North Korean Air Force personnel were deployed during the Vietnam War — a symbol of trust and cooperation between the two countries.

Like Russian military officers who were sent to support Communist forces against the American-backed South Vietnamese regime, North Korean pilots wore Vietnamese uniforms and used their hosts’ aircraft, facilities and equipment. Their remains were repatriated from Vietnam to North Korea in 2002, but their graves still stand in a Bac Giang rice paddy.

“When they died, Vietnamese people treated them the same as Vietnamese martyrs who sacrificed for the country,” Duong Van Dau, the memorial’s caretaker, recently told The Associated Press.

The factory is a potent symbol of how foreign investment has helped transform Vietnam’s economy since the late 1980s, when the ruling Communist Party — unlike North Korea’s leadership — embarked on a campaign of so-called Open Door economic reforms.

In Hanoi, the Vietnamese capital, Mr. Kim is expected to meet with Mr. Trump on Wednesday and Thursday at one of two downtown venues.

One is the Government Guest House, the former residence of the colonial governor of Tonkin, the name for northern Vietnam during the French colonial period. The building became the headquarters of a transitional government led by the Communist revolutionary Ho Chi Minh, who declared Vietnam’s independence from France in 1945.

Another option is said to be the colonial-era Sofitel Legend Metropole Hanoi, where Senator John McCain of Arizona liked to stay and chat with reporters on his trips to Vietnam. (That is not to be confused with the “Hanoi Hilton,” the darkly comic nickname for the Hanoi prison where Mr. McCain was once held as a prisoner of war.)

One of the Metropole’s other famous guests was the American folk singer Joan Baez, who sheltered in the hotel’s underground bunker during the December 1972 bombing of Hanoi. The bunker’s exact location remained a mystery for years after the war — until 2011, when it was discovered by workers who were building a poolside bar.

The rest of Mr. Kim’s Hanoi itinerary is still shrouded in secrecy. But one logical stop would be the Ho Chi Minh Mausoleum, a few blocks from the North Korean Embassy.

Ho is one of several Communist leaders to be embalmed in recent decades; others include Mr. Kim’s father and grandfather, Kim Jong-il and Kim Il-sung. The North Korean foreign minister, Ri Yong-ho, attended a wreath-laying ceremony at the mausoleum when he visited Hanoi in December.

And what about dinner? If Mr. Kim’s diplomatic entourage chooses to dine out, they might consider Pyongyang, one of several state-run North Korean restaurants worldwide, located in Hanoi. The restaurants have traditionally helped to raise hard currency for the regime. But critics say they are sites for money laundering, and waitresses occasionally defect.

Down by the bay?

When a senior North Korean official known as Mr. Kim’s “butler” traveled to Vietnam last week, he stopped in Halong Bay, a popular tourist destination near the northern port city of Haiphong.

If Mr. Kim also makes the journey to Halong Bay, he would follow in the footsteps of his grandfather, who traveled there in 1964. The younger Kim, who has reportedly taken a great interest in North Korea’s tourism industry, may see Halong Bay as a useful model for how to develop a big-name tourist attraction.

The factories of nearby Haiphong, meanwhile, which manufacture products for companies like LG Electronics of South Korea, could be a lesson for Mr. Kim in how to attract foreign investment.