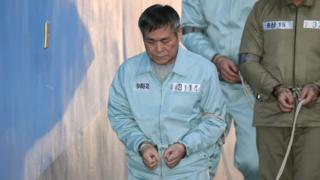 A South Korean pastor has been sentenced to 15 years in jail for raping eight female followers of his mega-church.

Lee Jae-rock, 75, has about 130,000 followers at the Mamin Central Church in Seoul. He denied all the charges.

His victims had spoken of his “divine power” and said they felt compelled to do what he asked because “he was God”.

Most South Korean Christians belong to mainstream churches which can accumulate huge wealth and influence.

But there are a small amount of fringe groups that engage in behaviour more associated with cults including coercion, brainwashing and fraud.

Lee’s church is regarded as a splinter cult by some mainstream Christian organisations.

Lee set up the Mamin Central Church in 1982 with only 12 followers. It has now grown to what is known as a mega-church, with its huge headquarters and auditorium and a website with promises of miracles.

Earlier this year, three of his followers came forward to say he had called them to his apartment and forced them to have sex.

“I was unable to turn him down,” one of them told South Korean media at the time.

“He was more than a king. He was God,” added the woman, who said she had been a member of the church since she was a child.

In total, eight women filed criminal complaints and he was arrested in May.

The court found Lee molested and raped the victims “tens of times” over a long period.

“Through his sermons the accused has indirectly or directly suggested he is the holy spirit, deifying himself,” judge Chung Moon-sung told the Seoul Central District Court.

The victims believed him to be “a divine being who wields divine power”, he said.

Lee stood with his eyes closed as the judgement was read out.

His defence had alleged the women were lying for revenge after they were excommunicated for breaking the rules of the church.