SINGAPORE – More rain could fall in Singapore in the next few months and into the new year.

Multiple weather agencies, including the Meteorological Service Singapore (MSS) under the National Environment Agency and the United States National Oceanic and Atmospheric Administration, have declared that La Niña conditions are present.

“Most models are predicting the La Niña conditions to persist until early 2022,” said the MSS on its website.

This year’s La Niña event is the second to have developed in the tropical Pacific Ocean in the past two years.

La Niña conditions were also detected in the region in the third quarter of last year. That event tapered off around the second quarter of this year.

The MSS said La Niña events typically have the largest effect on Singapore’s rainfall between June and October.

“Singapore’s island-wide total rainfall between June and September last year was around 40 per cent above the long-term average, and the La Niña that developed in the third quarter of 2020 would have contributed to this,” said the MSS spokesman.

Average rainfall between March and May this year was also 35 per cent higher, the spokesman added.

She said that the La Niña that developed in recent months is predicted to be weaker compared to the last event.

La Niña and El Niño are opposite phases of a climate phenomenon known as the El Niño Southern Oscillation.

Both phenomena are caused by changes in atmospheric pressure and sea surface temperatures in the tropical Pacific Ocean, and have opposite effects on the weather over the maritime continent, which includes Singapore and Indonesia.

Under normal conditions, the western Pacific – where countries like Singapore and Indonesia are situated – is much warmer than the eastern side of the ocean.

The reason lies in the way the winds blow. 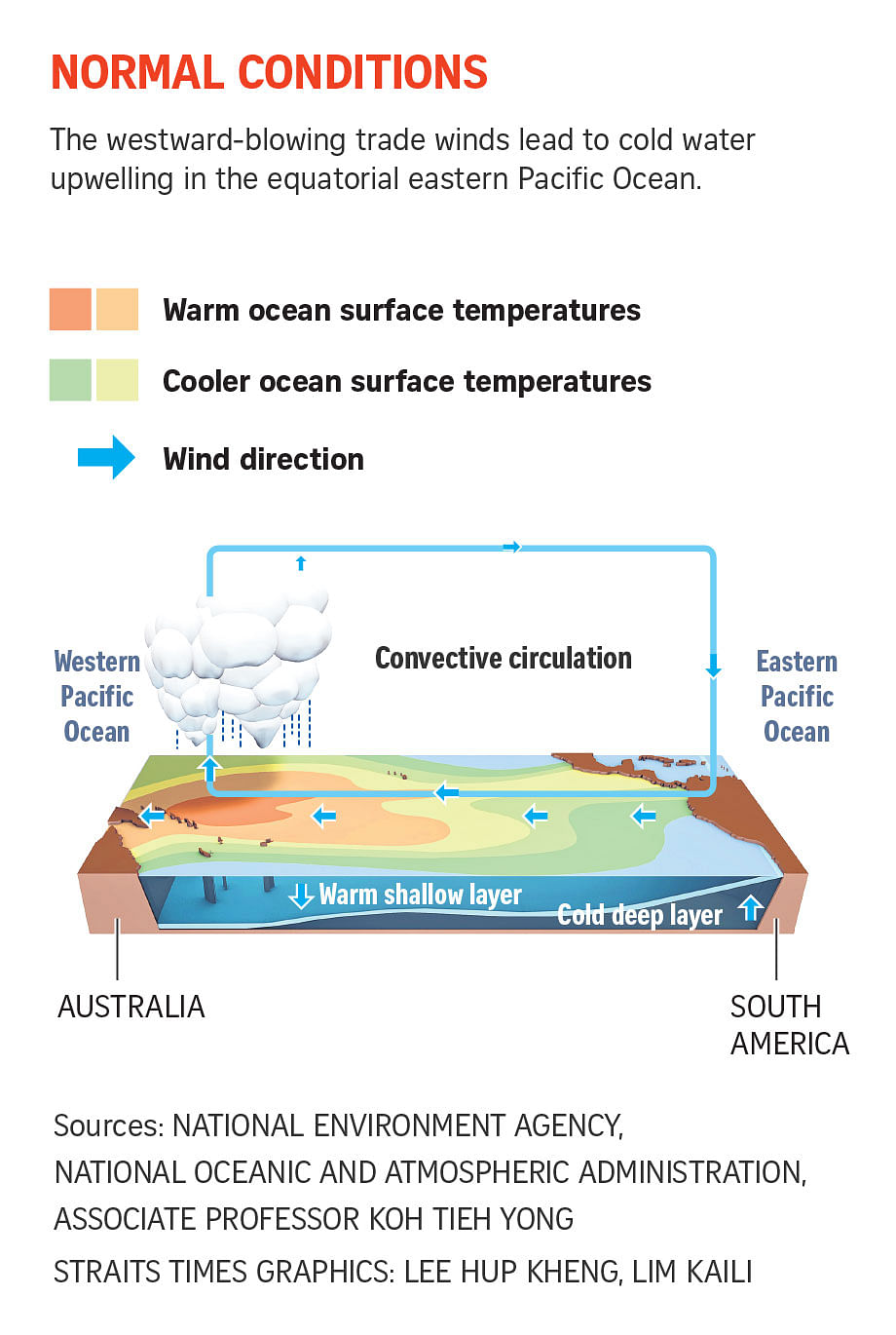 In the tropical Pacific Ocean, winds mainly blow from east to west.

These predictable trade winds, as they are known, keep warm water confined around the maritime continent.

But during an El Niño event, the trade winds weaken. This means the pool of warm water is no longer confined to the region. 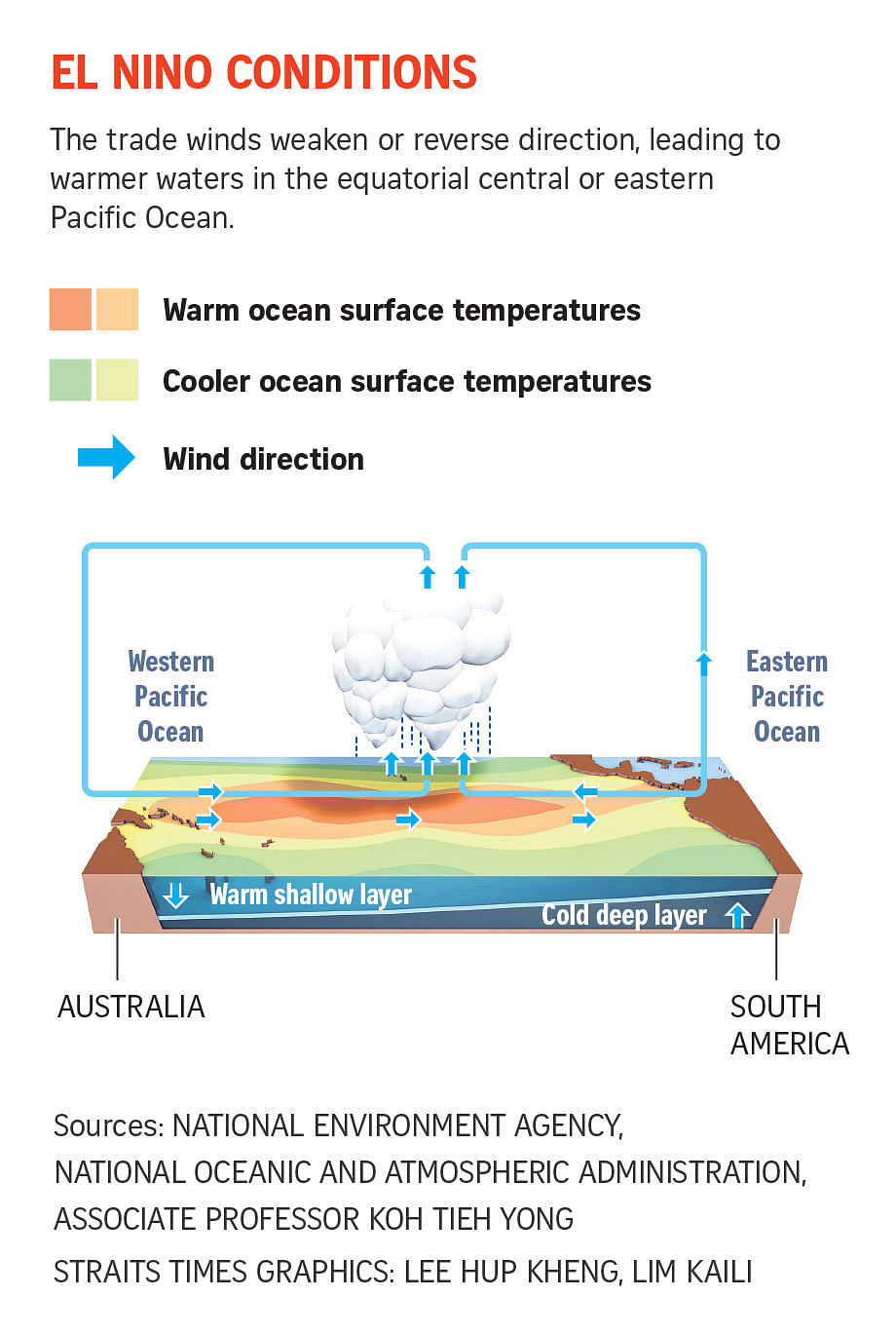 As the warm water moves towards the central Pacific Ocean, rain clouds follow.

This is why during an El Niño event, South-east Asia experiences less rain and hotter weather.

But during a La Niña event, the opposite happens.

The trade winds intensify, causing warm water to be more tightly confined around the maritime continent. This concentrates the moisture supply which fuels the formation of rain clouds that bring more rain.

Associate Professor Koh Tieh Yong, a weather and climate scientist at the School of Science and Technology, Singapore University of Social Sciences, said the strength of a La Niña event depends on how much sea surface temperatures have cooled in the central tropical Pacific Ocean.

This temperature difference sets up a higher air pressure than normal in the central tropical Pacific Ocean, which in turn drives stronger easterly winds to the western Pacific. 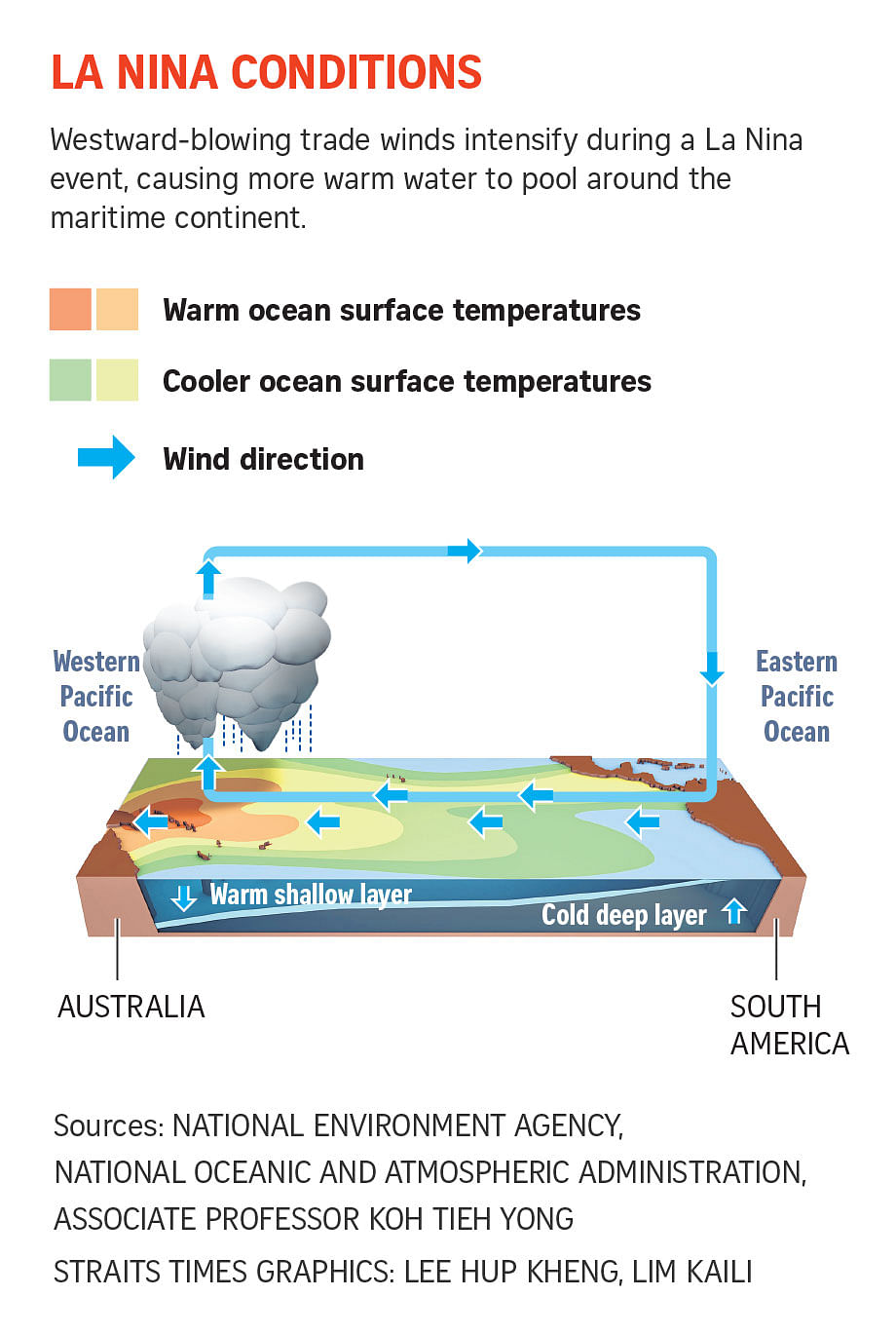 Find out more about climate change and how it could affect you on the ST microsite here.