Ex-prime minister found guilty of corruption in landmark verdict, but remains free pending the outcome of an appeal. 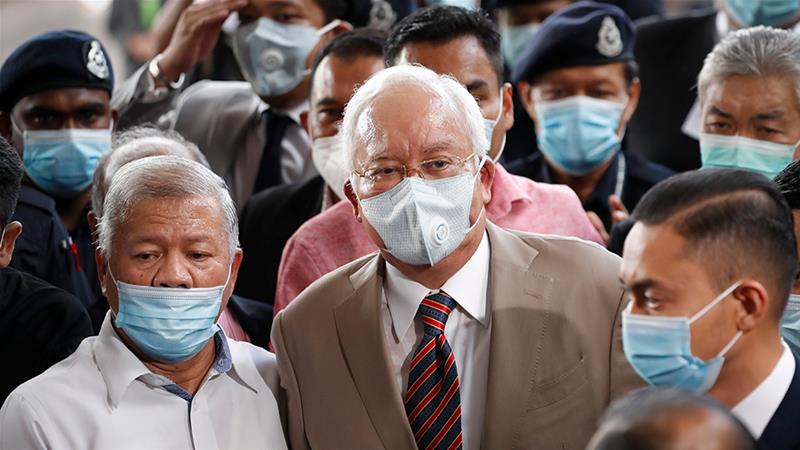 Kuala Lumpur, Malaysia – Former Malaysian Prime Minister Najib Razak has been sentenced to serve 12 years in jail after a court in Kuala Lumpur found him guilty of corruption in the first of several cases linked to the alleged theft of billions of dollars from the state fund, 1MDB.

Tuesday’s ruling makes Najib the first Malaysian leader to be convicted of corruption.

But the 67-year-old remains free as Judge Mohamad Nazlan Ghazali granted a stay order on the execution of Najib’s sentence, pending an appeal.

“Surely, I am not satisfied with the result,” Najib told reporters as he exited Kuala Lumpur’s High Court.

“But within our system, the high court is the first court and the decision was only made by one judge. We have the benefit of an appeal,” he added, vowing to “continue the effort to clear my name”.

The guilty verdict against Najib relates to his role in diverting an estimated 42 million ringgit ($9.87m) from SRC International, a unit of 1MDB, into his personal bank accounts. The judge had found the former prime minister guilty on all seven charges filed against him.

“I find that the prosecution has successfully proven its case beyond a reasonable doubt. I therefore find the accused guilty and convict the accused on all seven charges,” Mohamad said.

But the judge also ordered the sentences to run concurrently, meaning Najib will serve 12 years in prison.

The conviction comes just six days after the high court ordered Najib to pay the government as much as 1.69 billion ringgit ($400m) in unpaid taxes and penalties, covering the years from 2011 to 2017.

Prior to the sentencing, Datuk V Sithambaram, the lead prosecutor in the case, had called for a ruling that serves “as a precedent for all in public office that no one is above the law”.

Najib then took the dock to defend himself, insisting that he was not aware of the SRC payment into his bank accounts. “I did not demand the 42 million nor was it offered to me. There is no witness who can say so,” he said.

Several of his supporters gathered outside Kuala Lumpur’s High Court openly cried when news of the convictions came, while others shouted, “Long live my boss.” Some also condemned the judge’s verdict as “political vengeance”.

The crowd outside Kuala Lumpur’s High Court following the arrival of #Malaysia ex-PM Najib ahead of his graft verdict on Tuesday. pic.twitter.com/njmnZa7kV4

When Najib exited the court building, many cheered and called out his name.

So far, Najib has faced three separate trials in relation to 1MDB.

The United States Department of Justice alleges $4.5bn in government money had been drained from 1MDB during Najib’s time as prime minister.

Prosecutors say Najib played a direct role and gave instructions to deposit money into his bank accounts, which was later used for political funding, the purchase of luxury goods and renovations on his property.

The former prime minister’s lead defence lawyer, Muhammad Shafee Abdullah, had argued that Najib was “not part of the conspiracy” to the defraud the government, laying the blame on party-loving fugitive Malaysian financier Jho Low.

The second case against Najib covers several charges, including 21 counts of money laundering involving $550m directly from 1MDB, while the third case, which started on November 18, relates to the alleged abuse of power and cover-up of an audit report at 1MDB.

The scandal at 1MDB fuelled mass protests and led to the downfall of Najib’s government in May 2018.

Najib has remained free on bail despite the charges against him, criticising the policies of his former mentor, Mahathir Mohamad and the coalition that replaced him.

Mahathir himself was forced to leave the job in March this year, after a group of disgruntled former members of his coalition, backed by Najib’s party, UMNO, pledged their support to the current Prime Minister Muhyiddin Yassin.