SINGAPORE – What will happen to the migrant worker community here after the Covid-19 pandemic blows over?

That was the overriding concern that the families of the late Khoo Teck Puat and Ng Teng Fong had when they approached the Singapore Business Federation (SBF) Foundation early last year, with cash in hand and a desire to do more for these workers.

On Monday (Nov 29), the estates of the two businessmen signed a memorandum of understanding with the SBF Foundation, Ministry of Manpower and St Andrew’s Mission Hospital (SAMH) on initiatives that will address gaps in the care that is given to migrant workers here.

A $20 million donation from the families will help fund a new medical centre in Penjuru that is slated to open early next year.

The money will also go to a new charity, MigrantWell Singapore, which aims to support the well-being and health of migrant workers, as well as a welfare fund that will support it.

The charity will partner community agencies to identify care gaps, such as in dental and mental health, and develop guidelines on how the welfare fund will be used.

Meanwhile, the SBF Foundation aims to raise another $15 million from its members to add to the welfare fund.

“Sometimes it takes a crisis for you to see some gaps more evidently… and stir the heartstrings.”

She said SBF Foundation had consulted other non-governmental organisations (NGOs), such as HealthServe, and the new charity is open to collaborating with them.

“We will want to fund what helps the migrant workers,” added Ms Ang, who is a Nominated MP.

SAMH group chief executive Arthur Chern said the hospital was approached to run the medical centre in Penjuru by the donors as it had experience working with migrant workers.

Since August, SAMH has been running a temporary medical centre in Penjuru with a team of 14 healthcare workers.

Before the pandemic, St Andrew’s Community Hospital, which is under SAMH, had operated a free mobile clinic at dormitories from 2012.

Eventually, the new centre will be supported by volunteers from philanthropic organisations, tertiary healthcare institutions and the general public, Dr Chern said.

At the signing ceremony, SBF Foundation chairman Hsieh Fu Hua highlighted issues faced by workers, such as a lack of affordable healthcare, limited support from employers, anxiety over losing their jobs, and poor health awareness.

“Despite the good support by the Government and multiple initiatives by NGOs so far, there is still more to do,” he said. 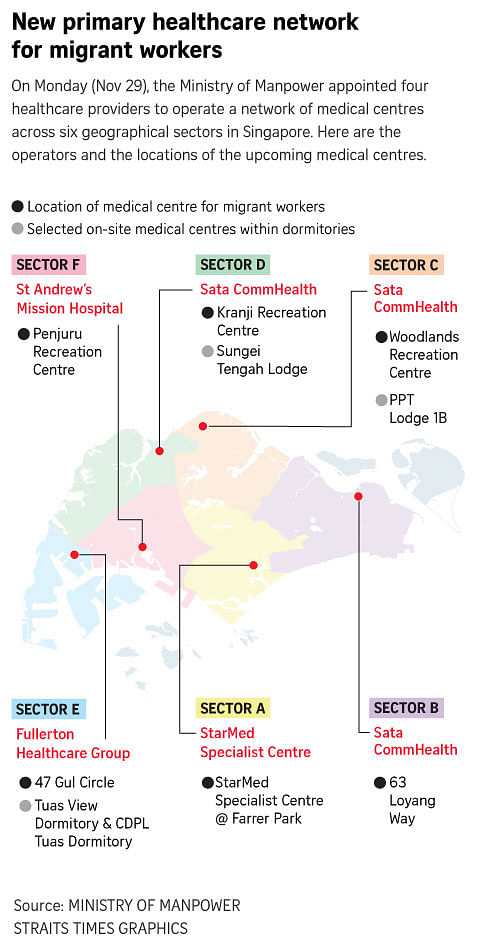