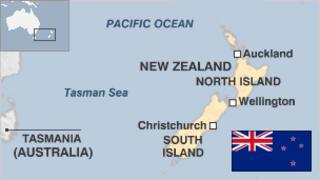 New Zealand is a wealthy Pacific nation dominated by two cultural groups – New Zealanders of European descent, and the Maori, who are descendants of Polynesian settlers.

It is made up of two main islands and numerous smaller ones. Around three-quarters of the population lives on the North Island, which is also home to the capital, Wellington.

Agriculture is the economic mainstay, but manufacturing and tourism are important. Visitors are drawn to the glacier-carved mountains, lakes, beaches and thermal springs. Because of the islands’ geographical isolation, much of the flora and fauna is unique to the country.

New Zealand plays an active role in Pacific affairs, and has special constitutional ties with the Pacific territories of Niue, the Cook Islands and Tokelau.

Head of state: Queen Elizabeth II, represented by a governor-general

Jacinda Ardern was sworn in as prime minister in October 2017, pledging to lead a government for all despite her Labour Party falling well short of a majority in the previous month’s general election.

She stitched together a three-way coalition. Her centre-left party trailed the previously ruling conservative National Party on election night, and required the combined support of the populist New Zealand First party and the Greens to confirm a majority government.

Ms Ardern campaigned on social issues including housing affordability and improved healthcare, and also listed raising the minimum wage, environmental issues, and tackling homelessness and child poverty among her priorities.

In 2018 Ms Ardern gave birth to her first child, making her only the second elected leader in modern history to give birth while in office. Benazir Bhutto gave birth to a daughter while serving as Pakistan’s prime minister in 1990.

Broadcasters enjoy one of the world’s most liberal media arenas.

The broadcasting sector was deregulated in 1988, when the government allowed competition to the state-owned Television New Zealand (TVNZ). Privately-owned TV3 is TVNZ’s main competitor.

The New Zealand Herald newspaper has the biggest circulation.

c. 1200-1300 AD – Ancestors of the Maori arrive by canoe from other parts of Polynesia. Their name for the country is Aotearoa (land of the long white cloud).

1642 – Dutch explorer Abel Tasman sights the south island and charts some of the country’s west coast. It subsequently appears on Dutch maps as Nieuw Zeeland, named after the Dutch province of Zeeland.