SEOUL, South Korea — North Korea displayed what appeared to be its largest ever intercontinental ballistic missile during a nighttime military parade in Pyongyang on Saturday, as its leader, Kim Jong-un, vowed to strengthen the country’s nuclear deterrent amid stalled diplomacy with President Trump.

The new ICBM appeared to be much larger than North Korea’s largest, previously disclosed long-range missile, the Hwasong-15. The size of the new missile indicated that it might be able to fly farther and carry a more powerful nuclear warhead, analysts said, although it has never been flight-tested.

Its display also provided Washington and its allies with what appeared to be the clearest indication yet that North Korea has been advancing its missile and nuclear technologies despite Mr. Trump’s on-again, off-again diplomacy with Mr. Kim.

When North Korea test-launched the Hwasong-15 in late 2017, it claimed the missile could reach any part of the continental United States carrying a nuclear warhead. Although North Korea has conducted three ICBM tests, all in 2017, it remained unclear whether the country had the technology needed to protect a nuclear warhead during atmospheric re-entry, and deliver the weapon to its target.

“We will continue to strengthen the war deterrent, the righteous self-defense means,” against nuclear and other threats from “hostile forces,” Mr. Kim said during a speech at the military parade, without citing the United States by name. Mr. Kim said his country has expanded its military force “at a speed and in a quantity and quality we have wanted.”

North Korea had been preparing for months for the military parade on Saturday, the 75th anniversary of its ruling Workers’ Party. The “special” celebration Mr. Kim had promised turned out to be a rare nighttime military parade in a plaza in Pyongyang named after his grandfather and North Korea’s founder, Kim Il-sung. 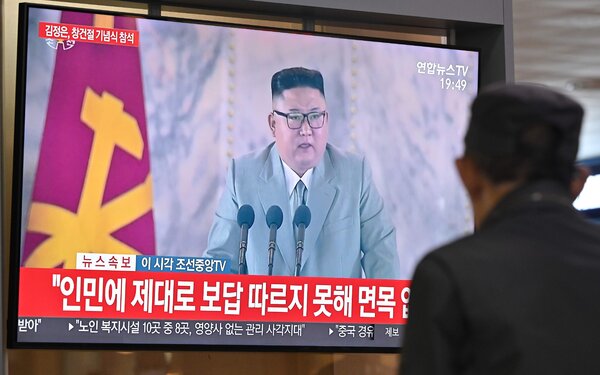 The parade featured fireworks and military planes firing flares in the night sky while columns of goose-stepping soldiers marched down the plaza, swearing to “defend Kim Jong-un with our lives.” But the real highlight was an impressive array of artillery pieces, tanks, rockets and missiles.

Analysts noted Mr. Kim’s political calculations in deciding how to celebrate the party anniversary, an important national holiday, which comes just weeks before the November election in the United States. By displaying a new and apparently more powerful ICBM, Mr. Kim demonstrated the North’s growing military threat to whoever wins the election.

But he also was hedging his bets over what both he and Mr. Trump have called their special “personal relationship” — at one point, Mr. Trump said he “fell in love” with the North Korean dictator. Mr. Kim declared a halt to all nuclear and ICBM tests ahead of his first summit meeting with Mr. Trump, in Singapore in June 2018. Mr. Trump has called the moratorium one of his biggest foreign policy achievements, insisting that his diplomacy has reduced the risk of war with the North.

By showing off — but not going so far as launching — a new ICBM for the party anniversary, analysts said Mr. Kim appeared to want to avoid provoking Mr. Trump unnecessarily ahead of the American election. But the display indicated that he had the ability to test-launch the missile if he decided to try to boost his leverage in future talks with whoever wins the election.