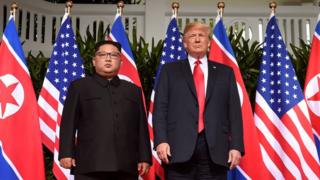 Instead, the US and North Korea appear to be staring one another down, waiting for the other to blink or make a move. And neither appears willing to give way.

Discussions aimed at setting up a second summit between the two leaders didn’t happen as planned this week.

Chairman Kim’s aide, the hardliner Kim Yong-chol was supposed to travel to New York and meet US Secretary of State Mike Pompeo.

But the BBC understands that the meeting was cancelled after the State Department discovered that the North Koreans didn’t get on the plane as planned.

The official line is that the meeting will be rescheduled and Mr Trump said he’s “very happy” with how things are going, and that he’s in “no rush” while sanctions remain in place.

In Seoul, too, they are urging reporters not to read too much into the missed meeting – there have been missed meetings in the past, they say.

Although officials from the Foreign Ministry did express “disappointment”.

South Korea’s President Moon Jae-in warned me in his BBC interview that he expected “bumps and bruises” on the way as the international community tries to persuade North Korea to disarm.

But it’s hard not to feel that both the momentum for talks and the opportunity to engage with North Korea may be slipping away.

Even at a lower level, the new US North Korean envoy Stephen Biegun has been in his job for over two months and has still not met his Pyongyang counterpart, Vice Foreign Minister Choi Sun-hui.

The root of this standoff is that North Korea and the US have never really agreed on the goalposts of “denuclearisation”.

What do they actually mean when they talk about disarmament? Yes the two leaders signed an agreement in Singapore, but the lack of detail in the deal we talked about back then is now coming back to haunt these talks and potentially scupper progress.

From the start, Pyongyang has been clear. They will not unilaterally disarm. They want a staged process where they give a little and get something in return.

That means, right now they feel they have done enough to warrant sanctions relief.

Both the US and the UN have placed tough economic penalties on North Korea.

Around 90% of its exports are banned including coal, iron ore, seafood and textiles. There are also caps on the amount of oil it can buy. If Kim Jong-un is going to build up his economy as he has promised his people, then he will need the sanctions lifted.

However, the US has also been absolute. There will be no sanctions relief until “complete denuclearisation”.

Right now, that seems a lofty and unrealistic goal. President Trump did say that “he’d love to take the sanctions off”, and then added that North Korea “would have to be responsive, too”.

Russia called a meeting this week of the United Nations Security Council to discuss sanctions on North Korean banks.

But the US Ambassador to the UN, Nikki Haley, was unequivocal: “The threat is still there. North Korea still has nuclear facilities and they’ve still not allowed inspectors in to inspect them.”

Several analysts have called on the US to adjust its thinking and approach. Bend a little before this process breaks completely. But so far there have been no signs that the Trump administration is willing to do this.

So if the US is not prepared to act, what does Pyongyang do? Last week it issued a threat in a statement from the Foreign Ministry’s Institute for American Studies.

It claimed that “the improvement of relations and sanctions is incompatible”, and that the US was “bragging arrogantly without showing any change in its stand, while failing to properly understand our repeated demand”.

The statement went on to suggest that unless the US removed sanctions, then it could restart its nuclear programme.

Let’s be clear here, several studies by US intelligence and by the UN suggest North Korea has not stopped its building or stockpiling of weapons.

But it has stopped testing missiles and nuclear weapons, which President Trump has taken as a personal victory. Mr Trump even declared that “there was no longer a nuclear threat from North Korea”.

So yes, North Korea has a choice. It could test another missile, which would be embarrassing to a US President who has declared that the problem was solved.

But that would come with huge risks.

A missile test is more likely to anger an unpredictable Donald Trump who hates when his administration shows any sign of weakness. It would, once again, raise international condemnation and is unlikely to have the desired effect of sanctions relief.

Another missile or nuclear test would also harm North Korea’s developing relationship with the South, where several companies are poised to invest as soon as the restrictions are lifted.

Kim Jong-un’s other choice is to blink first and fulfil some of his promises. He could let inspectors into Punggye-ri, the state’s only known nuclear test site.

TV cameras were brought in to witness a series of explosions there in May, which North Korea claims was its complete destruction.

President Moon said Mr Kim told him he would allow inspectors in, and there have been reports in South Korea that preparations are being made. This would allow Pyongyang to argue that they are once again keeping their end of the bargain.

North Korea pledged to close it earlier this year, but only if the US takes corresponding measures. It would be very difficult politically for Mr Kim to do this first, so the US would have to put something good on the table for Pyongyang to take this step.

It is worth mentioning that several people I speak to, who have regular contact with leaders in Pyongyang, have told me about the pressures facing Kim Jong-un as a young leader.

He is surrounded by a number of military hardliners who are not be willing to disarm, nor do they wish to be seen as bowing to US requests.

Perhaps both sides are calculating that they can simply “run the clock”, play for time and wait. The US can keep sanctions in place until North Korea takes further action.

Pyongyang can continue to issue warnings and develop other diplomatic ties.

However, this is a huge gamble for the US. North Korea’s nuclear arsenal has been labelled an urgent problem by US defence and intelligence chiefs.

That threat is still there and the longer this standoff continues, the more likely it is that Pyongyang will continue to develop weapons.

The stringent economic sanctions imposed on the state may only have a limited effect. The Trump administration had managed to get China and Russia on board with its “maximum pressure” policy for some months.

But reports suggest the borders have become porous in places and the supplies are making their way into North Korea. Kim Jong-un has proved to be a savvy political operator and has rebuilt relationships with his neighbours.

The US maintains that another summit between Kim Jong-un and Donald Trump will take place early next year.

The two leaders may prefer dealing with one another directly. But it still needs talks to take place between those lower down the chain of command to sort out the details of a deal. A timetable for disarmament and corresponding US actions for instance.

Without those details on paper, as you can see, we end up with what is the equivalent of this diplomatic game of chicken which puts president Mr Trump’s much applauded North Korea policy in danger of crashing.