United Nations investigator Yanghee Lee has expressed deep concern over potential human rights abuses committed by Myanmar’s military under the cover of a mobile phone blackout in parts of the Southeast Asian country.

“This is the first time they’ve ever declared an internet blackout. This worries me very much and I think it should worry the international community, as well,” Lee, the UN special rapporteur on Myanmar, told Al Jazeera on Tuesday.

Her comments came hours after she called for the immediate lifting of the restrictions imposed on Friday by Myanmar’s security forces in parts of Rakhine – where a brutal army crackdown has already forced hundreds of thousands of Rohingya to flee to neighbouring Bangladesh – and Chin states in the west of the country.

Lee reported that eight townships in Rakhine and one in Chin had been blacked out, with no media access and serious restrictions on humanitarian groups.

In Rakhine, Myanmar’s security forces are currently fighting the Arakan Army, a group that recruits from the mainly Buddhist ethnic Rakhine population and is battling for greater autonomy for the state.

Lee spoke to Al Jazeera’s Peter Dobbie from Rome about the situation in Rakhine, the media blackout and the stance of Aung San Suu Kyi, Myanmar’s de-facto civilian leader.

Al Jazeera: What do you think the Myanmar military may be doing?

Yanghee Lee: One can only guess what they are doing, but judging from past experience in 2016 and 2017, when they called for a clearance operation, we know what happened: they drove out about 800,000 Rohingya to Bangladesh. And now this is the first time they’ve ever declared an internet blackout. This worries me very much and I think it should worry the international community, as well.

Lee: They are acting with impunity, but when it comes to clearance operations or any security issues, the civilian government has absolutely no power over the military under the current constitution – and therefore that’s why there is a need for constitution reform.

But without a constitutional reform and the way the situation is now, the military and the security forces can do whatever they want under the name of national security.

Al Jazeera: So many people fled crackdown two years ago and live in refugee camps across the border in Bangladesh. How many people are left in Rakhine to victimise in this way, if you’ve got it right?

Al Jazeera: Have you relayed these reports to the relevant military authorities inside Myanmar, and if you have, what was their reaction?

Lee: I haven’t because they do not engage with me. Myanmar wants me replaced, so they will not engage with me. But I am sure they have seen or heard what I’ve said through media releases and and social media and other means … I have no back-door conduit to the military. I don’t think anyone does.

Lee: I’d like to know that, too. She had attended the ASEAN conference … but she has not spoken out about the issue in Rakhine state when the Rohingya were being driven out, and now with the ethnic Rakhine community she has not said a word about protection of the civilians.

These are ethnic Rakhine and other minorities residing in Rakhine state. She’s not said a word about these people either.

Al Jazeera: If you had the opportunity to direct a direct message at Aung San Suu Kyi now, what would that message be?

Lee: I would want her [you] to see what is happening in the Rakhine state for yourself.

Al Jazeera: Why is this still happening in Rakhine state? About two years ago, it was appalling, and you seem to believe it is still appalling and it is still happening. What is the mindset of the military? Is their go-to position a scorched-earth scenario? Is that what they want to get to?

Lee: Yes. We’ve seen it in the 1990s in northern and eastern part of Myanmar, the scorched-earth campaign, and we’ve witnessed it in different periods from 2012, 2014, 2016 and 2017, which was the climax of the scorched-earth [campaign], what I’ve always called hallmarks to genocide, and now I would like that this has been a genocide in the making and it’s still going on.

But now these clashes and this blackout is not focused against the Rohingya, it’s focused against … the Rakhine, they are not minorities, they are the majority in Rakhine state, and this really troubles me because now they are attacking all civilians, whether they are Rohingya or others, and we are seeing this in Kachin and northern Shan, there are still clashes, there are still internally displaced people [IDPs], right now we have about 35,000 IDPs who are not Rohingya.

This interview has slightly been edited for brevity and clarity 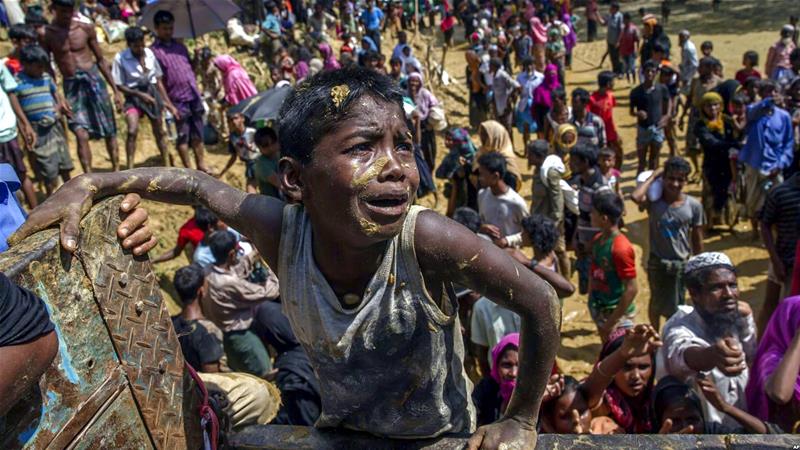