One year ago, an important political anniversary in China was met with chaotic demonstrations in Hong Kong. This year, police quickly silenced expressions of dissent. 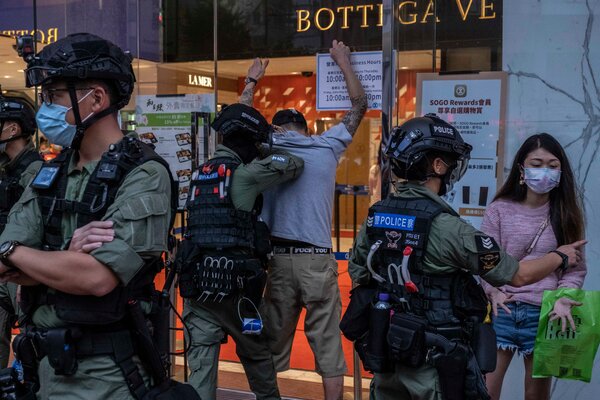 By Austin Ramzy, Elaine Yu and Tiffany May

HONG KONG — One year ago, China’s National Day on Oct. 1 was a day of protest and turmoil in Hong Kong. Demonstrators set fires and blockaded streets. The police responded with tear gas and pepper spray. One officer shot a young demonstrator with a live bullet.

The holiday on Thursday once again brought protesters to the streets of Hong Kong. This time, however, their numbers were far smaller, and they were smothered by thousands of police officers. The police corralled and searched dozens of people at a time, effectively quashing all but the briefest expressions of dissent.

The stark contrast from one year to the next shows how the Hong Kong authorities have used social distancing rules, an overwhelming police presence and a sweeping national security law imposed on the city by Beijing at the end of June to silence pro-democracy rallies. Public discontent remains high in Hong Kong, but displaying it is increasingly risky.

The police had banned protests on Thursday, citing coronavirus concerns, so activists looked for creative ways to skirt the restrictions. Some demonstrations looked more like performance art than the seas of people with thunderous chants that were hallmarks of last year’s protests.

Several demonstrators stood in the streets of Causeway Bay, a shopping district, holding up copies of Apple Daily, a pro-democracy newspaper, as though they were reading them. The papers showed full-page ads with slogans like “Protect the children, hold on to your conscience.” A teenage boy played popular protest tunes on a recorder at a crowded intersection as some demonstrators sang along. 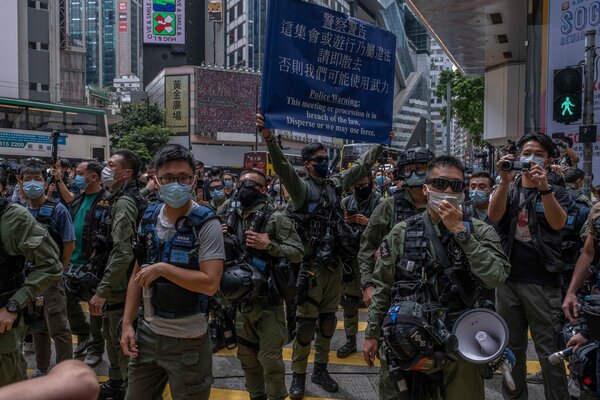 The police targeted many young people, including some who wore black, a color associated with the protest movement, herding them behind a security cordon near luxury stores. A number of older residents and people clutching grocery bags were also rounded up.