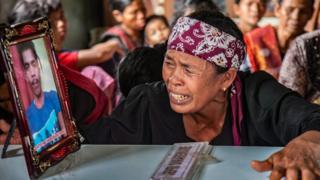 The governor of Indonesia’s eastern Papua province has called for an end to an intense military operation against independence rebels in the remote jungle-covered region.

Troops are hunting for members of the armed wing of the Free Papua Movement (OPM), who killed at least 17 construction workers early this month.

It was the deadliest attack for years.

Local officials said at least four civilians had so far been killed in the military response.

Hundreds more are said to have fled into the jungle to escape the violence.

The OPM attack in the mountainous Nduga region represents a major escalation in the decades-old low-level insurgency.

Previous reports had put the number of victims at 24.

Papua declared independence from the Netherlands in 1961 but was incorporated into Indonesia eight years later, becoming its easternmost province.

What did Papua’s governor say?

In a rare criticism of the central government, Papuan Governor Lukas Enembe said the military should now leave.

“We pay our respects to the past and present victims, but this is enough,” said Governor Lukas Enembe.

“There must be no further civilian casualties, civilians have not been evacuated. So we want all troops out first.”

He added that the pro-independence fighters were unlikely to be still in the area.

The Speaker of the Papua parliament, Yunus Wonda, told BBC Indonesia that the military operation was terrifying communities.

At least 300 villagers are reported to have fled to escape the military sweep.

“They are traumatised and very scared. They have fled into the jungle,” said Mr Yunus.

“We want people in Papua in those districts to celebrate this holy month with their families, their wives and children. Christmas should be a time of peace but not a time of fear.”

What do Papuans say the military is doing?

A local government fact-finding team found at least four civilians had been killed in the operation, which has been under way for nearly three weeks

Journalists have been unable to enter the area because of security concerns, and international media are restricted from entering Papua.

In 2015, Indonesian President Joko Widodo promised to lift the ban but in practice unimpeded reporting in Papua remains very difficult.

However, BBC Indonesia has spoken with civilians from the conflict area in the highlands regional capital Wamena.

A 14-year-old boy who asked not to be named over fears of reprisals from the military said his father had been killed.

“I saw two helicopters come down, everyone fled including my dad. Then police and military got out. And then the military shot my father.”

“I was in shock. I jumped and I was also shot at but they missed me. I ran with my older brother into jungle,” he said.

Local human rights activist Raga Kogeya said the community needed to be able to bury its dead in peace.

“We are not enemies of the state. We are citizens of Indonesia. The government has to take full responsibility for those that have been killed,” she said.

Earlier this month, Human Rights Watch said impunity for rights violators was “the norm” in Papua because of a lack of accountability within security forces and a poorly functioning justice system.

What does the military say?

It says it has come under attack while trying to retrieve the bodies of the construction workers, and insists it is not targeting unarmed civilians and only firing in self-defence.

However Papua military spokesman Muhammad Aidi told BBC Indonesia that it was difficult to differentiate between rebels and civilians.

“In the villagers, the rebels will hide weapons and mix closely with the civilians, and we cannot recognise them,” he said.

“It is very difficult because they use guerrilla warfare techniques. They could be anywhere and they know the region very well while we are outsiders.”

“We don’t know what they look like, we have never met them. So we only know them from some photos and assumptions about them.”

He said the joint military and police operation would continue.

“There is no time limit on it. The perpetrators have to be caught alive or dead.”

Who was killed in the attack?

The construction workers who were killed were from other islands.

They had been hired and brought to the Nduga area to build a vast network of roads and bridges cutting through pristine jungle.

A soldier was also shot dead when a team of police and security forces were sent to investigate the killings, authorities said.

The massive trans-Papua highway project is part of President Joko Widodo’s drive to improve infrastructure in the impoverished province.

OPM rebels say they believe the workers were working for the military.

But grieving families like 27-year-old Alpianu’s say he had taken the job to support his young family.

He had not been home since February this year.

His wife Anita Limbu Datu recalled the last phone conversation she had with him from her home in the central region of Sulawesi island.

“I said: ‘Please be careful in the highlands. When you have come back down please call me straightaway.'”

They have a daughter together and he had promised he be home in time for Christmas.

“I was so shocked when I heard what happened. I don’t really know what do to anymore,” Ms Datu said.