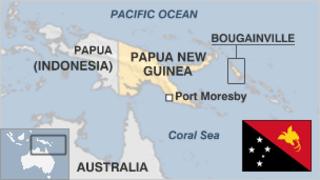 Papua New Guinea occupies the eastern part of the world’s second largest island and is prey to volcanic activity, earthquakes and tidal waves.

Linguistically, it is the world’s most diverse country, with more than 700 native tongues.

Some 80% of Papua New Guinea’s people live in rural areas with few or no facilities of modern life.

Many tribes in the isolated mountainous interior have little contact with one another, let alone with the outside world, and live within a non-monetarised economy dependent on subsistence agriculture.

Head of state: Queen Elizabeth II, represented by a Governor-General.

Prior to national elections in June 2012, both men had declared themselves to be the rightful prime minister.

Mr O’Neill was first chosen by parliament to be acting Prime Minister in August 2011 after Sir Michael, who had by then been absent from the house for several months due to illness, was declared to be no longer eligible.

In July 2016, he survived a no-confidence vote in parliament over corruption allegations following weeks of protests and civil disobedience calling for his resignation. He gained another five-year term as prime minister in August 2017 following a volatile and drawn-out election marred by violence and allegations of vote-buying.

Radio is important in Papua New Guinea, which has scattered, isolated settlements and low levels of literacy.

The government operates a national network and provincial stations. The media operate in a relatively free environment, says Reporters Without Borders.

Television coverage is limited mainly to Port Moresby and the provincial capitals.

1526 – Portuguese sailor Jorge de Meneses is the first European visitor. He names one of the islands “ilhas dos Papuas” or “land of fuzzy-haired people”.

1546 – Spanish explorer Inigo Ortiz de Retes names the other main island New Guinea because the islanders resemble the people of Guinea in Africa.

1906 – Control of British New Guinea transferred to the newly independent Commonwealth of Australia and renamed Territory of Papua.