Student leader released on bail as protesters continue to demand reform of monarchy and resignation of prime minister. 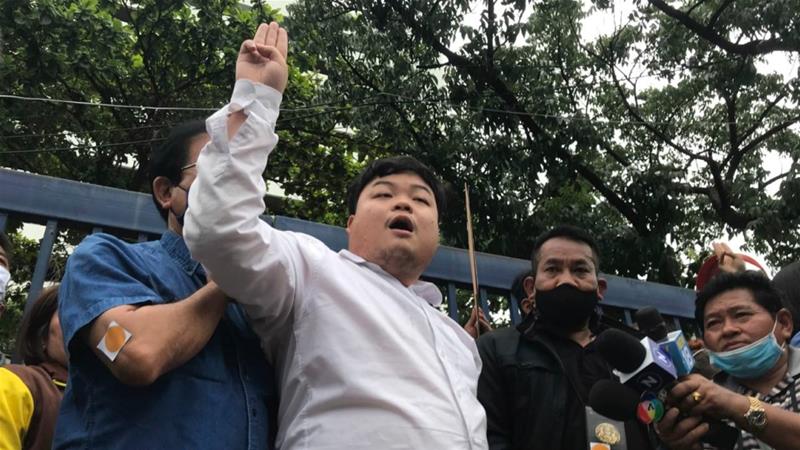 A Thai student activist and leader has pledged to continue protesting against the government and demand reform of the monarchy after being detained overnight on charges related to a demonstration last month and released on bail.

Parit “Penguin” Chiwarak, 22, was arrested on Friday and charged with breaching internal security rules and breaking regulations to stop the spread of coronavirus among other charges, by co-organising a protest on July 18.

Since that protest in July, university and high school student groups around Thailand have rallied almost daily, demanding for the removal of Prime Minister Prayuth Chan-ocha, who first took power in a 2014 military coup, and an end to the military domination of politics.

Some students have also demanded reforms to the powerful monarchy, once a taboo subject.

Parit told reporters at the court that he had been ordered not to re-offend as a condition of his bail, but that the director-general of the court had agreed that he could take part in a major protest planned for Sunday.

“My arrest must not be wasted, people must talk more publicly about the monarchy,” Parit said after reciting a 10-point call for monarchy reform issued earlier this week by one of the student group.

“We have lifted the ceiling, there is no lowering it now.”

The monarchy is protected by a strict lese majeste law that punishes anyone who offends King Maha Vajiralongkorn or his family, but Prime Minister Prayuth said earlier this year that the king had asked for it not be used.

Prayuth appealed for national unity earlier this week, but also said some of the student activist demands on the monarchy “went too far”.

Last week, two other activists were arrested and later released on charges similar to those of Parit.

On Saturday, Human Rights Watch warned that police are reportedly planning to arrest at least 31 other people, including many student movement leaders, in the coming days.

“Peaceful protests and critical expression demanding political reform should not be criminalised.”