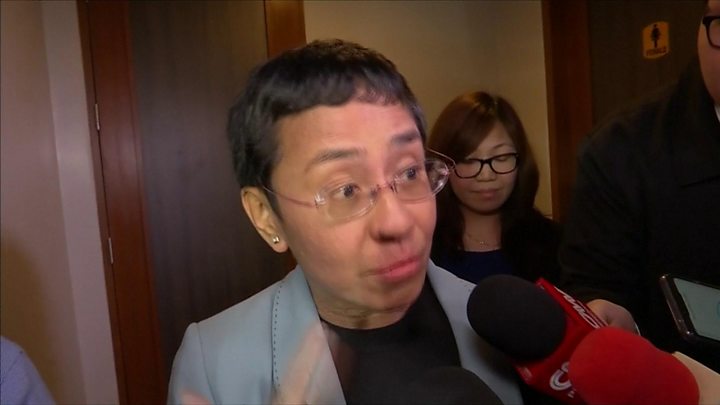 Award-winning Philippine journalist Maria Ressa has been freed on bail, the day after her arrest on charges of “cyber-libel” drew international condemnation.

Ms Ressa is CEO of Rappler, a news website critical of the government.

She was arrested at its headquarters on Wednesday by agents from the National Bureau of Investigation.

Press freedom advocates see this as a government attempt to silence the news organisation.

Ms Ressa has been accused of “cyber-libel” over a seven-year-old report on a businessman’s alleged ties to a former judge.

The charges – the latest in a string against her – carry a potential 12 years in prison.

Who is Maria Ressa?

Ms Ressa is a veteran Philippine journalist who was named a Time Magazine Person of the Year in 2018 for her work holding power to account in an increasingly hostile environment.

She spent much of her career as a regional bureau chief at US broadcaster CNN before co-founding Rappler in 2012.

Rappler is known in the Philippines for its hard-hitting investigations. It is one of few media organisations that openly criticises President Rodrigo Duterte, regularly interrogating the accuracy of his public statements and condemning his sometimes deadly policies.

In particular, Rappler has published a number of reports critical of Mr Duterte’s war on drugs, which police say has killed around 5,000 people in the last three years. In December, it also reported on his public admission that he sexually assaulted a maid.

What’s the case against Maria Ressa?

The charges of “cyber-libel” relate to a seven-year-old report on a businessman’s alleged ties to a former judge.

The libel law is controversial, and came into force in September 2012 – four months after her article was published.

Officials first filed the case against Ms Ressa in 2017, but it was dismissed by the NBI because the one-year limit for bringing libel cases had lapsed. However, in March 2018, the NBI reopened the matter.

She could serve up to a decade in prison if convicted of just one count of tax fraud.

How has the world reacted?

Activists and press freedom groups around the world have criticised the Rappler CEO’s detention.

Former US Secretary of State Madeleine Albright called it an “outrageous” arrest that “must be condemned by all democratic nations”.

The arrest of journalist @mariaressa by the Philippine government is outrageous and must be condemned by all democratic nations. I’m proud to call her a friend and to stand with her in defending the principles of a free press. https://t.co/Hy09UFsARl

Within the Philippines, the National Union of Journalists said the move would backfire, and called for protests to be held on Friday.

What does the government say?

President Duterte has previously denied that charges against Maria Ressa are politically motivated, but has publically branded Rappler a “fake news outlet” and banned its staff from covering his events. Last year, the state revoked the site’s licence.

A spokesman for President Duterte insisted the government has nothing to do with the libel case, and does not pursue critical journalists.

“That’s absolutely unrelated. The president has been criticised and he does not bother,” Salvador Panelo told DZMM radio.

BBC Philippines Correspondent Howard Johnson reports that journalists there are subjected to threats by supporters of the president, however.

Some argue that the press is biased against Mr Duterte, and that reports focus on his bloody drug war at the expense of his achievements while in office.

How has Rappler responded?

Speaking to reporters after her arrest, Ms Ressa said she was “shocked that the rule of law has been broken to a point that I can’t see it”.

Footage streamed on Facebook showed plain-clothes party officials speaking with her, while several of the site’s journalists live-tweeted what was happening.

Officers from the National Bureau of Investigations (NBI) reportedly ordered them to stop filming and taking photos.

The arrest warrant vs Maria Ressa is being served at the Rappler HQ now, an officer part of the serving party who introduced himself to be part of the NBI tried to prohibit me from taking videos — WHICH IS PART OF MY JOB pic.twitter.com/TElJzSjJer

He threatened that he will go after me if I don't stop recording. He started taking a video of me "for being stubborn."

It's my job to put it on record