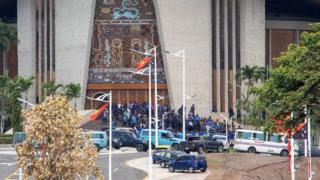 The group reportedly smashed windows and furniture in the building, located in the capital Port Moresby.

The impoverished island hosted leaders from both sides of the Pacific last week despite the high costs involved.

The summit had seen delegates stay on cruise ships and the government buy 40 Maserati luxury cars for the event.

The angry police and security forces headed to parliament to vent their anger after a meeting with police authorities over the allowances, member of parliament Bryan Kramer said in a video posted on Facebook.

A witness outside parliament described “hundreds of police and troops” on the building’s front steps, complaining they had not been paid their special bonus of 350 kina (£81, US$104), according to news agency AFP.

“It was the armed forces, police and correctional workers. They have entered the parliament and just smashed everything up,” parliamentarian Allan Bird told Reuters.

“They were yelling: ‘corrupt government, bloody government’ and so on. They were taking their frustration out on the furniture,” he said according to the news agency.

Special forces from Australia, the US and New Zealand were flown in to help the local security efforts in the notoriously dangerous city.