KABUL, Afghanistan — Nargis Mohammad Hasan was serving as an Afghan police officer when she shot and killed an American civilian adviser on Dec. 24, 2012, in Afghanistan’s capital. It was considered the first known attack by a woman in the Afghan security forces on a coalition member since the U.S. invasion in 2001.

Ms. Hasan’s possible motives for the killing have always been murky. Having emigrated from Iran, she was portrayed by internal investigations and Afghan and U.S. officials as someone who was either mentally unwell, or was an Iranian agent, or both — theories that were further clouded by the Taliban’s decision last year to call for her release even though they acknowledge that she was not a member.

Originally sentenced to death by Afghan courts, she had remained in prison. Then this past summer, she was freed as part of the United States’ peace deal with the Taliban after U.S. State Department negotiators dismissed the F.B.I. and diplomats’ opposition to her release, according to U.S. and Afghan officials.

As peace negotiations between the Afghan government and the Taliban continue in Qatar, the internal debate in Washington over Ms. Hasan’s fate illustrates one of the difficult decisions that efforts to end a war can bring. To some officials, particularly those inside the F.B.I. and other national security organizations, her release by the Afghan government, under pressure from the Trump administration, was an affront to justice.

Other American officials, though they acknowledged that her crime was egregious, saw Ms. Hasan as not being the kind of high-level terrorist figure who could pose a future threat to Americans. So her release, despite her conviction, became part of the price the United States was willing to pay for the prospect of peace in Afghanistan. 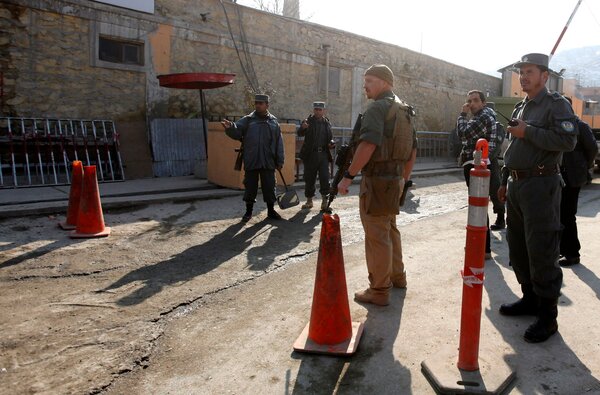 The quiet acceptance of the release of people who killed Americans over the course of the long war has been a byproduct of the U.S. government’s push to accelerate its departure from Afghanistan.

Unclaimed attacks on U.S. bases in the country have gone mostly unacknowledged by the American military, most likely in an effort to prevent further scrutiny of the U.S.-Taliban deal made in February, especially of the insurgent group’s compliance with one of the deal’s core tenets: not attacking American or coalition forces as they depart.

Last month, a car bomb detonated at Camp Chapman, an important C.I.A. base since the early days of the war, according to a U.S. official. There were no American casualties, and several Afghans were wounded and at least one was killed. News of the attack was earlier reported by Foreign Policy.

Under Zalmay Khalilzad, the U.S. peace envoy, the American government has been willing to take dramatic steps, even in the face of opposition from the military and law enforcement, to extricate the United States from its longest war and bring about some type of peace in Afghanistan.

In addition to the large-scale prisoner releases, the Trump administration has pushed for a quick withdrawal of military forces in the country, often over the objections of the Pentagon. The U.S. military has drawn down to 2,500 troops, still stationed at roughly a dozen bases in the country, despite opposition from U.S. lawmakers.

But as President-elect Joseph R. Biden Jr. prepares to take office, a key question remains — whether he will keep Mr. Khalilzad in place, or, push for a veteran diplomat of his own choosing. Mr. Biden has long had a skeptical view of a sizable American presence in Afghanistan, but unlike President Trump, he has also argued for a counterterrorism force in the country.

The F.B.I., according to U.S. officials, placed Ms. Hasan on a list of people who should not be released as part of the Feb. 29 deal between the United States and the Taliban, in which the U.S. agreed to push the Afghan government to free 5,000 prisoners. Officials in Australia and France also pushed, to no avail, for a small number of the 5,000 prisoners, those who were convicted of killing their citizens, to remain locked up.

But Secretary of State Mike Pompeo, who oversaw the negotiations and guided them based on his interpretation of what Mr. Trump wanted, told foreign governments that “there was no alternative but to move forward with the prisoner releases as the parties had agreed,” according to an official who worked on the February agreement.

Internally, the State Department eventually overruled the request to keep Ms. Hasan behind bars, as well. The decision was part of a broader effort by the White House to expedite talks between the Afghan government and the Taliban before the November presidential election in the United States, the officials said.

In a statement to The Times, a State Department spokesperson said the prisoner swap was “a difficult decision for the Afghans to make” and for the United States to accept, adding that it was “not something we are happy about.”

The chargé d’affaires in Kabul, Ross Wilson, later said on Twitter that the United States had not “advocated” for an interim government.

For now, it’s unclear whether Ms. Hasan could be arrested and charged in the United States for the 2012 shooting of the American contractor: Joseph Griffin, 49, of Mansfield, Ga.

Zabihullah Mujahid, a spokesman for the Taliban, denied that Ms. Hasan had even carried out the killing, saying she was one of a handful of women released under the deal who were “imprisoned on false charges for being members of Taliban families.” Mr. Mujahid provided no evidence explaining the assertion.

But the shooting was recorded by at least one surveillance camera, according to U.S. military documents detailing the attack. Mr. Griffin’s death came at the end of a watershed year when such attacks by Afghan security forces accounted for 15 percent of coalition troops who were killed or wounded, threatening to derail the war effort.

American military, Afghan intelligence service and court documents paint a conflicting picture of Ms. Hasan and her motivations for killing Mr. Griffin. In one account outlined in investigation documents, Ms. Hasan, a uniformed police officer who is also known as Narges Rezaeimomenabad, according to her Iranian passport, was trying to kill herself after a fight with her husband and said she had fired on Mr. Griffin so she herself would be killed by security forces.

In another theory, she was trying to secure an Iranian visa for her family. To do so, according to the documents, she was directed by an Iranian employee at the embassy in Kabul to kill a high-profile Afghan official or foreign adviser.

But it is unclear whether Ms. Hasan has any ties to Iranian intelligence operatives. Some American intelligence officials are deeply skeptical that she is an agent of Tehran, or was at the time of the shooting, according to American officials.

Iran’s involvement in the Afghan war has shifted since 2001, underscoring the changing geopolitical currents over the war’s duration. On one hand, Tehran’s official line has denounced the return of the Taliban as a direct threat to Iran. But on the other, Iranian operatives have made quiet overtures to the insurgent group, offering weapons and other equipment, in Afghanistan’s southwest, Afghan officials say.