SINGAPORE – Automotive workshop practitioners said mechanical jacks are not recommended for undercarriage repairs, but if they have to be used, additional safeguards must be in place.

In response to news of one SMRT bus technician killed and another injured after one of two car jacks supporting a bus gave way on Sunday (June 6), Singapore Motor Workshop Association (SMWA) adviser Joey Lim said commercial vehicles should be lifted with hydraulic jacks. Sturdy steel stands should then be placed underneath them.

Mr Lim, who is managing director of workshop Harmony Motor, said the SMWA put in place a code of practice last November which addresses the use of lifting equipment for mechanics to access undercarriages.

The code of practice states that vehicle lifts must also have safety lock features to prevent unintended lowering.

Mr Francis Lim, third vice-president of the SMWA, said ideally, heavy duty hoists should be used to lift the entire vehicle off the ground. This is not only safer, but it also makes working on the vehicle more comfortable, as the mechanic is not lying on his back.

“We don’t recommend jacks, but if you have to use a jack, use one for the appropriate vehicle weight,” said Mr Lim, managing director of workshop BCC Automotive. “And you must put vehicle stands in place after lifting the vehicle.”

On Sunday, SMRT technician Thin Soon Fatt, 43, was killed while his co-worker Tan Kaek Seng, 44, was injured when a car jack supporting a bus they were working on gave way in a workshop at SMRT’s Ang Mo Kio bus depot. Police are investigating the incident.

The Straits Times understands the men were working on a new BYD electric bus which can accommodate 19 seated and five standing passengers, plus one wheelchair bay.

According to BYD’s website, the bus has a gross weight of 7.3 tonnes, which means it is likely to weigh in excess of 5.5 tonnes when empty – nearly four times the weight of a compact family sedan.

According to the Workplace Safety and Health Council, the technicians were working under a bus which was raised using two car jacks. The bus fell on the workers when one of the jacks gave way.

That the men were working under a bus lifted by two car jacks was met with disbelief in the industry. 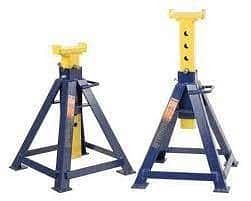 One tour bus operator said: “It’s hard to believe anyone would risk going under a bus sitting on car jacks.”

Another pointed out that there would usually be fewer people working on Sunday, and hence there should not be a shortage of proper equipment such as hydraulic jacks and stands.

In a Facebook post on Thursday, the SMWA urged all motor workshops to buy a copy of its code of practice from the Singapore Standards Council and adopt safe measures for their workplaces.

“Having a safe workplace is the best welfare you can provide for your colleagues,” the association said.