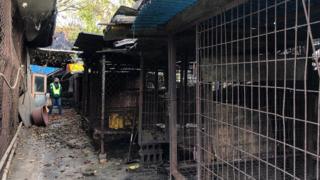 Officials in South Korea have started to dismantle the country’s largest dog slaughterhouse.

The Taepyeong-dong complex in Seongnam city, south of Seoul, will be cleared over two days and converted into a public park.

Dog meat is a common delicacy in South Korea, with approximately one million dogs consumed there every year.

Activists have sought to end the custom, while more South Koreans have chosen to keep dogs as pets.

“This is a historic moment,” Korean Animal Rights Advocates (KARA) said in a statement. “It will open the door for more closures of dog meat slaughterhouses across the country, expediting the decline of the overall dog meat industry.”

The Taepyeong-dong complex – an important source of meat for restaurants across the country – housed at least six slaughterhouses, holding several hundred animals at a time.

Campaigners from Humane Society International (HSI) described conditions inside the complex as “horrifying”. They reported seeing electrocution equipment used to slaughter the dogs, knives and a de-hairing machine.

Nara Kim said: “It was a stain on the city of Seongnam and we are so pleased to see it bulldozed.”

Every summer in South Korea three days are designated as special festivals, and dog meat dishes are served in a highly spiced stew.

Currently no laws exist on how to treat or slaughter canines for meat in the country. Western campaigners have in recent years attempted to interfere with the dog meat trade by staging mass rescues.

The number of dog meat restaurants has been falling in South Korea. Seoul once had 1,500 restaurants serving the dish, but this had dropped to about 700 by 2015.