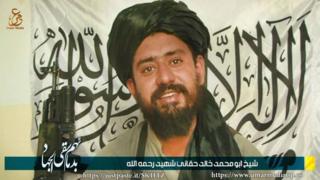 The fatal shooting of two men in the heart of the Afghan capital Kabul – a city unfortunately used to violence – went almost unnoticed.

But then, the dead men had hoped to go unnoticed: according to one source, they were both carrying fake IDs.

Exactly what they were doing in Kabul, and who killed them, remains a mystery that touches upon the murky links between security services and extremist groups in the region.

Who they really were, at least, has become clear. According to sources in Pakistani intelligence and militant circles, the men were senior members of the Pakistani Taliban – a group that has killed hundreds of Pakistanis in suicide bombings and other attacks.

One of the dead men was Sheikh Khalid Haqqani, who held a key position in the Pakistani Taliban’s leadership council, and formerly served as the group’s deputy leader.

He had been accused of involvement in several high-profile attacks on Pakistani politicians and linked to one of the country’s deadliest militant attacks, the 2014 assault on a school in Peshawar, which left more than 150 people – mainly children – dead.

The second man was Qari Saif Younis, a military commander within the group. In a statement on Thursday, the Pakistani Taliban confirmed the men’s identities and their deaths but gave few other details.

According to one militant source, the men had been due to hold a secret “meeting” in Kabul, on the direct orders of the group’s leadership, apparently travelling from the eastern Afghan province of Paktika.

The militant would not say who they were meeting. According to a source in Pakistani intelligence, the men’s bodies were discovered in the vicinity of the high-end Intercontinental Hotel – the site of two deadly attacks in recent years.

The deaths occurred last week, but the source in the Pakistani Taliban said the group’s leadership had initially ordered the news to be kept “secret”, partly as they were rattled by the assassinations, and partly to avoid awkward questions about why the men were in the city.

Pakistan has long been accused of sponsoring the Afghan Taliban, and providing them sanctuary within the country. It’s alleged Afghan intelligence services developed links with the Pakistani Taliban in response.

The group, which has been severely weakened in recent years, is now based in the east of Afghanistan, in areas out of the control of the country’s government.

The statement from the Pakistani Taliban said the men were killed in a clash with American forces. The US has been holding discussions with the Afghan Taliban, aimed at bringing an end to the 18-year insurgency. Pakistan is believed to be key in helping persuade the group to reach a negotiated settlement.

The source within the group acknowledged it was also possible that gunmen or militants linked to Pakistani intelligence services were responsible.

They have in the past conducted other audacious assassinations, targeting figures wanted by Pakistan who were living in Afghanistan. For example, in December 2018 a suicide bombing in an upmarket district of the southern city of Kandahar killed a separatist Pakistani leader who had been living there in exile.

Conversely, figures linked to the Afghan Taliban have previously been killed in Pakistan. In 2013, one alleged senior Afghan militant figure was shot dead in a bakery in Islamabad.

According to sources within the Pakistani Taliban, the bodies of the men killed in Kabul, Sheikh Khalid Haqqani and Qari Saif Younis, were handed over to the group, and a large funeral was held for them on Monday in their stronghold in eastern Kunar Province.

Of course, how the bodies ended up back in the hands of their militant group remains another part of the intrigue.