Tens of thousands are still hoping for rescue, with priority recently being given to Americans over Afghan allies, according to a U.S. official and those involved in the effort. 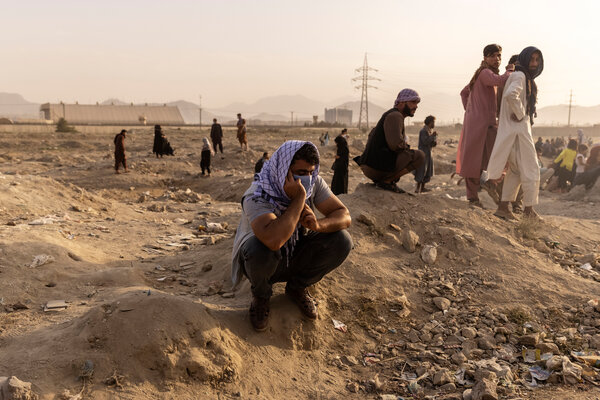 As a desperate U.S. effort to evacuate Americans from Afghanistan gained momentum on Monday, Taliban leaders rejected a suggestion from President Biden that American forces might remain past an Aug. 31 deadline to complete the operation, injecting fresh urgency into an already frantic process.

American officials are increasingly worried that even with the vast number of Afghans, Americans and people of other nationalities evacuated in recent days — a total of about 10,400 people in the 24 hours from Sunday to Monday alone, according to the White House — many still remain to be rescued. In recent days, that operation has increasingly focused on the Americans still left, over the Afghans who worked with the United States.

On Monday, a State Department official said that some former Afghan military interpreters or other close U.S. allies, a designated priority group for evacuations, were being turned away from the airport by American officials in order to give priority to U.S. passport and Green Card holders in recent days. The official was not authorized to brief the press, and spoke on condition of anonymity.

The official’s account was supported by interviews with Afghans who have approached the airport in recent days, and with American veterans’ groups and other organizations that have tried to organize evacuations for interpreters and other Afghans at risk from the Taliban.

On Monday night, the State Department denied the accounts of Afghans’ being turned away. In a statement responding to questions from The New York Times, the department said, “Our overriding priority remains to put as many people as possible on departing planes as quickly as possible.”

There are still thousands of Americans, and a far larger number of Afghans who supported the two-decade war effort, believed to be stuck in a capital where signs of the Taliban tightening its grip were everywhere on Monday. Many people were hiding at home, terrified of encountering Taliban checkpoints on their way to the airport, according to interviews with The New York Times. Many more Afghan allies are still stranded in outlying cities and towns.

The Pentagon has begun deploying helicopters and troops into select spots in Kabul to extract stranded American citizens, including at least two cases in which a total of 350 Americans were picked up and taken to the airport, the Pentagon said. And as of Monday, Pentagon officials said that the military, which has 5,800 Marines and soldiers in Kabul, had helped to evacuate a total of 37,000 people from Afghanistan since Aug. 14, the day before the capital fell to the Taliban.

But at Kabul’s international airport, where all the flights are being organized, chaos and violence were still keeping thousands of Afghans from entering for evacuation.

On Monday, gunfire erupted in the tense, milling crowds outside the airport’s North Gate, which is controlled by American troops. A member of the Afghan security forces died in a firefight with unidentified attackers, according to the German military. It did not specify which group the Afghans were affiliated with. Three other members of the Afghan forces were wounded in the skirmish. American and German soldiers were also drawn into the fight but were not harmed.