Hundreds of thousands of oil lamps illuminated the northern Indian city of Ayodhya as part of the festival of Diwali, casting a glowing light over the city on Tuesday.

But the lamps did not just set the scene for the annual five-day celebration, also known as the festival of light, celebrated by millions in India and around the world. They also set a world record, according to officials.

The 300,150 oil lamps broke a Guinness world record when they burned simultaneously for more than five minutes and provided a stunning spectacle for thousands of city residents and visitors who took part in the lighting. The flickering lamps cast a glow on the Sarayu River, considered sacred in the Hindu religion.

It took thousands of volunteers to light the lamps, called diyas, which were placed alongside the river, on steps and in city squares. 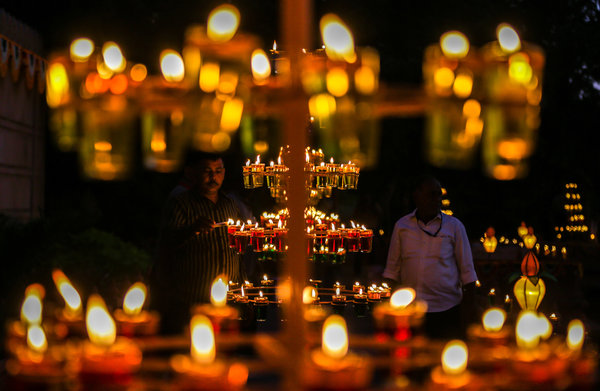 The government of the state of Uttar Pradesh affirmed that the lamps set a record, as did the state’s tourism office, which was instrumental in organizing the spectacle. Representatives from the Guinness World Records handed local officials a plaque after determining the number of lamps by flying a drone over the city.

The city also attempted to break the record for the number of lamps displayed last year, but strong winds extinguished many of the lights.

Diwali is observed by members of the Hindu, Sikh and Jain faiths and coincides with the Hindu New Year. The festival is a celebration of new beginnings and the triumph of good over evil. The date changes each year and is typically held between October and November, depending on when it falls on the Hindu calendar.

The city of Ayodhya is considered holy by Hindus as they believe the god Ram was born there and returned to the city after 14 years in exile.

Tuesday’s Diwali celebrations also included an appearance by Kim Jung-sook, the wife of President Moon Jae-in of South Korea. Ms. Kim attended the festival in Ayodhya after meeting with Prime Minister Narendra Modi during a four-day visit to India.

Her presence was symbolic as Koreans have a special connection to the city. Legend tells of a princess from Ayodhya who traveled to Korea 2,000 years ago, eventually marrying a local king and becoming queen.

But while Diwali is seen as a celebration of light and rebirth, it has also been a cause for concern in recent years, as air pollution from lamps and fireworks lit as part of the celebrations exacerbates already poor air quality in some of the country’s major cities.

The city of Delhi on Wednesday reported air quality ranging from “poor” to “very poor,” according to the country’s Central Pollution Control Board.

Images of a thick smog hanging low over the city were in stark contrast to the scenes of lights glimmering in Ayodhya, about 400 miles southeast of Delhi.

The direction of winds and the burning of brush in the vicinity of Delhi contributed to the problem, according to the Times of India, and fireworks and lamps could make the situation worse.

Megan Specia is a story editor on the International Desk, specializing in digital storytelling and breaking news. @meganspecia