You’re reading this week’s At War newsletter. Sign up here to get it delivered to your inbox every Friday. Email us at [email protected].

It is especially relevant now, in the wake of President Biden’s announcement that all American troops will withdraw from the country by September. Books like Morgan’s will serve as the epitaphs for the failures of the American military in its two-decade-long war.

Thousands of troops passed through the Pech in Afghanistan’s violent east, where famous documentaries and films were born and the Korengal Valley turned practically into a household name. The soldiers there built and tore down outposts. Went on hundreds of patrols. Fought and died. Morgan, a military affairs reporter, documents it all from the beginning to the end, a herculean task in a conflict that has gone on for so long, and with characters who continuously rotated in and out every few months. These men and women all left their own marks on a military strategy that was never understood or clearly defined.

Morgan spoke with The Times about the book and what he thinks comes next in the Pech after the United States leaves Afghanistan.

What was the main event that spurred you to write the book?

I first went to the Pech in 2010 — when I was a freelancer and I was still in college — for an embed with a battalion from the 101st Airborne Division. That visit just got me obsessed. It was my fourth reporting trip to the wars, and I think the 12th battalion I’d embedded with in a combat situation, but the fighting in the Pech was just so different, with the amount of artillery being fired, the restrictive terrain, the gunfights and how outrageous the terrain was.

And at these little outposts, like COP Michigan at the mouth of the Korengal, which was the most frequently and heavily attacked outpost in eastern Afghanistan at the time, nobody really knew when or why they’d been built, even though it had just been a few years earlier.

Initially it was for a senior thesis project that I turned in a decade ago — I helped break the news of the imminent U.S. pullout from the Pech in 2011 in a story for this paper with C. J. Chivers and Alissa Rubin because I stumbled onto the information while doing that thesis research. And then later it was for this book, as I kept going back to Afghanistan and U.S. troops got sucked back into the Pech.

What kind of feedback has the book gotten so far?

The first thing that struck me was how many of the reviews were being written by military veterans. Then what blew me away was a pair of reviews, both by Afghanistan infantry veterans, in two publications that both cover war but with drastically different audiences, and the reviews had quite a bit in common. And a big part of what they had in common was a sense of bitterness over how a lot of heroic fighting had been built on really shaky foundations in terms of the intelligence and assumptions and decisions that led us into these valleys, and grief over how casualties had mounted as military units continually reinvented the wheel and kept flying back up to the same villages in the same valleys to go looking for firefights year after year, without a lot of knowledge being passed down or absorbed. 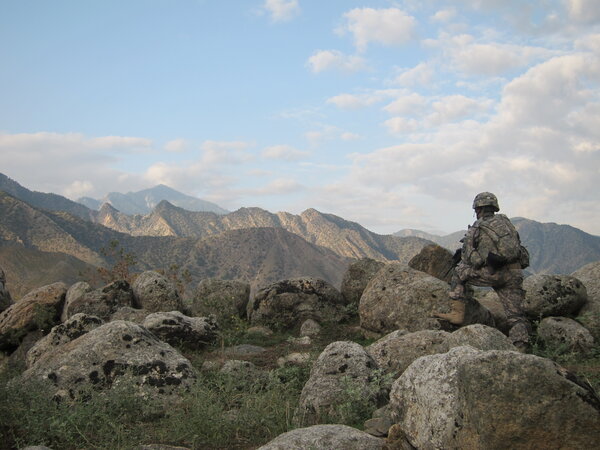 What happens after the U.S. completely withdraws from Afghanistan?

I think in the Pech and its tributaries, we’re already well into the post-withdrawal phase. It’s been this way at a bunch of points in the story: The U.S. embraced the counterinsurgency outpost in the Pech a couple of years before it did in other places like Kandahar and Helmand. And then when the surge was underway in those places, the battalion I first visited in the Pech was saying, “This isn’t working, time to leave,” and they did — only for them to get sucked back out there and have to reopen some of the bases, as would wind up happening in a lot of parts of Afghanistan a few years later during Trump’s mini surge.

So I think for the Pech and its tributaries, the post-2021 future is already happening. The government and the Taliban are fighting each other, but they’re also observing truces with each other and finding ways to accommodate one another on governance and especially on fighting ISIS, which is their mutual enemy.

How does this bode for the U.S. counterterrorism strategy in the region?

The U.S. has kind of outsourced our counterterrorism mission against ISIS to this weird Taliban-government partnership, to the extent that in the months before the Doha deal, the Rangers were actually using Reaper strikes to help the Taliban fight ISIS. I wrote in the book that there was a Ranger targeting team that jokingly called themselves the “Taliban Air Force” because of this, and since the book came out someone told me they even had a “Taliban Air Force” sign in their ops center, which is a detail I wish I could’ve included.

We’re going to be seeing in the months ahead whether the Taliban are willing to kind of act as our surrogate for counterterrorism like that in other parts of the country — I think where ISIS is concerned, they will, but it seems pretty clear that where Al Qaeda is concerned, they won’t.

This interview has been condensed and edited for clarity.

At least 147 pro-government forces and 25 civilians have been killed so far this month. [Read the casualty report.]

Here are five articles from The Times that you might have missed.

“As good as our intelligence and over-the-horizon capabilities are, there is no substitute for being there.” Drones, long-range bombers and spy networks will be used by the United States and Western allies in an effort to prevent Afghanistan from re-emerging as a terrorist base after American troops leave the country. [Read the article.]

“I am so worried about my future. It seems so murky. If the Taliban take over, I lose my identity.” Many Afghans fear that without the umbrella of U.S. protection, the country will be unable to preserve its modest gains toward democracy and women’s rights. [Read the article.]

“He’s dealing with the kiss of death from his own closest partner.” The Taliban are gaining militarily in Afghanistan, and President Ashraf Ghani’s international supporters are impatient with the stumbling peace process. [Read the article.]

“There’s no easy answer, no victory dance, no ‘we were right and they were wrong.’” Was it worth it? After two decades of midnight watches and gut-twisting patrols, after all of the deaths and bloodshed and lost years, that is the one inescapable question among many of the 800,000 Americans who have served in Afghanistan since 2001. [Read the article.]

“The I.S.I., with the help of America, defeated America.” Pakistan’s military stayed allied to both the Americans and Taliban. But now the country may face intensified extremism at home as a result of a perceived Taliban victory. [Read the article.]

We would love your feedback on this newsletter.

Please email thoughts and suggestions to [email protected]. Or invite someone to subscribe through this link. Read more from At War here, or follow us on Twitter.