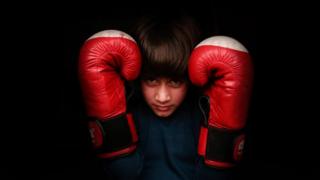 A nine-year-old girl has created history in Indian-administered Kashmir.

She has been winning local championships since last year, and now aspires to participate in the Olympics.

Tajamul comes from a village in Bandipora district, some 65km (40 miles) from the main city of Srinagar. Her father works as a driver with a construction company and earns 10,000 rupees ($146; £117) a month.

She began kickboxing at an early age and picked up a gold medal in a state championship in Jammu last year.

She defeated a 13-year-old opponent to pick up the gold medal in India’s national kickboxing championship in 2015.

“I was a little afraid when I saw her [my opponent]. But then I said to myself that age or body structure does not matter. I will remain focused and give it my best shot,” she said, after her win.

Tajamul began kickboxing in 2014 when she joined a local martial arts training academy.

“I was walking near the stadium here when I saw many young boys and girls training. I saw them punching and all that and told my father that I wanted to join them and he let me,” she told a journalist.

Every day she puts on her boxing gloves, punches the sand bag and does her stretches under the watchful eyes of her local coach Faisal Ali.

Mr Ali says she has sometimes practised up to 25 hours a week.

Earlier this month, Tajamul won the gold medal in the sub-junior world championship, winning six bouts in five days. Some 90 countries participated in the event, where she defeated opponents from China, Japan, France, Italy, Canada and the US.

Tajamul’s neighbours are turning up in droves to congratulate her after her return from Italy. Many garland her, shower her with gifts and carry her around the village.

She has become a celebrity of sorts as people recognise her on the streets and take selfies with her. She has also become an inspiration for the youth in the Kashmir valley.

“It is in their genes. All the siblings are champions, but Tajamul is far ahead of the pack,” Shabnam Kounser, principal of her school told the Press Trust of India news agency.

“She has a fighting spirit even though she looks soft-spoken and cute. Do not be fooled by her innocent looks, they are deceptive.”

Her mother has been very supportive of her daughter’s sporting efforts.

Tajamul is close to her younger brother, Adnan-ul-Islam, who wants to follow in her footsteps. She often plays with Adnan and does not mind pretending to lose to him.

A student of the Indian Army’s Goodwill School, Tajamul frequently tops her class and participates in all extracurricular activities at school.

“She dances well. She has her own team here and teaches them dancing. She is a bright kid and very good at studies,” Ms Kounser says.

Tajamul says she wants to become a doctor.

“It will have its own benefits. I will first break my opponents bones and then treat them,” she says with a laugh.