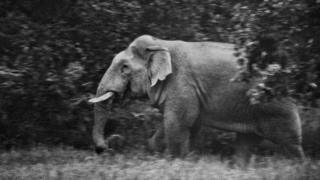 India is one of the largest producers of coal in the world and more than half of its commercial energy needs are met by coal.

But unregulated mining has caused serious health and environmental issues, and led to growing conflicts between elephants and humans.

In the coal-rich central state of Chhattisgarh, for example, fly ash has caused respiratory problems and serious illnesses like tuberculosis among people, but their troubles don’t end there.

Forests are being cleared for coal mining and wild elephants are entering villages in search of food and attacking people.

Photojournalist Subrata Biswas has documented the fallout of India’s dependence on coal.

“As thousands of acres of forest land are destroyed to mining, foraging elephants attracted by the crops in the fields often enter villages, resulting in an alarmingly high number of human-elephant conflict situations,” says Biswas.

Officials estimate elephants have been responsible for 8,657 incidents of property damage and 99,152 incidents of crop damage in Chhattisgarh between 2005 and 2014.

“We were sleeping when the elephants broke into our room. Somehow we managed to escape but I fractured my left leg when a large part of the wall fell on my leg. My husband saved my life,” says Rujri Khalkho, 70, whose home was damaged by a herd of wild elephants almost a year ago.

Deaths of elephants due to electrocution have become common in the state.

In Dharamjaigarh, the most affected area, officials have recorded 30 elephant and 75 human deaths so far.

“There is no fresh air to breath, fresh water to drink. Coal has usurped everything here.”

“We lived next to this mine for almost 10 years and watched helplessly as our wells went dry, forests disappeared and fields become unproductive,” says Girja Bai Chauhan.

“We have lost almost eight acres of our fields to the mine and authorities haven’t fulfilled a single promise they made while acquiring land. They sent us into a dark future and unhealthy environment to live and breathe in.”

Environment activists say that every year approximately 50 million tonnes of fly ash is generated by power plants in Chhattishgarh but not even the half of this amount have been reutilized to reduce the pollution from fly ash.

Fly ash is known to contain trace elements such as arsenic, barium and mercury among others, and unlined ponds like this could be polluting groundwater by leaching.

“The ash is everywhere. When the wind blows, everything is coated with a layer of white grey ash. The road, ponds, our houses, sometimes even our spectacles get coated with a fine layer of the ash,” says Biswas.

He lives in a village next to an open cast mine where lung diseases such as coal workers’ pneumoconiosis (CWP), silicosis and tuberculosis have become common ailments.