BANGKOK — During his decades as a lawyer in Myanmar, U Khin Maung Zaw has lost nearly all of his cases. It is a record that fills him with pride.

“My motto, and the motto of human rights lawyers in Myanmar, is simple,” he said. “The case is lost, but the cause is won.”

Mr. Khin Maung Zaw, 73, is now representing yet another client who is unlikely to receive a fair trial: Daw Aung San Suu Kyi, the 76-year-old civilian leader of Myanmar whose elected government was toppled by an army coup in February.

The crimes she has been charged with include engaging in sedition and corruption, violating a natural disaster management law and importing walkie-talkies without proper licenses. If convicted, Ms. Aung San Suu Kyi, who earlier spent 15 years under house arrest, could be locked up for the rest of her life.

For months after being hired to represent her, Mr. Khin Maung Zaw was not able to meet Ms. Aung San Suu Kyi. He has been allowed to see her on only four occasions, for 30 minutes each time.

“It is not so perfect,” Mr. Khin Maung Zaw said. “We must be careful with the time.”

Myanmar’s judicial system is decidedly imperfect. There is a paucity of justice and a plethora of paperwork, nearly all of it still processed by typewriter since the computer age has bypassed the country’s legal bureaucracy. Judges lack independence. Since the coup, dozens of lawyers have been imprisoned and nearly 900 civilians have been killed.

None of this has stopped Mr. Khin Maung Zaw, whose reverence for the law seems to exist in inverse proportion to its just application in Myanmar. 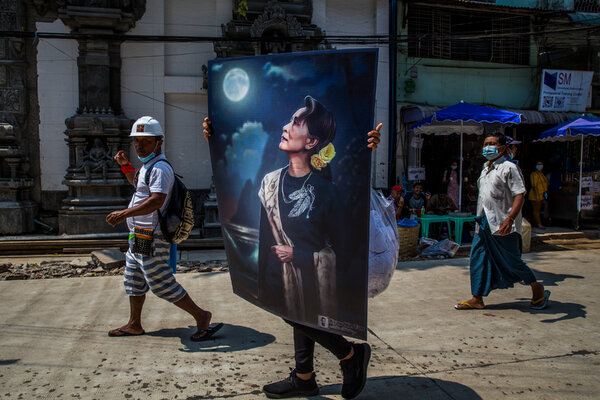 “Maybe people will think, ‘It is not so good to hire him, because he loses all his cases,’” Mr. Khin Maung Zaw said of himself. “But, you know, they have no choice. They are stuck with me.”

Mr. Khin Maung Zaw was born in a logging town in central Myanmar less than two weeks after the country of Burma gained independence from Britain in 1948. The assassination months before of eight of the country’s independence heroes, including Ms. Aung San Suu Kyi’s father, sucked some of the fizz from the independence celebrations.

Within a few years, Burma, later renamed Myanmar, was beset by a communist insurgency. Ethnic minorities threatened to secede from the union. An army coup in 1962 began decades dominated by military rule.

Mr. Khin Maung Zaw’s parents, both ethnic minorities, joined the communist movement. His mother, a more fervent comrade than her husband, died when Mr. Khin Maung Zaw was an infant. His father drifted from his socialist ideals and became a successful timber merchant.

But Mr. Khin Maung Zaw still carried his mother’s revolutionary zeal. He considered his father a “capitalist traitor.” As a 17-year-old at Mandalay University, he tried to form a student union, something that had been banned during the despotic rule of Gen. Ne Win. He printed and passed out copies of the Universal Declaration of Human Rights, the United Nations document that was published the year Burma and Mr. Khin Maung Zaw came into being.

For his activism, he was sent to a prison camp on the Coco Islands, a tropical gulag archipelago in the Bay of Bengal. Only after dozens of political prisoners, including Mr. Khin Maung Zaw, launched hunger strikes — eight people starved after 56 days — was the penal colony shut.

In 1972, he was released from prison and returned to his studies. A year later, he joined a student protest and was imprisoned for a year, then for another two years in 1978. All in all, he spent nine years in prison.

Mr. Khin Maung Zaw had gone to college to study geology, then dabbled in literature, considered history and ended up studying law. He was 37 by the time he got his law degree from Mandalay University.

“I thought maybe it would be good if I was arrested again or my friends got arrested,” he said.

While his classmates became judges or prosecutors, Mr. Khin Maung Zaw took the cases that few others would. He racked up a sizable collection of defeats, defending murderers, rapists and political prisoners. The third category, he said, was the most hopeless.

Earlier this century, Mr. Khin Maung Zaw tangled directly with the military when he defended hundreds of farmers who lost land after the junta shifted the capital from Yangon to a hot plateau in central Myanmar. Most of the farmers had no land titles but had worked their fields for generations. They were charged with trespassing. Some were jailed for speaking out.

Today, Naypyidaw is one of the world’s most surreal capitals, an empty expanse punctuated by grandiose buildings that are already falling into disrepair. Some of the former farmers have taken jobs sweeping the broad avenues that crisscross the capital. There is little traffic to disturb their brooms.

When Ms. Aung San Suu Kyi’s National League for Democracy won elections in 2015, beginning a precarious power-sharing with the military, Mr. Khin Maung Zaw distanced himself from the political party.

“I don’t trust any government anywhere, because I have roots in communism,” he said. “The law, the Parliament, they are all tools of the ruling class, so I decided to stay quite far away.”

In 2017, Mr. Khin Maung Zaw took on the case of two Reuters reporters who were imprisoned after uncovering a massacre of Rohingya Muslims. That year, the military had launched a campaign of murder, rape and arson, driving three-quarters of a million Rohingya into neighboring Bangladesh.

Ms. Aung San Suu Kyi, the de facto leader of the civilian government, defended the army. She snapped at a former U.N. envoy who urged the release of the reporters. They spent more than 500 days in jail.

“I was in opposition to Daw Aung San Suu Kyi for many things,” Mr. Khin Maung Zaw said. “I have an ethical duty to trust the law, but in my experience I have found that the judiciary during the last few years was not so reliable.”

After the military staged its coup in the pre-dawn hours of Feb. 1, Mr. Khin Maung Zaw watched in alarm as Ms. Aung San Suu Kyi was accused of a litany of charges that he believes were politically motivated.

“I have stood against her, but whatever she is, she is still the democratically elected leader and a symbol of democracy in our country,” Mr. Khin Maung Zaw said. “Whatever her defects, whatever differences we have, I will stand for her stoutly, because when the military took power they destroyed democracy.”

“U Khin Maung Zaw is good, but no matter what he does in this case, the judge will rule as ordered by the military,” said U Kyee Myint, another veteran human rights lawyer.

In May, a lawyer representing other detained members of Myanmar’s elected government was arrested at a courthouse. Knowing the risks, Mr. Khin Maung Zaw went into hiding after taking on Ms. Aung San Suu Kyi’s case. But after a couple of months, he returned home. He has only his own safety to guard, he said. His father died a decade ago, his wife four years ago. They had no children.

“I have no distractions or family that they can use to restrain me,” Mr. Khin Maung Zaw said. “I am free, free to dedicate myself to the law.”