Tracing the steps of a Covid-19 patient, such as where he ate lunch last week, can be laborious, often because many people cannot remember mundane matters.

But technological tools such as TraceTogether and SafeEntry, introduced a few months after the pandemic hit Singapore about a year ago, have helped tremendously to make the process easier and faster, said contact tracers from the Ministry of Health (MOH).

More than 80 per cent of the population is now on the Trace Together programme, up from 78 per cent over two weeks ago.

Mr Narasimhan Rao, 38, who has been a contact tracer for about nine months, said it was tedious in the early days.

Patients usually did not deliberately withhold information, said Mr Rao, who interacted with members of the public when he used to work in the aviation sector.

Another contact tracer, Mr Lin Zhaoquan, 34, said initially, patients are usually given the benefit of the doubt. “When it comes to finer details, they (often) can’t remember,” said Mr Lin, who has been on the job for about four months. He used to be a leading steward at Singapore Airlines.

Mr Lin said in one instance, a patient told contact tracing officers that he recalled being on leave and was not working on certain dates. But investigations through other sources showed he had been working on the morning shift at the time.

SafeEntry check-in data confirmed that he was at work, said Mr Lin. The patient’s TraceTogether data also showed he had been in close contact with some colleagues who were therefore at risk.

A tracer can make about 30 to 50 phone calls a day, but when the number of new daily infections was in the hundreds, such as in May last year, the calls doubled.

TraceTogether and SafeEntry data can easily halve the amount of time taken for contact tracing.

Associate Professor Vernon Lee, head of MOH’s contact tracing centre, said the time span from the moment a patient is identified, to when he and his close contacts are quarantined, could take four days. But this could be reduced to less than two days with the data and better investigative abilities now at hand. Depending on the complexity of a case, it could even be less than a day.

The TraceTogether app, announced last March, exchanges Bluetooth signals with nearby users to quickly track those who are exposed to Covid-19 patients.

SafeEntry, announced a month later, logs the places a person has visited via QR code scanning.

The Government is worried that people are not using TraceTogether because of concerns that its data could be used for police investigations into serious crimes, instead of only for contact tracing, said Prof Lee, who is also director of MOH’s communicable diseases division.

He warned of the risks of not employing the technology to help fight the virus. “Every minute more we spend on contact tracing means a minute more for the virus to transmit,” he said, adding that using these apps helps “protect yourself and the people around you”.

Prof Lee said that if there are no safety measures – such as contact tracing, mask wearing and safe distancing – to slow the spread of the virus, “within months, the population (in Singapore) can be overcome and infected by Covid-19”.

Mr Lin said his previous experience has come in handy in his current role as a contact tracer which, on some occasions, can be trying.

“Sometimes, (people) just want to vent their frustrations. You need a big heart and to listen to what they want first, and then direct this to relevant stakeholders,” he said. 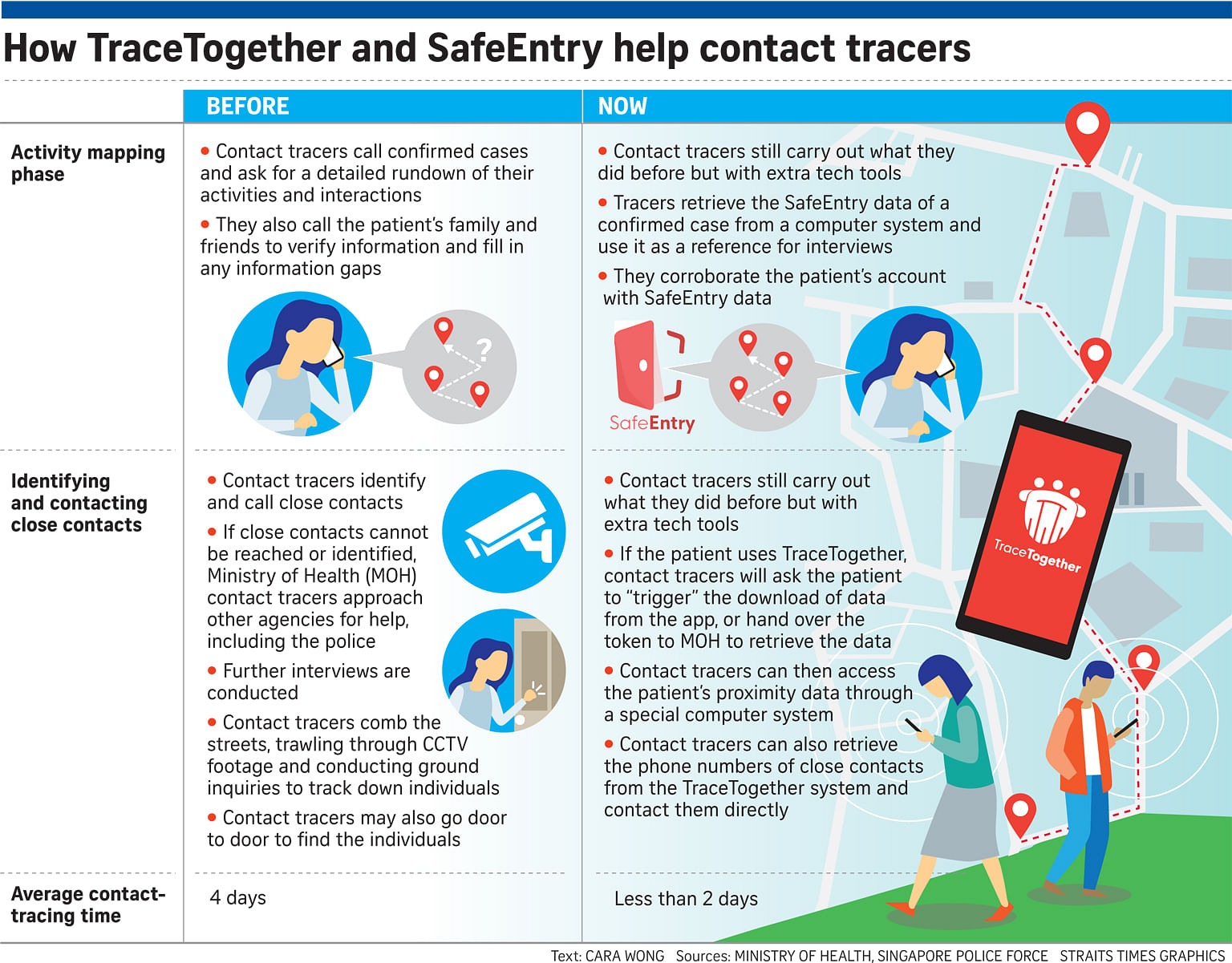