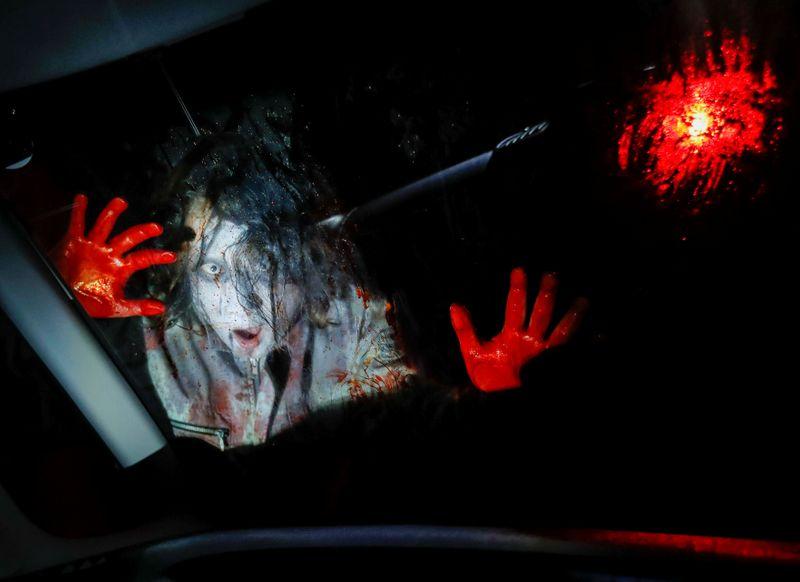 TOKYO (Reuters) – A Japanese performance group is starting a run of drive-in horror shows for people who are scared of catching the coronavirus but still want to get close-up frights from ghouls and zombies.

Audience members will drive into a garage in Tokyo, one car at a time, and listen to a murder story and sound effects blared out of speakers, as actors dressed as monsters bang on the side of the vehicle and spray fake blood over the windows.

The performance group Kowagarasetai – which roughly translates as the “scare squad” – is hoping to frighten as many as 11 carloads of people a day at weekends in July and hopefully August, coordinator Kenta Iawana said.

Each group will pay up to 9,000 yen ($84) for the experience, he added. Shows last for about 15 minutes until the shutter goes up and another group comes in, and customers without a car can borrow one.

Kowagarasetai put on regular walk-in shows at theme parks before the pandemic. But bookings dried up as venues closed and people stayed home. They have tried socially-distanced shows, but performers had to stay two metres away so it was all a “bit boring” said Iawana.

“The drive-in will let people experience our haunted house shows,” he told Reuters. “We might continue them even after the coronavirus has gone.”

Japan has fared better than the worst-hit countries during the pandemic and the government last month declared an end to a health emergency that had closed bars, restaurants and other public spaces.

But cases in Tokyo have risen over the past week, with the daily infection tally exceeding 100 on Thursday and Friday.